Hanoi (VNA) – More than 30 million smartphone users had downloaded Bluezone, a locally-developed app that helps determine if a person has come in contact with a COVID-19 patient, as of 11:30 am on March 2.

At present, over 30 million Bluezone users can make online health declarations on this app.

In addition, people can also inform authorized offices of cases suspected to be infected with COVID-19 via the app.

Currently, Vietnam has basically put the pandemic under control. However, people are recommended to continue installing and using Bluezone continuously to help trace any possible contacts with COVID-19 patients accurately.

It helps health authorities quickly track those who had close contact with virus carriers, and alert them about the risk of infection.

The app is completely confidential, anonymous, and transparent, as it only stores data on the user’s phone and does not transfer a user’s information or locations to the system.

The development of Bluezone was overseen by MIC and the Ministry of Health (MoH). It was launched on April 18.

Vietnam aims to have 50 million downloads of Bluezone, which is hoped to become an useful tool to help the health sector control the pandemic, and protect smartphone users from the disease./.

Some 238.2 million doses will be distributed around the world by the end of May through the program aimed at boosting access to coronavirus jabs in poorer nations.

Though vaccination campaigns have gathered pace globally, the majority of injections have been administered in wealthier countries while many nations have yet to receive a single dose.

The Covax scheme, aimed at ensuring equitable access to Covid-19 vaccines, on Tuesday outlined plans to deliver to 142 countries and territories by May 31, in its first wave of distribution.

Iran, Myanmar, Kenya and Uganda are also in line for more than three million doses each.

Overall by the end of May, India is likely to be the biggest recipient of Covax doses, but its allocation was not finalized before the publication of the distribution list on Tuesday.

The Pacific island nation of Tuvalu is meanwhile set to receive the smallest number of doses at 4,800, followed by Nauru and Monaco with 7,200 each.

Covax is co-led by the World Health Organization (WHO), the Gavi vaccine alliance, and the Coalition for Epidemic Preparedness Innovations.

The scheme is aiming to distribute enough doses to vaccinate up to 27 percent of the population in the 92 poorest participating economies by the end of the year, with at least 1.3 billion doses intended to go their way.

“Covax’s mission is to help end the acute phase of the pandemic as soon as possible,” said Gavi chief executive Seth Berkley.

Nigeria, Angola, Cambodia all received their first vaccine doses via Covax on Tuesday, with the DR Congo also scheduled for a delivery.

Senegal was set to get its first batch on Wednesday, and some 20 countries in total are due to receive shipments this week.

He said Tuesday it was “imperative” that Africa develops its own vaccine production capacity to facilitate easy and affordable access to doses.

The African Union Commission will host a meeting on April 12 aimed at developing a roadmap for the continent to start manufacturing Covid-19 vaccines.

Some 198 countries and territories are participating in Covax, though not all are in the first wave of distribution.

For the 92 lower- and lower-middle income economies in the scheme, funding is covered through donations.

For richer countries, buying into Covax’s bulk purchases operates like a back-up insurance policy for their own direct deals with vaccine producers.

Some wealthy countries were on the distribution list, with South Korea in line for 2.2 million doses, Canada 1.6 million, Saudi Arabia 1.5 million, Singapore 245,000 and New Zealand 211,000.

Any vaccine being rolled out through Covax requires the WHO seal of approval – so far given to just the Pfizer and AstraZeneca jabs.

Novavax will provide 1.1 billion Covid-19 vaccine doses to Covax, while the facility has also signed deals with Sanofi-GSK, and with Johnson and Johnson.

The Hanoitimes – The purchase confirms that Russia is the biggest arms supplier of Vietnam.

Vietnam signed a US$350 million deal in 2019 to buy a dozen of combat training aircraft from Russia, the Vedomosti business daily reported on January 28.

Yak-130 jet is designed for training pilots of advanced fighter aircraft. It can also be equipped with air-to-surface weapons including guided missiles and bombs.

According to Vedomosti, Vietnam would be the sixth country to import the Yak-130, following Algeria, Bangladesh, Myanmar, Laos, and Belarus.

The contract paves the way for the purchase of more advanced jets from Russia, including the Su-30SM and the Su-35, military expert and Arms Exports magazine editor-in-chief Andrei Frolov was cited as saying.

Russia is the biggest arms supplier to Vietnam and Southeast Asia. In 2018, Vietnam ordered a fleet of Russian-made fighter jets, surface ships, and submarines worth more than US$1 billion, according to the state-run TASS news agency.

Vietnam has been one of the world’s most active arms importers in recent years, according to Reuters.

Hanoi stepped up its imports amid China’s increasingly aggressive territorial claims in the South China Sea, where the neighbors have long-standing rival claims.

Vietnam is ranked 23th out of 137 countries and second in Southeast Asia after Indonesia in the military strength ranking 2019 of US-based Global Firepower.

The rating is based on 55 parameters, including military resources, diversity of weapon systems, natural resources, geographical features, finances and available manpower.

HCMC – Foreign experts providing training to drive the trains of HCMC’s first metro line, which connects the landmark Ben Thanh Market in downtown HCMC and the Suoi Tien Theme Park in District 9, would be paid a salary of over VND500 million each.

According to the investor, these are the lowest salary levels earmarked for foreign experts under an original contract that it signed with NJPT in 2007. Also, the salary amounts are equivalent to those of a project in Indonesia’s Jakarta and approved by the Japan International Cooperation Agency, which is the project’s sponsor.

For local experts who will teach the driving, the investor suggested the deployment of a lump sum contract. Besides this, the costs to organize driving tests for 58 metro drivers who are joining a training course to drive the trains will be worked out before the tests take place.

Aside from salaries for driving instructors, MAUR suggested the foreign experts of NJPT each receive an allowance of 11,500 Japanese yen per day, or some VND2.5 million. This amount is lower than NJPT’s previously suggested figure of 12,000 Japanese yen. 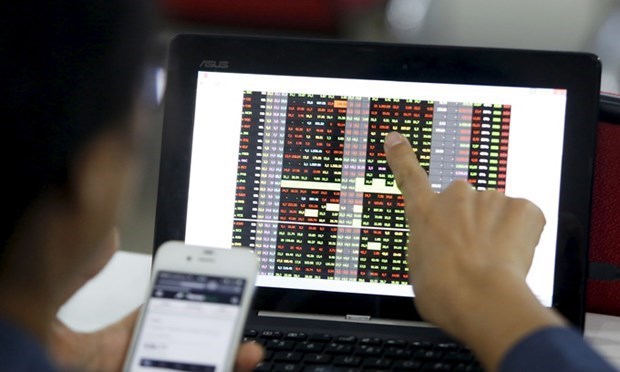 Exchange-traded funds (ETFs) on Việt Nam’s stock market have net attracted a total of US$130 million so far this year. Photo cafef.vn

HÀ NỘI — Exchange-traded funds (ETFs) on Việt Nam’s stock market have attracted a net total of US$130 million so far this year.

Capital inflows into ETFs from the beginning of the year have made an important contribution to help offset the net selling from foreign investors, valued at more than VNĐ2.7 trillion ($117.1 million).

On the other side, KIM Kindex VN30 ETF saw a strong net recession of nearly $52 million, equivalent to VNĐ1.2 trillion and was the only ETF witnessing net withdrawal in the first two months of the year.

VFMVN30 ETF was the fund seeing the strongest withdrawal, with VNĐ345 billion.

Another ETF that also saw withdrawal was KIM Kindex VN30 ETF, with a value of $4.53 million in the past week.

Most notably, real estate attracted the majority of the sum with US$145.1 million, or 43% of the overall total. This was followed by science-technology with US$57.5 million, 17% of the total, and the processing-manufacturing industry at US$41 million, representing 12.1%, according to figures released by the municipal Department of Planning and Investment.

As a major economic hub in the region, the southern city was only able to lure three new foreign investment projects worth US$115 million during January and February due to a range of complex developments caused by the global impact of the novel coronavirus (COVID-19) pandemic.