Hai is without doubt one of the most important players in the national team under South Korean manager Park Hang-seo. He is also regarded as one of the best Vietnamese footballers of his generation. The 23-year-old midfielder’s trophy cabinet includes three V. League titles, one Super Cup and one National Cup that he won with Hanoi FC.

In 2018, he helped U23 Vietnam finish second at the AFC U23 Championship by scoring important goals. A few months later, Hai won the AFF Cup with the national team and in 2019, the SEA Games gold medal with the U22 team.

It is a widespread belief that the year of a person’s zodiac animal, which comes around once every 12 years, can be challenging for that person. But Hai said he didn’t mind the challenges that he will face this year.

“Many people say your zodiac year will be unlucky, but I think I also had some bad luck in 2020. The important thing is how you accept them. I have been through a lot so nothing can knock me down. I will welcome everything with peace and positivity.”

Another bright prospect for Vietnamese football, Trong, has the maturity and resilience of a veteran defender at his young age. His star shone brightly in 2018 as he won the V. League and Super Cup with Hanoi FC; and became one of the key defenders in Vietnam’s AFF Cup victory.

However, after Asian Cup 2019, where Vietnam finished in the top eight, Trong has been struggling with knee injuries. The center-back has undergone three surgeries in two years and hasn’t been on top of his form. But whenever he is healthy, Trong is a top defense choice for coach Park.

Fans are hoping that Trong can return to form and be ready to serve the national team this year.

Tai is a valuable right-back for the national team. With his ability to strike a good balance between offense and defense and score goals, he has the potential to become the number one right-back for Vietnam.

Tai has proved himself in the Becamex Binh Duong shirt from 2017 to 2020. In 2021, he joined the newly-promoted side Topenland Binh Dinh and has continued his good form at the new club. Coach Park has called Tai up to the national team several times and he is expected to represent Vietnam in upcoming tournaments this year.

A key striker for both Becamex Binh Duong and the national team, Linh is known for his positioning and finishing skills. Vietnamese fans still remember the stunner that he pulled off in the World Cup Asian qualification game against UAE in 2019, which helped Vietnam win 1-0 and sent them to the top of the group.

Linh’s other achievements include winning the AFF Cup 2018 with the national team and a SEA Games gold medal with the U22 team in 2019.

“Of course I acknowledge that it’s my zodiac year. However, it doesn’t affect me too much because keeping your mind comfortable is most important. There may be many big tournaments this year, so maintaining my form and physique will be a challenge. As a professional player, I will focus on this rather than worry about bad luck.”

Once the number one goalkeeper in the national team, Dung’s form has slipped in recent years, displaying inconsistency and making mistakes. He has lost his position to Dang Van Lam in the national team. He has been rarely fielded even at the club level and has not made much of an impression in the few chances he has had to play.

The HCMC FC player will have to compete with three other keepers in the club this year, but he is not giving up. He said he would do his best and fight for his position.

Italian football giants Juventus are scheduled to open their academy in the southern Vietnamese province of Ba Ria-Vung Tau next week.

This is the very first football school of the Serie A giants in Southeast Asia.

The academy will start selecting talents in Ba Ria-Vung Tau on August 10, followed by Ho Chi Minh City on August 11 and 12, the Mekong Delta city of Can Tho on August 13, the central city of Da Nang on August 15, Hanoi on August 17, and the north-central province of Ha Tinh on August 19.

The targeted learners are football lovers between nine and 12 years old.

Coach Park Hang-seo said that he would come back to work soon and try to work hard to improve the national team’s results.


Coach Park Hang-seo arrived in Hanoi on February 3 after a holiday in his home country of South Korea. He was now on a 21-day quarantine period for Covid-19 prevention following regulations from the Vietnamese government.

Under the leadership of coach Park Hang-seo, the Vietnamese national football team finished as runners-up at the Asian Football Confederation (AFC) U23 Championship, champions of the AFF Cup 2018, qualified in semi-finals of the 18th Asian Games and made the 2019 Asian Cup quarter-finals. 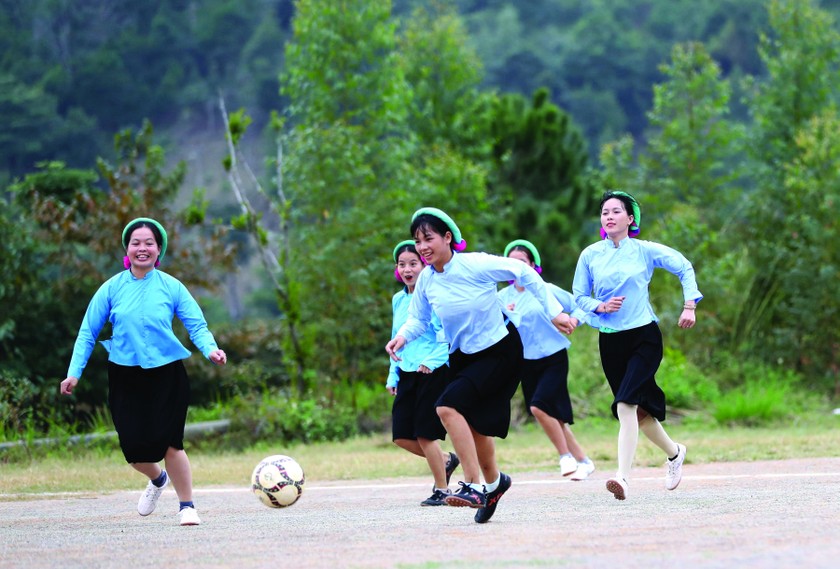 When the crew arrived in front of the commune’s community house, they saw an empty gravel lot with a makeshift goal and white chalk lines that outline the field.
They were greeted shortly by a flock of ethnic women in black dyed dresses, two-pieced blue shirts and cloth headgears that keep their hair neatly in place, with the only non-traditional accessories being the fabric sneakers.
Each team consisted of seven women who knew exactly what they were doing and did not mind bumping into each other while taking and passing the ball. 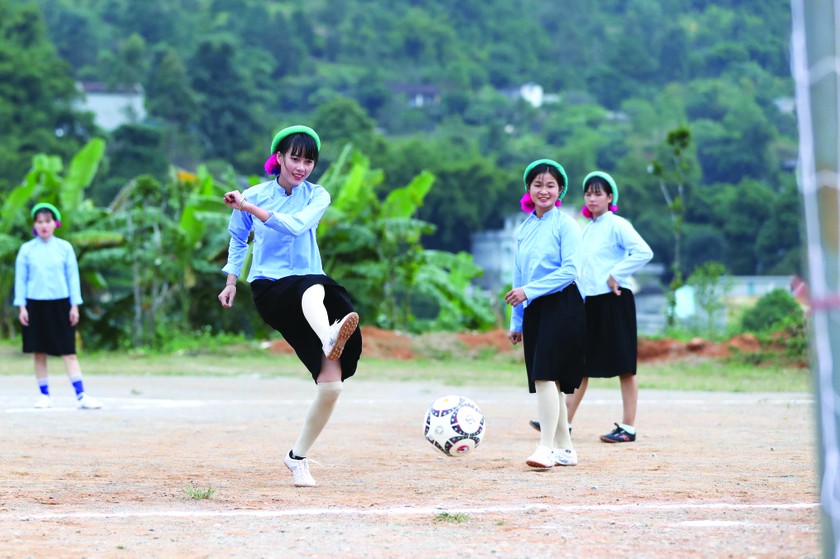 Among the spectators of locals are the footballers’ husbands cheering them on and shouting out directions while still holding their babies.
20 minutes flew fast and the women took a halftime break to chat and get some refreshment, some even casually breastfeed their baby.
One of the youngest females of the group is La Thi Thao, a 16-year-old girl from Na Ech Commune. “My parents and big brother all play football, so I want to join the football team at both my school and the community house. I hope more of my school mates would take up sports to improve their health and stay away from problematic hobbies”, she said. 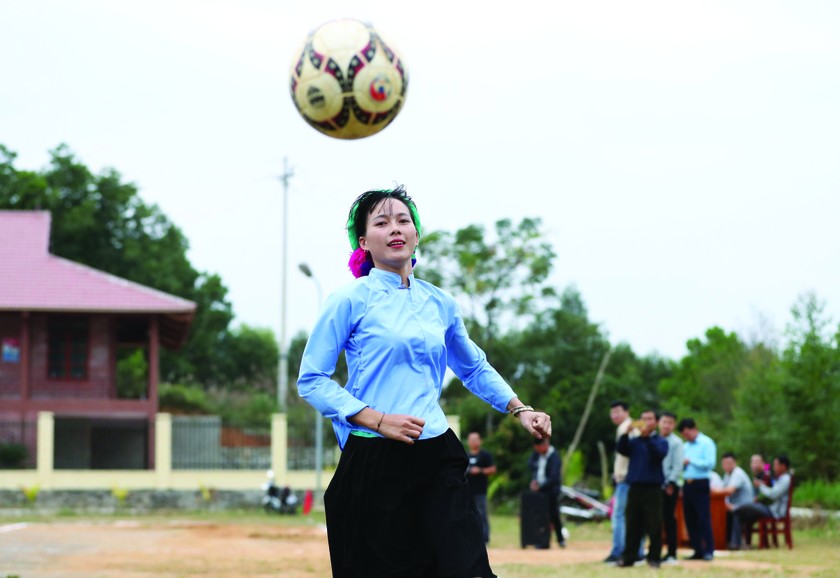 According to local official Nguyen Van Duoc, football has only been popular among female San Chay people for about five years, and over 80 percent of the 2,600 in Huc Dong Commune are of the San Chay ethnicity.
Although it is not a traditional sport, Huc Dong authorities have encouraged and promoted female football within the commune, and it has since become a staple of local tourism.
On the subject, the UNESCO Representative to Vietnam Michael Croft, during his business trip to Quang Ninh, expressed his appreciation for the natural beauty and unique culture of Huc Dong as well as the ethnic women’s football match. According to Croft, these football matches are an expression of gender equality and a smooth combination of traditional costumes and international sports which should be preserved.
“San Chay women harbor a genuine love for sports even when they had to spend their whole life working in the mountains. But now they can embrace football as a way to improve their physical and mental health, and also promote the unique cultural beauty of local ethnic groups and tourism”, said Mr. Duoc. 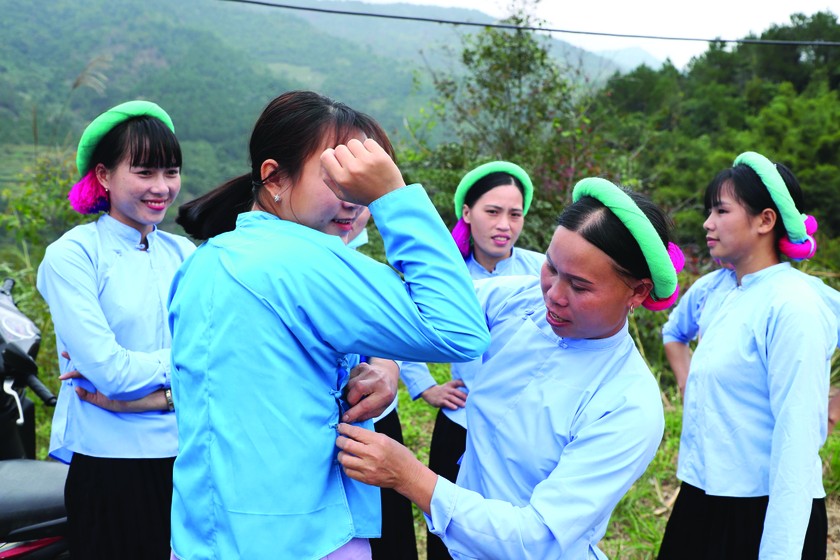 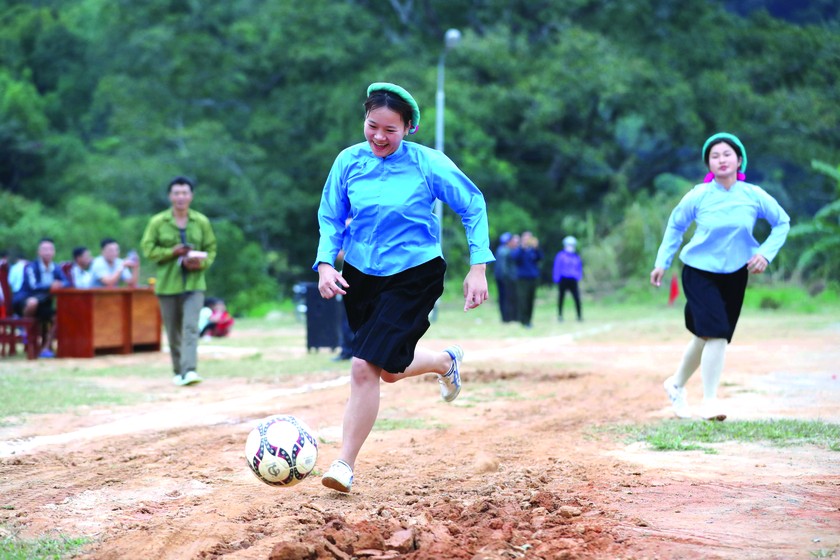 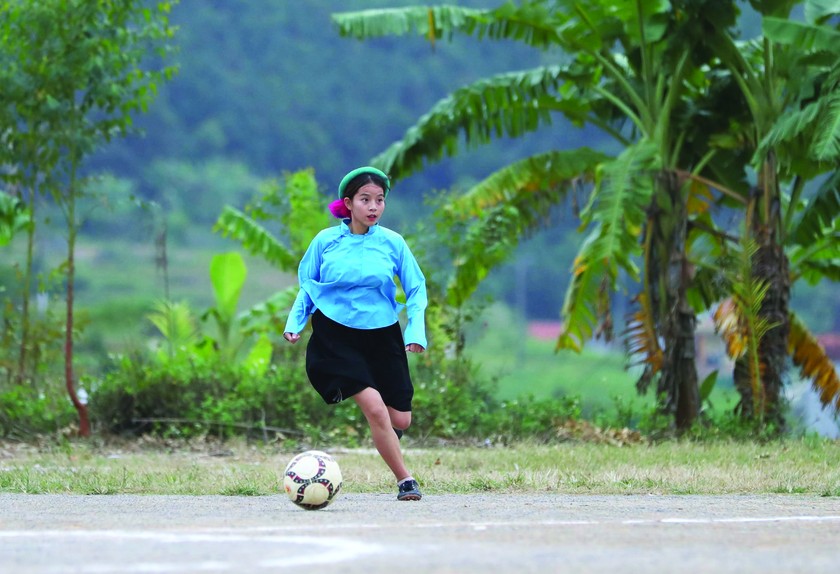 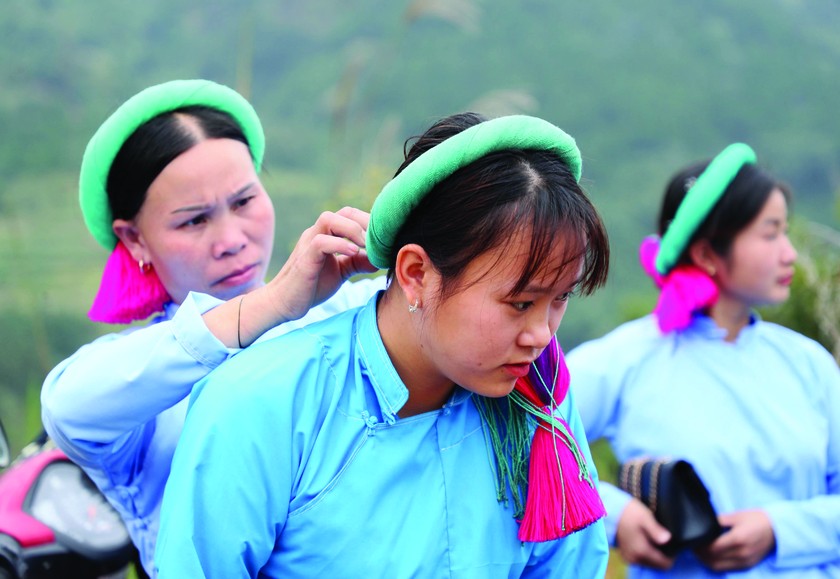 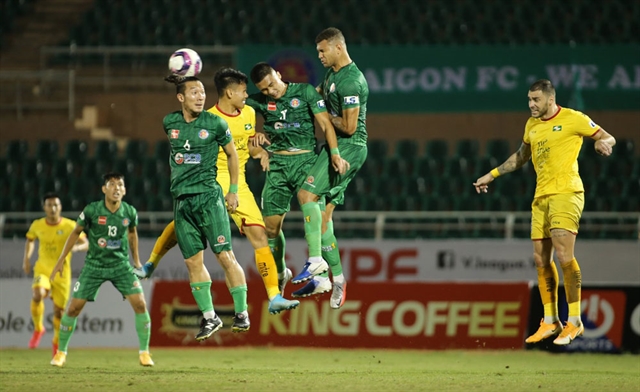 Players compete in the match between Sài Gòn FC (in green) and Sông Lam Nghệ An in the third round match of the V.League 1 tournament on January 30. Although the COVID-19 forced a delay of the tournament one official has promised football would soon return. Photo courtesy of VPF

Việt Nam football was the highlight in 2020 with stadium opened for fans and tournaments ended successfully while elsewhere in the world games were cancelled or played at empty stadiums.

The national 2021 season started with two rounds and one game of the third round before it was delayed when COVID-19 spread in the community in January.

All competitions of the national teams and clubs such as the 2022 World Cup qualifier, AFF Cup and the AFC tournaments in 2021 were affected.

But Chóng said the national football governing body had been working tirelessly to get matches restarted.

“VFF’s departments have worked closely with each other and coaching boards of all teams to build up schedule for 2021,” he said.

“We also discussed with the Việt Nam Professional Football Company (VPF) to arrange a timetable for the national championships to make sure that these events would be organised well in time and players have time to play for the national teams,” said Chóng.

“You can see that we have made good preparation so far. Both national squads and the U22s had intensive training camps and friendly matches where we checked their performance.

Regarding the V.League 1 Chóng said the first two rounds were a success when clubs showed their good preparation for the new season although they faced big difficulties due to the COVID-19.

“They prepared for their form and physique and also seriously followed regulations of COVID-10 protection and control. It could be seen through the first matches of the season,” he said.

According to Chóng, VFF thought about every situation which can happen due to COVID-19.

He added: “The 2021 would follow steps that we did well in the 2020 season like format of the tournament, security activities and COVID-19 rules. This year we will work more closely with all partners and localities to ensure the quality and competitiveness.

“I believe that in case of unexpected situations, we would have enough time to adjust everything. But despite challenges I think the 2021 would happen successfully.”

But the VFF Vice President said that problems including poor quality of refereeing have been revealed from the early rounds.

Chóng said: “Training courses for referees were held weeks ahead of the tournaments. They were checked of fitness and updated the latest regulations and laws.

“However, refereeing is always a difficult job in all tournaments and we are trying to filter the best ones together with open training classes to lure more good ones. Our referees also promise to try their best to meet people’s demands.” VNS

Hanoi – The national men’s football team is ranked 94th in the latest FIFA rankings, with 1,258 points.

Vietnam witnessed a strong surge in rankings in the past 10 years, leaping by 43 spots from the 137th place in 2010.

Meanwhile, the women’s squad came at the 34th place in the FIFA rankings with 1,657 points.