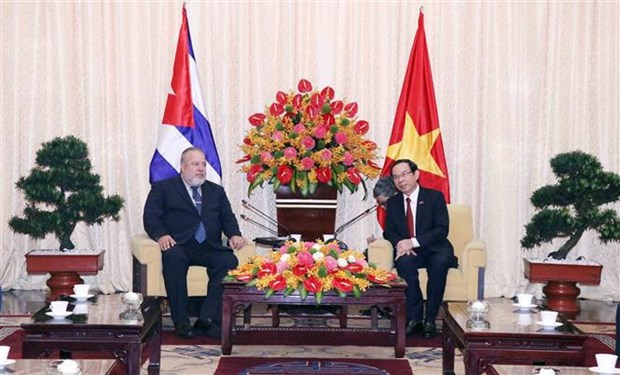 HCM City (VNA) – There is plenty of room for cooperation between Cuba and Ho Chi Minh City , particularly in the fields they are both strong in or of mutual interest, to develop further, said Secretary of the municipal Party Committee Nguyen Van Nen on October 1.

He made the statement during his meeting with Cuban Prime Minister Manuel Marrero Cruz who was on the first visit to HCM City.

Despite being severely impacted by the COVID-19 pandemic, the ties between Cuba and HCM City have seen good progress, especially in bilateral trade, Nen said, adding expects the Cuban leader to push for a strong partnership in trade promotion, tourism, health care, education and medical personnel training.

HCM City wishes to beef up relations with Cuba in the areas which the country has advantages in, such as pharmaceutical technology, community health worker training, primary health care, and tourism; and to accelerate cultural and youth exchanges.

The official held that with the concerted efforts and determination of both sides, HCM City will gain more opportunities to strengthen ties practically and effectively with Cuba, contributing to consolidating the special friendship between the two countries.

Informing his host of the outcomes of his talks with Vietnamese PM Pham Minh Chinh, the Cuban PM said the two sides had agreed to further boost the bilateral relations in all areas. In the short run, the two governments will together resume cooperation in multiple fields, with priority given to boosting Vietnamese investment in Cuba, sharing experience to assist Cuba to expand production of rice, coffee and maize, aquaculture and renewable energy.

He agreed with Nen's proposal, emphasising that Cuba seeks to translate opportunities for cooperation with HCM City into reality, particularly in high technology and pharmaceutical chemistry.

In his trip to HCM City, the Cuban PM paid a visit to historic relic Cu Chi Tunnels and Saigon Hi-tech Park./.

Plenty of room for Cuba-HCM City relations to thrive: Official have 488 words, post on en.vietnamplus.vn at October 2, 2022. This is cached page on Talk Vietnam. If you want remove this page, please contact us.