The delegation visited the resettlement area of Loc An – Binh Son and the Long Thanh Airport construction site, then worked with leaders of Dong Nai Province and Vietnam Airlines Corporation (ACV) afterward.

At the meeting, Chairman of Dong Nai Provincial People’s Committee Cao Tien Dung said that the Long Thanh Airport phase 1 project has more than 5,340 hectares and so far has been recovered and handed over 95 percent of the area, of which the prioritized area of 1,810 hectares have completed the compensation and basic support plan. For the rest 100 households, the province will finish compensation for site clearance and handover in October 2022. 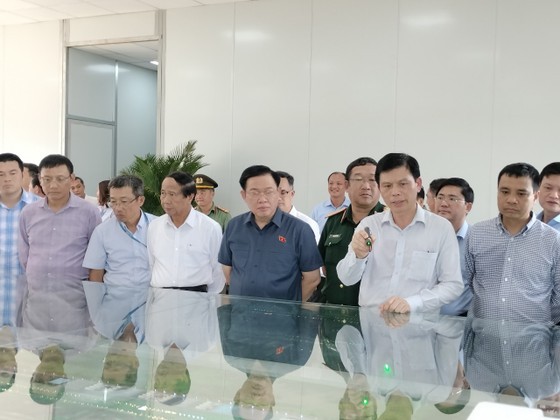 The Chairman of the Provincial People’s Committee proposed the Chairman of the NA and the central ministries support the province in building four road routes connecting the airport with about VND5 trillion and keeping a part of the money to support connecting the airport area. And money arising from land acquisition, compensation, and resettlement will be used for compensation and clearance of key projects of the Central government in the area.

Mr. Lai Xuan Thanh, General Director of ACV, added that the mine clearance work had completed 100 percent of the ground leveling area. All 1,560 pile foundations have been completed to build the terminal body – the core package of the entire project. It is expected that the terminal construction period will be 33 months so that phase 1 can be tested in June 2025 and completed by the end of 2025. ACV proposed that Dong Nai Province soon finish compensation for site clearance and expand the HCMC – Long Thanh – Dau Giay Expressway to 8-10 lanes. 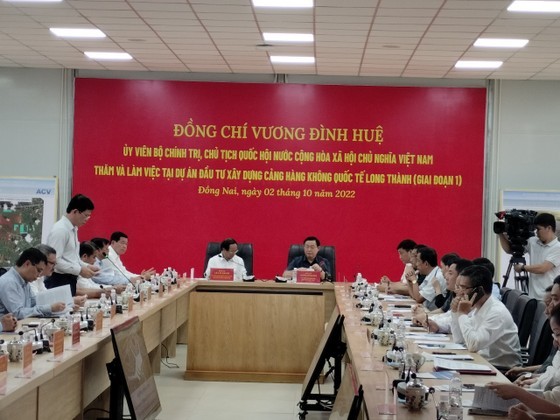 The scene of the meeting. (Photo: SGGP)

According to NA Chairman Vuong Dinh Hue, Long Thanh Airport is the work of the century but its construction progress used to be quite slow. Recently, there has been a positive change, and the project has had the shape of a great construction site. The basic difficulties have been overcome, so it is time to accelerate the construction progress of project categories. The project completion time is only three years, so authorities and investors must work with a high sense of responsibility and full of enthusiasm. 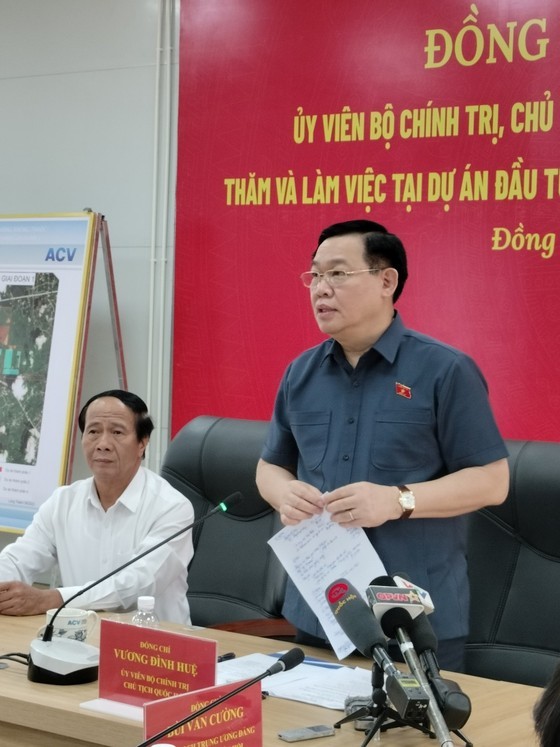 The NA Chairman emphasized that the People’s Committee of Dong Nai Province needs to focus on site clearance, and taking care of health care, education, and job change for people living in the resettlement area of Loc An – Binh Son to have a better life. Dong Nai Province and ACV summarize difficulties and obstacles in terms of capital, build connecting roads with Long Thanh Airport, and report to the Government for submission to the NA for consideration and settlement.

* On the morning of the same day, the delegation also inspected the construction site of the Ben Luc – Long Thanh Expressway.

NA Chairman Vuong Dinh Hue listened to the Vietnam Expressway Development and Investment Corporation's (VEC) brief report on the project’s progress. Specifically, the Ben Luc – Long Thanh Expressway project, with a length of about 57.8km, started construction in 2014 with a total investment of VND31.32 trillion (US$1.6 billion) and was planned to be put into operation in 2019, then adjusted to before December 31, 2023. Due to problems with loans from the Japan International Cooperation Agency (JICA), reciprocal capital, procedures for approving the policy of using residual capital, and the time arising in the process of selecting a new contractor for packages J1 and J3, VEC proposed the Prime Minister approve the policy of extending the project completion time to September 30, 2025.

NA Chairman checks construction progress of Long Thanh Airport project have 884 words, post on www.sggpnews.org.vn at October 2, 2022. This is cached page on Talk Vietnam. If you want remove this page, please contact us.