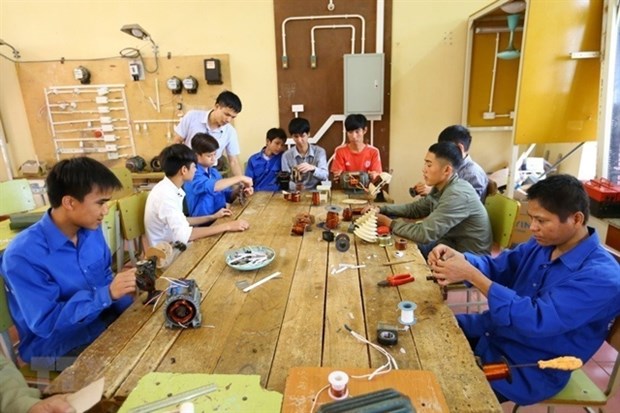 People with disabilities attend a job training class at a vocational school in the central province of Thanh Hoa. (Photo: VNA)

Hanoi (VNS/VNA) – There is a serious shortage of data on specific groups of Persons with Disabilities (PwDs) in Vietnam, especially those who are most marginalised, including persons with hearing and learning difficulties.

Representatives of the United Nations Development Programme (UNDP) Vietnam, Vietnam Federation on Disability and the General Statistics Office (GSO) held a consultation workshop regarding the issue on October 6.

Speaking at the workshop, Patrick Haverman, Deputy Resident Representative of UNDP in Vietnam, said that according to the latest UN analysis, out of the 158 sustainable development indicators of Vietnam (VSDGs), only eight require data regarding those with disabilities.

Among these eight indicators, only two (the number of beneficiaries of monthly social allowance in the community, and number of people living and being cared for in social protection facilities or social housing) are collected by both the General Statistics Office and the National Council on Disability (NCD) through statistical surveys and reporting.

Data of half of the eight indicators to assess the level of disability inclusion in different areas of VSDG are not collected by NCD, such as the proportion of the population satisfied with their most recent experience of public services.

"It is difficult to find disability data; and when found, it is unclear which source should be cited due to the inconsistency of data reported by different Government agencies," he said.

"It is important to make PwDs more visible in our national database and to have more indicators disaggregated by disabilities in VSDGs, which helps us better understand PWDs' vulnerability and needs," he said.

"UNDP is supporting the development of a set of output indicators for the National Survey on Persons with Disabilities in 2023 to be comprehensive and align with international standards," Haverman said.

Dang Van Thanh, vice president of Vietnam Federation on Disability , said there were about 6.2 million people with disabilities in Vietnam including more than 700,000 children.

He said that the number of people with disabilities in Vietnam released by different agencies was different from each other.

This crucial information was a foundation to design and develop activities and policies, for example, social welfare, education or healthcare, he said.

"The more exact the input information is, the better the outputs are," he said.

Deputy head of the GSO Le Trung Hieu said that Vietnam was preparing for the second national survey on people with disabilities next year.

The first National Survey on PwDs was done in 2016, using an internationally standardised toolkit for measuring disability. That survey was part of the National Statistical Survey Programme.

“Through that survey, for the first time, we had an overview of the disability rate in the general population nationwide, types and degrees of disability, as well as PWDs' living conditions and the level of PWDs' integration in a number of areas such as healthcare, social protection, education, employment, and a comparison of disability rates between socio-economic regions,” said Hieu.

Until now, there have been many reports by State agencies, organisations and for persons with disabilities, and disability experts still using data published in this survey.

After six years, the 2016 National Survey on Persons with Disabilities (VDS 2016) no longer accurately reflects the current situation of PWDs in Vietnam, Hieu said.

"The data needs to be updated and supplemented to better support the monitoring of disability-inclusive socio-economic development programmes and policies, and to better meet the law and policy-making requirements in line with international commitments, particularly the upcoming amendment of the Law on Persons with Disabilities, the monitoring of the implementation of disability-mainstreaming laws, policies, and the International Convention on the Rights of Persons with Disabilities (CRPD)," he said.

The GSO has proposed a set of 53 indicators to be disaggregated by disabilities, covering ten Sustainable Development Goals. The indicators can be used not only for the survey next year, but also serve the disability data disaggregation in other national statistical surveys, contributing evidence to the development of disability-inclusive socio-economic policies and programmes.

Nguyen Dinh Trung, a GSO official, said that in Vietnam, according to the national population census 2009, people with disabilities made up 7.98% of the country's population aged from five.

"Data about people with disabilities in Vietnam still fails to meet increasing demands of data users, especially in policy making, monitoring and assessing the implementation of relevant laws as well as the implementations of international commitments that Vietnam has made," Trung said,

He said that GSO was developing plans to conduct the second national survey on people with disabilities in September and October next year, collecting responses of 75,000 households nationwide.

In addition, questionairs would also be offered to social sponsor centres which take care and offer services for people with disabilities. The survey will also collect information from commune/ward people's committees, ministries, agencies, schools and grassroot healthcare centres.

Vu Thi Kim Hoa, deputy director general of Child Affair Department under the Ministry of Labour, Invalid and Social Affairs, suggested that it was necessary to collect information about children with disabilities, which would help to better ensure child rights and address child-related issues./.

More data needed on people with disabilities in Vietnam have 1073 words, post on en.vietnamplus.vn at October 7, 2022. This is cached page on Talk Vietnam. If you want remove this page, please contact us.