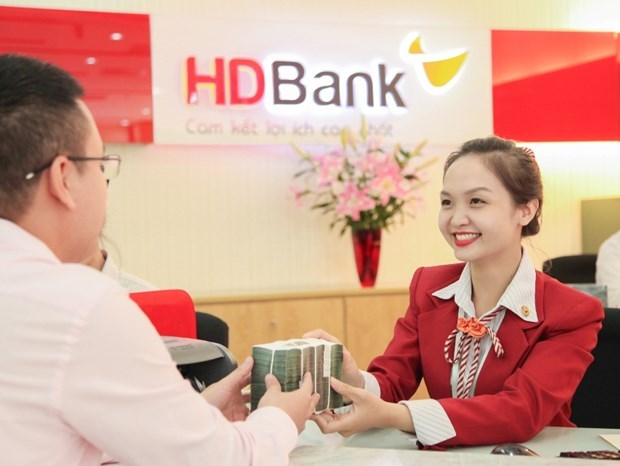 A customer at an HDBank office in Hanoi (Source: VNA)

Hanoi (VNS/VNA) – Businesses have faced difficulties in access to capital and commercial banks want to be able to lend freely to meet market demand. However, experts said the imposition of the credit growth cap is still necessary to keep the country's macro economy stable in the short run.

Based on the credit growth quota for the entire banking industry, the SBV will determine the credit growth for each commercial bank depending on its financial health, with indicators including capital, asset quality, governance, business performance results, liquidity and sensitivity to market risks. The SBV will consider other criteria related to its implementation in meeting policies and orientations of the Government and the SBV to give credit growth priority, such as reducing lending interest rates to support firms and people, focusing loans on business and production, and participating in supporting the handling of weak banks.

VNDirect Securities Company's analysis division said the 15 banks account for about 80% of total outstanding loans of the whole banking industry. With an additional credit growth rate of 1-4%, VNDirect's analysts estimate about 279 trillion VND was injected into the economy, compared to the end of August 2022.

However, not all banks were satisfied with the SBV's credit growth quota allocation. Some banks said they ran out of the allocated quota from the end of June and applied for an expansion many times, but weren't on the SBV's approved list. They were concerned as the credit growth quota regime can mirror the subjective imposition by the SBV without properly attending to the development plan of each commercial bank, which doesn't conform to the market-oriented economy and results in 'ask-and-give' deals. Meanwhile, commercial banks can map out their own credit growth targets based on their financial power and management capacity.

Businesses also disagreed with the tightening of the credit growth quota, saying it is unreasonable as the regime has been causing great difficulties for them in accessing loans and leading to the loss of opportunities for the country's economic recovery and development.

Despite the latest credit growth quota extension, firms said it isn't still easy to get bank loans as the capital remains restricted. Banks also said the SBV's credit growth adjustment in September is still quite low compared to their expectations.

As most banks ran out of the credit growth quota allocated by the SBV at the beginning of the year for more than three months, the waiting list of customers to get loans is very long. Meanwhile, the additional quota is very limited so it will be difficult to finance all the loan borrowing applications dated before September. With the new profile, banks said they may still approve, but are not sure about the disbursement. Many customers have met all loan criteria and have been approved, but customers still have to queue to get loans as banks have no credit quota to disburse.

Tran Thi Khanh Hien, Director of VNDirect Securities Company's analysis division, said the remaining credit growth quota for this year has not been able to quench the 'capital thirst' of firms and individual customers, but only partially clear up the congested capital flow in the last few months after banks ran out of the allocated credit quota at the end of June.

The SBV's data showed by the end of August, credit increased by 9.91% against the end of 2021, much higher than the 7.42% rate in the same period last year. The surge proved that the capital demand of the economy was very large and will continue to rise, especially at the end of the year.

However, experts said the credit growth quota is designed to boost lending for some banks without encouraging excessive credit growth so the measure is necessary and effective in the short term to stabilise the macroeconomy and control inflation.

Nguyen Minh Cuong, principal country economist of the Asian Development Bank in Vietnam, said in the near future, the regulation of the credit cap remains reasonable and has certain positive effects. The 14% credit growth cap for 2022 has been calculated by the SBV based on Vietnam's targets, such as inflation control at 4% and economic growth at 6-6.5%.

Commenting on the SBV's latest credit growth quota allocation in September, Cuong noted the SBV has made a flexible adjustment as it allowed some banks with safe capital adequacy and short-term/long-term lending ratios to increase the credit quota.

He said the flexible credit growth cap policy is effective in the short term, but the SBV should have a roadmap to eliminate it and use another tool to manage the monetary market more effectively in the long term.

According to Duc, risks related to bad debts and inflation often come later in Vietnam than in other countries. The risks will be serious if Vietnam doesn't actively prevent them. Unlike many other countries, high inflation in Vietnam is very difficult to handle and is much more heavily affected due to psychological and trust factors. Vietnam experienced bitter lessons in the past. Economic growth will become meaningless if inflation is high.

It is necessary to impose the credit growth quota and the central bank shouldn't change the regime, Duc noted, adding if the policy is removed, it must be replaced by another similar measure.

According to VNDirect's Hien, the SBV currently has to shoulder a significant role. Besides harmonising interest rates and credit growth factors to support economic recovery, it has to control inflation and contribute to macro stability.

"These are all challenges, which are even tougher under global volatility. Therefore, it is easy to understand that there will always be differing opinions on issues of public concern such as credit growth and interest rates," Hien said. /.

Credit growth cap remains indispensable for macroeconomic stability have 1273 words, post on en.vietnamplus.vn at October 3, 2022. This is cached page on Talk Vietnam. If you want remove this page, please contact us.