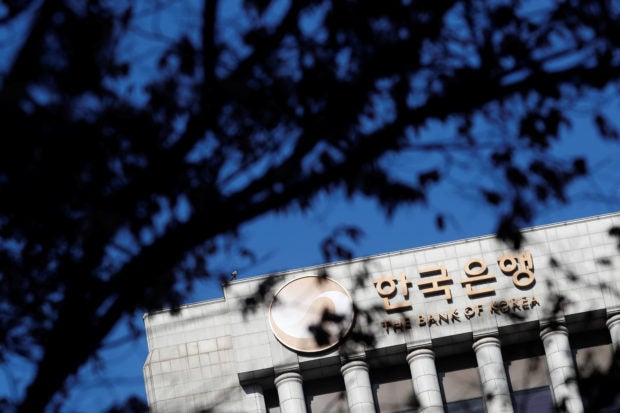 The logo of the Bank of Korea is seen in Seoul, South Korea. REUTERS/Kim Hong-Ji

BENGALURU  – South Korea's central bank will opt to go big again and hike rates by another half-point next week, pushing borrowing costs higher than earlier predicted to support a weakening won and dull its effect on inflation, a Reuters poll showed.

That change in forecasts comes in the wake of widening rate differentials with an aggressive U.S. Federal Reserve which has hinted it would keep rates higher for longer.

Already down over 15 percent this year, the Korean won was expected to drop another 1.6 percent by end-2022, a separate Reuters poll showed. That precipitous fall came despite the Bank of Korea (BOK) raising interest rates by 200 basis points since last August.

But expectations were for the BOK to stay the course and continue to hike interest rates over the coming quarters.

An overwhelming majority of 88 percent of economists, 23 of 26, in the Oct. 4-6 poll predicted the BOK to hike its base rate by 50 basis points to 3 percent at its Oct. 12 meeting. The remaining three expected a smaller rise of 25 basis points.

"Fending off FX pass-through onto CPI inflation will be the top priority for the Bank of Korea during the remaining period of the current hiking cycle," noted Kathleen Oh, economist at Bank of America Securities.

"The central bank is now set to change its original course of baby-step hikes to a 50bp hike, moving with the mighty hawks at the Fed."

The median forecast in the poll showed the base rate going to 3.25 percent by year-end and then peaking at 3.5 percent in the first quarter of 2023. That predicted top rate was higher than the 2.75 percent forecast in an August poll.

Nearly half of economists, 12 of 25, expected the base rate to reach 3.75 percent in Q1 of next year, suggesting the bias was toward borrowing rates climbing higher as inflation at 5.6 percent in September from the same month a year ago was far above the BOK's target of 2 percent.

"A comforting pullback in inflation will take time, and the BOK has made clear that inflation will remain its top priority if it remains between 5-6 percent," noted Krystal Tan, economist at ANZ.

The poll also showed inflation to average 5.2 percent and 3 percent this year and next, higher than the 5 percent and 2.7 percent predicted in a July poll.

Bank of Korea to go for second big hike on Wednesday: Reuters Poll have 645 words, post on business.inquirer.net at October 7, 2022. This is cached page on Talk Vietnam. If you want remove this page, please contact us.