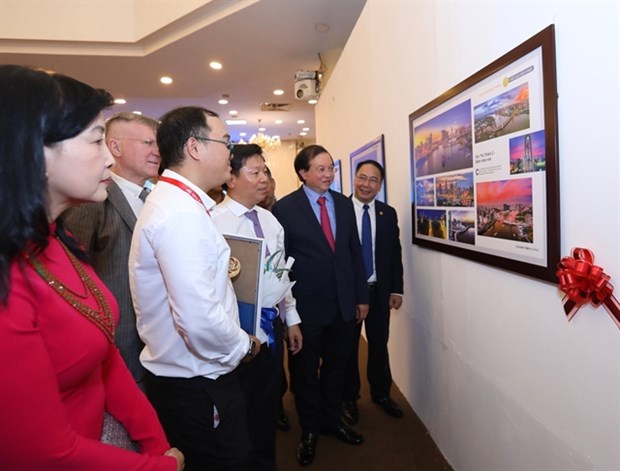 Deputy Minister of Culture, Sports and Tourism Ta Quang Dong (second from right) and delegates at the exhibition. (Source: VNA)

Hanoi (VNS/VNA) – The achievements of photographers from the past two years are on display at an exhibition in downtown Hanoi.

Titled ‘ Vietnam Art Photo Exhibition ‘, the biennial event features 250 works by 187 photographers. Over three months, the National Art Photography Contest 2022 gathered over 16,300 entries by more than 1,500 photographers. The entries have been divided into Realistic Photo and Conceptual Photo categories.

The best 29 works have been awarded, including one gold medal, four silver, eight bronze and 16 encouragement prizes.

Addressing the awards ceremony on October 6, Deputy Minister of Culture, Sports and Tourism Ta Quang Dong, head of the contest’s directing board, noted that the Vietnam Art Photo Contest and Exhibition is a meeting point for the best photographers in the country.

However, the number of entries has shown photographers’ growth and capability to inspire the whole society through art. In addition, the event has also expressed their enthusiasm and contributions to society’s spiritual life.

“Works displayed here will bring the public a visual party, from realistic, beautiful and vivid images of Vietnamese people, culture, and landscapes to concepts and thinking of artists on issues of contemporary life,” he said.

The exhibition will run at the Vietnam Culture & Art Exhibition, No 2 Hoa Lu street, till October 16 before being moved to HCM City Fine Arts Museum, 97A Pho Duc Chinh street, from November 4 to 13./.

Art photos featuring contemporary life displayed have 523 words, post on en.vietnamplus.vn at October 7, 2022. This is cached page on Talk Vietnam. If you want remove this page, please contact us.