Never in their wildest dreams did IT engineers Chu Quang Khánh and Phạm Dương Nam ever imagine that they would be on the stage receiving an award for their work on national security. Khánh and Nam, who both work for Viettel High Technology Industries Corporation (VHT) in Hanoi, are among 49 young scientists awarded the Hồ Chí Minh Prize on September 19 for their projects on mid-range marine radar and military radio platform.


The two scientists were honoured for their dedication, diligence and persistence contributing to national independence, sovereignty, unity and territorial integrity.

At the age of 27, Nam, who works as a software engineer at Viettel's Radar Centre, never dreamed he would receive the Hồ Chí Minh Prize for Science and Technology.

"I feel so lucky. Lucky to be in a strong team, lucky to have the opportunity to work on solving problems and then lucky to receive this prestigious prize at the age of 27," Nam said.

Khánh, who is head of Viettel's Development Department of High-Performance Digital Hardware System, said his dream became reality after he received the prize.

"Honestly, I only wanted to learn more by working after graduating from university. But now, after ten years of working, my goal is to make products of international quality for both domestic and foreign markets,” Khánh said.

Owning ten patents, including two in the US and eight domestic, the two award-winning works contribute to affirming Vietnam’s position in the high-tech defence industry.

Neither Khánh nor Nam received any military training at the university. They accessed knowledge through document research, team sharing and in-depth internal training sessions.

"I still do software as my professional competence and expand my knowledge of radar systems by reading documents and discussing with colleagues," Nam said.

In addition, Nam said he had the chance to travel a lot to research the latest technologies.

He said: "At first, I thought a software engineer like me would just sit in the office and work on a computer all day. But I travel to many places, and go to military units. Every trip is a memorable experience."

Khánh said the first days he worked as a hardware designer at Viettel, there were only five people at the hardware design office, but the number has increased to 100 and the office has developed into an electronic warfare centre.

He said: "I have given all my energy to focus on designing many products that technically no one had done before. There was a period when I and my colleagues stayed at the office all night almost every two days for a month to design a circuit." 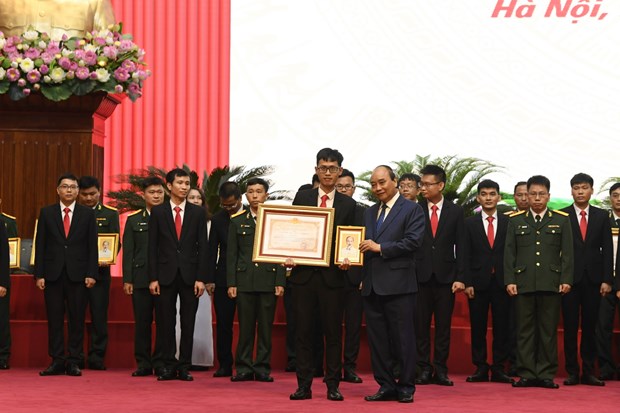 Phạm Dương Nam, software engineer at Viettel's Radar Centre, poses with President Nguyễn Xuân Phúc when he is awarded the Hồ Chí Minh Prize on May 19, 2022. — Photo courtesy of Viettel


In the journey to continue searching for people with the same passion, Khánh and Nam decided to return to their old school, the Hà Nội-based University of Technology, to find potential candidates.

Sharing the opportunity to participate in secret projects, Khánh said the most important thing is the spirit of learning and hard work.

"Try your best and consider work as a part of you, you will reap the rewards and be recognised," he added.

In charge of national security projects, both Khánh and Nam must keep their work strictly confidential.

At first, their families only knew that they worked for VHT until the projects have completed and they have been given the prestigious award.

Khánh said the day he went to receive the award for the Military Radio Platform project, his father watched the video attentively.

"’So you do these things’ – that's what he told me and I answered: ‘Yes’. I don’t know how to describe my dad at that time, but I know that he is very proud of me," Khánh said.

For Nam, he said his wife no longer complained when he was away from home.

"Previously, my wife could not imagine what I was doing and what field I was pursuing. She only knew briefly that her husband worked in military-related equipment. The day my mid-range marine radar project was awarded, my wife was very surprised," Nam said.

For the two young scientists, working on secret national projects bring them pride and satisfaction. The success of difficult projects with high security is the most valuable proof of the determination and solidarity among teammates.

“Dedicating to the country is my great honour. It's something bigger than myself,” Nam said.

Young scientists honoured for their work on national security have 1029 words, post on dtinews.vn at September 26, 2022. This is cached page on Talk Vietnam. If you want remove this page, please contact us.