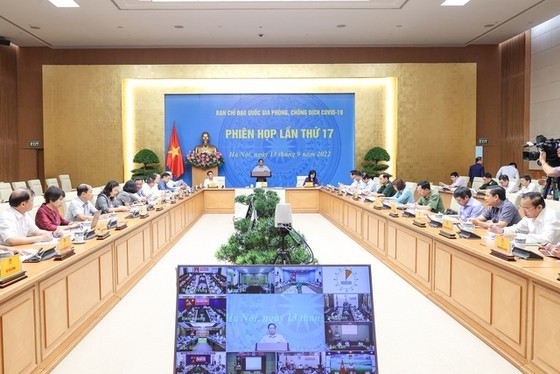 At the meeting
This morning, Prime Minister Pham Minh Chinh – Head of the National Steering Committee for Covid-19 Prevention and Control chaired the 17th meeting of the Steering Committee with the participation of local leaders in 63 provinces and cities.
Addressing the opening session, Prime Minister Pham Minh Chinh reiterated, On October 11, 2021, the Government issued Resolution 128 on 'safe adaptation, flexibility, and effective control of the Covid-19 epidemic'. After nearly one year of implementing the Resolution, many experts, scientists, and international organizations have assessed and confirmed the correct policy of the Party, and the Resolution 128 plays a decisive role in the results of the epidemic prevention, recovery, and socio-economic development over the past time.
Until now, the country has maintained macroeconomic stability, controlled inflation, restored the economy and promoted growth, and ensured major balances (revenue – expenditure, export-import, food, energy, labor supply and demand; therefore, people’s living standards improved, according to the preliminary survey, the percentage of households with income remained unchanged and increased to 82.2 percent. Vietnam has successfully implemented the vaccine strategy as well as identified pillars and formulas for epidemic prevention. 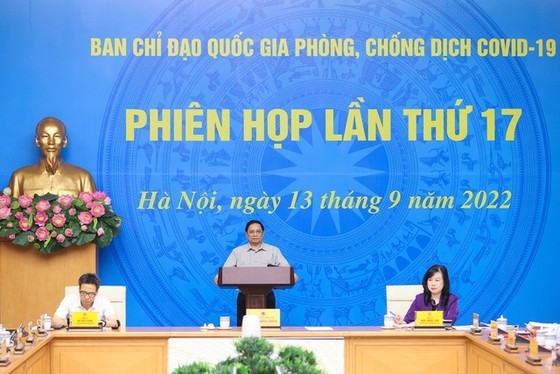 However, the Prime Minister said that the situation was still complicated whereas many people practice neglected behaviors.

The Prime Minister suggested that delegates focus on discussing the situation and tasks and solutions to further accelerate the vaccination program, which has not yet reached the set target. Moreover, solutions should be adopted to overcome the shortage of drugs, medical equipment, and supplies. Information on the pandemic should be increased to further raise people’s awareness of epidemic prevention…
According to the Ministry of Health’s report, the world recorded over 613 million cases and over 6.5 million deaths due to Covid-19 by September 11, 2022. The Omicron variant is dominating over other variants, in which minor variants such as BA.4, and BA.5 have been recorded; plus, the second generation sub-lineage variants of the Omicron variant such as BA.2.74, BA.2.75, BA.2.76, sub-variants are likely to spread faster than the parent variant and can increase the number of cases again.
Vietnam has recorded over 11.4 million cases, 10.3 million recoveries accounting for 90.2 percent, and over 43,000 deaths accounting for 0.38 percent.
In the past seven days, the country recorded an average of about 2,900 new cases per day, especially 3,878 cases recorded on September 7, the highest in nearly 4 months. Worse, the number of cases is on the rise again.
The Government, the Prime Minister, and the National Steering Committee for the prevention and control of the Covid-19 epidemic continuously gave instructions to strengthen the drastic implementation of the prevention and control of the Covid-19 epidemic.
Agencies and local administration were required not to relax their vigilance and require the effective implementation of epidemic prevention and control measures with the goal of controlling the epidemic and preventing a re-emergence. Especially, relevant agencies should focus on acceleration of the Covid-19 vaccination roll-out while keeping enough drugs, medical supplies, equipment, and medical personnel for epidemic prevention and control and continue to effectively implement Resolution 38/NQ-CP of the Government.

Vietnam sees increase in Covid-19 cases in August have 542 words, post on www.sggpnews.org.vn at September 13, 2022. This is cached page on Talk Vietnam. If you want remove this page, please contact us.