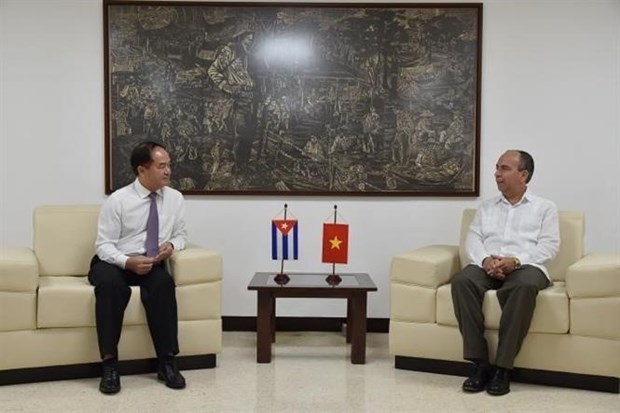 Havana (VNA) – Vietnam wishes to learn from Cuba 's experience in managing relations with the Catholic Church and the Vatican and expanding bilateral cooperation and information exchange in religious affairs, Deputy Minister of Home Affairs and Chairman of the Government Committee for Religious Affairs Vu Chien Thang has said.

He made the statement when meeting Caridad Diego Bello, head of the Cuban Communist Party (CCP)'s Office of Religious Affairs , as he was visiting the country on September 17 – 22.

Religions live in harmony in Vietnam, with followers actively contributing to national construction and development, Thang told Bello. The Vietnamese Party and State have pursued consistent policies of ensuring religious freedom and equality, promoting cultural and ethical values of all religions and making use of resources created by religious dignitaries and followers to develop the country, he said.

The official urged the two sides to further ramp up high-level delegation exchange and asked the CCP office to provide an enabling environment for the Vietnamese community in Cuba to practice their traditional beliefs and religions.

He also had a meeting with Head of the CCP Cadre Policy Department Humberto Camilo Hernández Suárez, during which several highlights of the cooperation between the Vietnamese Ministry of Home Affairs and the Cuban department were outlined. The two sides inked a number of agreements in archive and records management , and personnel training.

Thang later paid a courtesy call to Rogelio Polanco Fuentes, Secretary of the CCP Central Committee and head of its Ideological Department where the two officials discussed partnership in personnel arrangement and training, and public administrative reforms between the two countries. They also talked about religious situation and policies as well as experience in religious state governance./.

Vietnam seeks Cuban experience in religious affairs have 438 words, post on en.vietnamplus.vn at September 23, 2022. This is cached page on Talk Vietnam. If you want remove this page, please contact us.