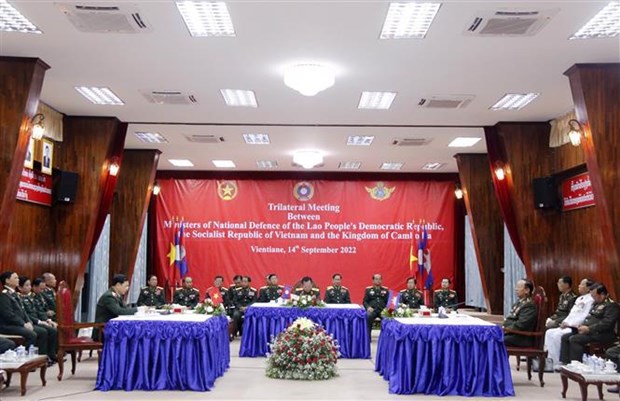 The meeting among the defence ministers of Vietnam, Laos, and Cambodia in Vientiane on September 14. (Photo: VNA)

Vientiane (VNA) – Minister of National Defence Gen. Phan Van Giang attended the annual meeting among the defence ministers of Vietnam, Laos, and Cambodia in Vientiane on September 14 to strengthen the countries' defence ties.

Minister Giang and his counterparts Chansamone Chanyalath from Laos and Tea Banh from Cambodia discussed the regional and international issues of common concern; cooperation orientations for the time ahead, including increasing all-level mutual visits, holding joint search and rescue exercises, and coordinating to combat transnational crimes; and sharing information about hostile forces sabotaging their countries.

He also called for more attention to educating the three countries' militaries and people, especially the young, on the significance of the Vietnam – Laos – Cambodia solidarity; and for further mutual support at international and regional forums, especially mechanisms in ASEAN such as the ASEAN Defence Ministers' Meeting (ADMM) and the ADMM Plus, thus promoting the stature and role of each nation.

On this occasion, Minister Giang invited his Lao and Cambodian counterparts to attend an international defence exhibition to be held by the Vietnamese Ministry of National Defence in Hanoi this December.

Earlier the same day, the high-ranking military delegation of Vietnam took part in a ceremony marking the Laos – Vietnam, Vietnam – Laos Solidarity and Friendship Year 2022 held by the Lao Ministry of National Defence.

Lao Defence Minister Chansamone Chanyalath reviewed the glorious history of the two countries' relations, founded by late Presidents Ho Chi Minh, Kaysone Phomvihane, and Souphanouvong. He also expressed his deep gratitude to the Vietnamese and Lao officials, Party members, soldiers, and people who fell down for the sake of the two countries' revolutions.

In his remarks, Giang thanked the Lao Party, people, and army for providing conditions for the search for and repatriation of Vietnam's volunteer soldiers and experts.

He affirmed that the Defence Ministry of Vietnam will always stand side by side with its Lao counterpart during the national development and defence in each country./.

Vietnam, Laos, Cambodia strengthen defence cooperation have 561 words, post on en.vietnamplus.vn at September 14, 2022. This is cached page on Talk Vietnam. If you want remove this page, please contact us.