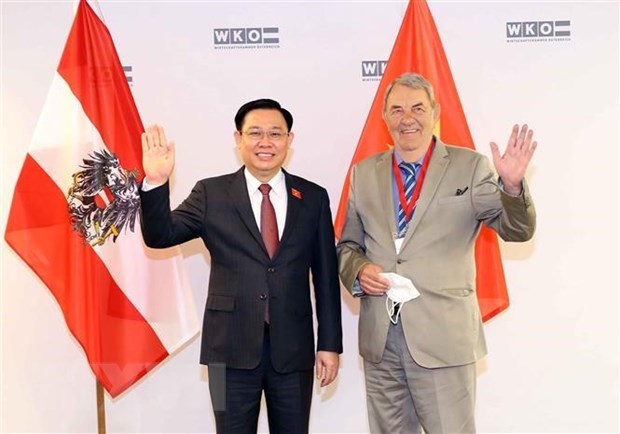 Hanoi (VNA) – Austria was one of the first western countries to set up diplomatic ties with Vietnam. Fifty years have passed since the establishment of the relationship, the two countries have enjoyed great strides in bilateral cooperation.

According to Vietnamese Ambassador to Austria Nguyen Trung Kien, since the diplomatic relations were set up on December 1, 1972, the two countries' relations have recorded progress in all aspects, from politics to economy, trade, and investment.

Mutual visits and meetings between leaders of Vietnam and Austria have been maintained.

Most recently, Chairman of the National Assembly Vuong Dinh Hue visited the European nation in September 2021 to attend the fifth World Conference of Speakers of Parliament (WCSP5) at the invitation of President of the Inter-Parliamentary Union (IPU) Duarte Pacheco and President of the Austrian National Council Wolfgang Sobotka. Prime Minister Pham Minh Chinh held phone talks with his Austrian counterpart Sebastian Kurz on September 16 last year. In October 2018, then PM Nguyen Xuan Phuc paid an official visit to Austria.

Kien noted that Austria is currently among the top 10 EU trading partners of Vietnam. Bilateral trade stood at around 3.6 billion USD in 2019, before the COVID-19 pandemic broke out. Despite a slight decline due to the pandemic's impacts, trade has bounced back considerably since August 2020, when the EU – Vietnam Free Trade Agreement (EVFTA) took effect, and approximated 3.5 billion USD in 2021.

As of August 2021, Austria ranked 50th among 141 countries and territories investing in Vietnam, with 37 valid projects worth over 147.5 million USD, according to the Ministry of Planning and Investment’s statistics.

The ambassador noted aside from politics and economy, bilateral relations have also been expanded to other spheres, including education – training, science – technology, and culture, with a number of activities held.

There are about 5,000 – 5,500 Vietnamese people in Austria at present. To many of them, Austria has become their second home. The Vietnamese community there has been contributing to the two countries' friendship and close-knit ties, according to the diplomat.

Joint efforts to be made to enhance partnership

In the phone talks with Austrian Minister for European and International Affairs Alexander Schallenberg on June 1 this year, Minister of Foreign Affairs Bui Thanh Son affirmed that Vietnam attaches importance to the enhancement of traditional friendship and multifaceted cooperation with the EU country.

To develop bilateral ties more dynamically, practically, and effectively in the time ahead, they agreed to maintain the exchange of all-level delegations and meetings, coordinate to organise activities marking the 50th anniversary of diplomatic ties, increase trade and investment promotion activities, expand partnerships to the fields matching Austria's strength and Vietnam's demand like renewable energy, climate change response, waste treatment, and processing industry.

The two sides agreed to work closely to successfully hold the coming session of the joint committee for economic and trade cooperation, and capitalise on opportunities and advantages generated by the EVFTA .

The ministers also affirmed the continuation of close coordination and mutual support at multilateral forums and organisations like the United Nations, the Asia-Europe Meeting (ASEM), and the ASEAN – EU cooperation framework.

Some events have been taking place to celebrate the 50th founding anniversary of Vietnam – Austrian relations.

Among them, an Austria – Vietnam workshop on future mobility was held last June by the Austrian Embassy, the Vietnamese Ministry of Transport, and the Hanoi University of Science and Technology.

In July, an exhibition on famous Austrian composers took place at the National Library of Vietnam. Meanwhile, the Austrian Embassy in cooperation with the Vietnam National Academy of Music and Ho Chi Minh City Conservatory of Music will organise concerts of the AUREUM Saxophon Quartet in Hanoi on September 28 and HCM City on October 1.

On September 28 – 29, the Vietnam Day in Austria will be organised in Vienna. This programme will also be attended by Minister of Foreign Affairs Bui Thanh Son during his official visit to Austria.

Within the framework of the event, the minister will cut the ribbon to officially open the Vietnam Cultural Space, co-chair a ceremony of the 50th anniversary of diplomatic relations, and deliver opening remarks at the Vietnam – Austria Business Forum./.

Vietnam - Austria relations see unceasing development have 881 words, post on en.vietnamplus.vn at September 28, 2022. This is cached page on Talk Vietnam. If you want remove this page, please contact us.