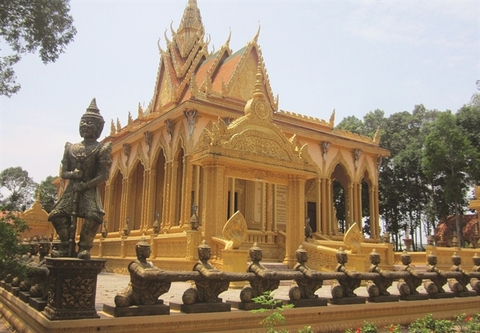 The value of retail trade and services in the Cuu Long (Mekong) Delta province of Tra Vinh topped VND30.6 trillion (US$ 1.34 billion) in the first eight months, a nearly 30 per cent increase year-on-year, according to its Department of Industry and Trade.

Ho and Chim, riverine islands in Cang Long and Chau Thanh districts have, for instance, attracted a large number of tourists.

With the assistance of local authorities and the HCM City Institute for Tourism and Economic Development Research, Ho is offering tourism activities such as night tours without using electricity.

Visitors can try their hand working as a farmer during the day and have dinner with local people under the light of oil lamps at night and sightsee by walking on mud paths with lanterns.

The 22ha island is surrounded by the Co Chien River and has a total area of 24 households with 49 people.

It is considered to have enormous untapped tourism potential with its vast fruit orchards and friendly people.

On Chim, many households have started to offer tourism services after getting support from authorities.

Tourists visiting the island can try their hand at playing traditional games and cooking local foods, ride around on bicycles, walk in fruit orchards, row boats, and catch crab, shrimp and fish.

Realizing that the province has not tapped its tourism potential, local authorities have outlined an ambitious plan to develop tourism into a spearhead economic sector. It hopes to attract 2.5 million visitors a year by 2025, including 85,000 foreigners.

According to Sum, many preferential policies have been adopted to attract investment in tourism technical and promotion campaigns have been stepped up both within the country and outside.

A top priority is to build the Ba Om Pond tourism complex into a national tourism site, he said.

Cau Ke and Tra Cu districts and Duyen Hai Town will be built into hubs for orchard, beach and festival and spiritual tourism.

Situated 130km from HCM City and 80km Can Tho City, Tra Vinh has a coastline of 65km and is located downstream of the Mekong River and between the Tien and Hau rivers, two of its tributaries.

It has diverse natural tourism resources and cultures like riverine islands with friendly people, fruit orchards offering year-round harvests and a large number of ethnic Hoa and Khmer peoples.

Tra Vinh Province sees 30 per cent rise in retail trade and services have 717 words, post on bizhub.vn at September 14, 2022. This is cached page on Talk Vietnam. If you want remove this page, please contact us.