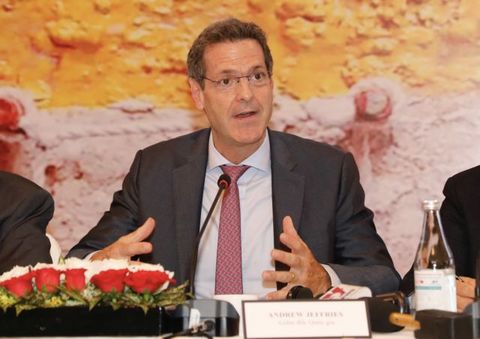 The State Bank of Viet Nam revised up several interest rates by 1 per cent, starting from September 23. ADB Country Director Andrew Jeffries spoke to Vietnam News Agency on this move in the context of the US’ Fed, ECB and a number of other central banks raising their rates to curb inflation.

ADB has kept Viet Nam's GDP forecast unchanged at 6.5 per cent and 6.7 per cent in 2022 and 2023, respectively – a relatively positive statement given the complex situation in the domestic and international markets. Could you justify ADB's forecast?

The Government's measures have been extremely effective. First and foremost, the handling of pandemic, particularly the aggressive vaccination campaign last year, has enabled a more flexible approach in return to economic normals.

Another significant achievement in economic policy is Viet Nam has been maintaining macro economic stability through the pandemic and also through the economic shocks of this year. Viet Nam was successful in controlling inflation this year, despite enormous pressure from energy, and commodity price surges from the world economy.

And monetary policies and measures implemented so far by the Government have greatly contributed to this success, keeping money supply and credit under control, dealing with pressure for a stable exchange rate, while supporting business access to financial resources for recovery. So this is a very delicate balancing act and the SBV should be given credit for this.

Rate hikes by the US Federal Reserve (Fed) and the European Central Bank (ECB) have triggered divestment waves out of emerging markets. How do you evaluate the situation in Viet Nam?

Viet Nam is relatively less affected than many other countries in Asia. First of all, Viet Nam does not have significant government debt in the international bond markets and has relatively low public debt level at 43 per cent of GDP. Capital control restricts overseas portfolio investment or hot money from rapid inflows and outflows from Viet Nam's stock market.

The US Fed's aggressive monetary tightening will trigger short term capital outflows, however what's important to consider for Viet Nam is that foreign direct investment, or FDI, remains healthy in Viet Nam due to its solid medium-term economic fundamentals. It's very important to consider that FDI is long term, it doesn't come and go and flee based on economic shocks. And Viet Nam has strong economic fundamentals and will remain an attractive FDI destination.

The SBV's one percentage point increase in rate is an example of decisive measures that are necessary in this environment where the Fed, ECB and a number of countries have very recently raised rates, with Viet Nam following suit to keep the dong stable. It was difficult but the right thing to do.

Fed's rate hikes have driven the USD to appreciate against other currencies, including Vietnamese dong while Viet Nam's economy is quite dependent on material imports. In your opinion, how will this affect the production stability and inflation in Viet Nam?

Throughout Asia, monetary policy tightening has accelerated as central banks in the region have hiked rates to curb inflation and safeguard financial stability and as a reaction to aggressive rate hikes of the Fed, ECB and others. With continued price pressure and since real interest rates remain relatively low in many economies, monetary authorities in the region may have to consider even more tightening to keep inflation in check and to prevent possible capital outflows.

For Viet Nam, a stable Vietnamese dong is critical to support trade and also contain inflation. Appreciation of US dollar has been detrimentral for inflation control effects as it would make imported goods more expensive and would worsen the current account balance and eventually the balance of payments.

Viet Nam also imports a lot of intermediate goods and does final reassembly for re-export. So a stable Vietnamese dong is also important to maintain relatively lower prices for these important imports that are critical inputs for Viet Nam's further export.

What just happened recently with raising interest rates in Viet Nam is a reaction to all these market conditions that are going against maintaining a stable exchange rate with the US dollar is quite important. It does put pressure on Viet Nam's foreign reserves, especially when the trade surplus and remittance which supply foreign reserves may be reduced in the future if there's a global recession or downturn in major economies like the US, EU and other trading partners of Viet Nam.

I guess with all of this in context, the upward revision of rates in Viet Nam has been a preemptive measure to contain inflation. This will raise financing costs for the economy which is still in the recovery stage, which is a challenging and awkward position for the Government to have to make decisions. So the challenge is how to maintain an accommodative fiscal policy to support growth, while implementing a tightening monetary policy to contain inflation and stabilise the exchange rate.

Besides positive factors, Viet Nam's economy will face certain risks when the global economic downturn might affect exports more heavily than forecast. Could you make some recommendations to mitigate these risks?

High inflation in major economies and the tightening monetary policy around the world is weakening global demand. Viet Nam is an open economy, which means this trend could weigh on Viet Nam's exports.

Another issue is possible labour shortages which could impede the recovery of services in the labour intensive export sector. So recommendations include Viet Nam continue to maintain a flexible monetary policy and closely monitor the global economic situation. SBV's aggressive rate hike is a decisive action in a reaction to the extremely volatile global situation to defend the dong and keep inflation in check.

Targeted fiscal support for the most vulnerable groups may be needed if inflation does rise. Before the SBV's rate hike, they were using credit room limits to address the problem which is imposing a ceilling on credit quantity to financial institutions. This worked, but it's time to move on to more market based instruments such as increasing rates to promote a healthy financial sector development for longer terms.

So on the fiscal side, Viet Nam's economic recovery development programme has a lot of interesting and innovative features to help companies and businesses recover from the pandemic and the current shocks. So implementation needs to be sped up and again target those in need rather than being too broad to limit leakages and abuses.

And more thinking in the longer-term, priority should focus on improving the overall business environment which has come a long way but that's a gradual and continuous process that needs to keep going. — VNS

State Bank rate hike necessary to defend VN dong, control inflation have 1385 words, post on bizhub.vn at September 29, 2022. This is cached page on Talk Vietnam. If you want remove this page, please contact us.