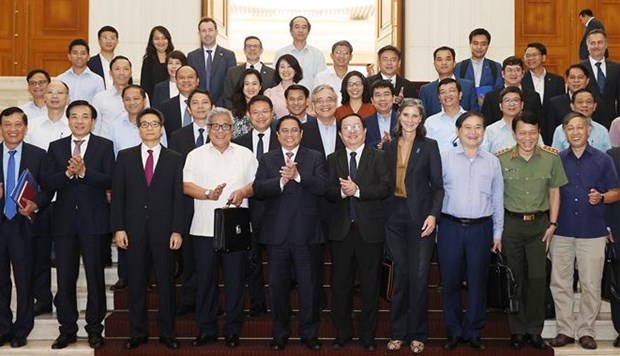 Concluding a conference on developing the science and technology market held both online and in-person in Hanoi on September 23, PM Chinh said over the past  years, the Vietnamese Party and State have issued a number of policies and laws to develop the sci-tech sector.

He asked ministries, agencies and localities to remove barriers regarding mechanisms and policies to provide a synchronous, effective and modern sci-tech market as stipulated at the 13th National Party Congress, as well as incorporate sci-tech market development into the annual and five-year socio-economic development plans.

At the same time, two major goals and seven groups of measures set at the national sci-tech market development programme till 2030 must be fulfilled, he said.

The PM requested building and piloting a policy to commercialise intellectual property using the State budget or under the PPP model, and encourage firms to import core technologies and master their uses via consultations with research institutes and universities.

It is a must to step up the development of the sci-tech ecosystem and sci-tech market ecosystem at all levels in a synchronous and comprehensive manner, he said.

On the occasion, the government leader asked other countries and international organisations to continue working closely with Vietnam in this regard.

He also expressed hope that Vietnamese scientists abroad will engage more effectively in the transfer of modern and green technologies to individuals and organisations at home, thus making active contributions to the country's industrialisation and modernisation process.

PM Chinh believed that under the Party and State's directions, and with the determination of ministries, agencies, localites and support of businesses and citizens at home and abroad, Vietnam's sci-tech market will continue to contribute to the cause of national construction and development.

Sci-tech development and application a priority policy: PM have 489 words, post on en.vietnamplus.vn at September 23, 2022. This is cached page on Talk Vietnam. If you want remove this page, please contact us.