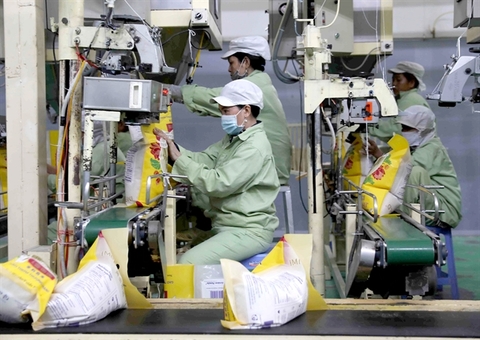 Rice is packed at Loc Troi Group’s plant in An Giang Province. Recent extreme weather in Asia’s top rice exporting countries, which account for about 90 per cent of world rice production, is likely to reduce yields and output this year. — VNA/VNS Photo Pham Hau

Rice companies are benefiting from rising rice prices, especially the group of companies with a large export weight of rice.

The price of rice is increasing because India restricted rice exports. India exports rice to more than 150 countries and contributes about 36.7 per cent of the global rice trade, so any drop in export volume will put pressure on rice prices.

The global rice supply still faces risks due to severe weather conditions in major exporting countries, as stated in the new report of VNDirect Securities (VND).

Recent extreme weather in Asia’s top rice exporting countries, which account for about 90 per cent of world rice production, is likely to reduce yields and output this year, VND said.

China alone, the world’s largest rice consumer, has suffered severe drought in seven provinces, causing the country’s rice production to be reduced and is expected to increase rice imports to a record level of 6 million tonnes in crop year of 2022/2023.

According to the US Department of Agriculture, global inventories have fallen to a 4-year low when inventory-to-consumption ratio stays at just 34.4 per cent, compared to the average of 36.6 per cent for the 2018-2022 period.

VND said that rice prices may increase in the near future.

Viet Nam is the world’s third largest rice exporter, after India and Thailand, with 7.8 per cent of global trade; and is the largest exporter to China with 24.5 per cent market share. Indian rice prices are in a weaker competitive position due to higher tariffs, which in turn pushes buyers to shift to Thai and Vietnamese rice.

The Prime Minister has directed the Ministry of Agriculture and Rural Development to develop a project on sustainable production of 1 million hectares of high-quality specialised rice, reducing greenhouse gas emissions in the Mekong Delta region.

Accordingly, in order to improve the quality of exported rice to meet international standards, the Market-oriented Smallholder Value Chains Project (MSVC) project was born, under the public-private partnership between Olam Agri company, the Deutsche Gesellschaft für Internationale Zusammenarbeit (GIZ) and the Ministry of Agriculture and Rural Development.

LTG will directly benefit from rice exports thanks to being one of the rice distributors to both major markets – Europe and China. With the development orientation focusing on the food segment, the revenue proportion of the rice segment reached 39 per cent in 2021 and 57 per cent in the first 6 months of 2022.

As for TAR, the company expects to benefit from China’s production reduction and India’s export restriction due to drought. Rice trading is TAR’s main business, with exports accounting for nearly 15 per cent of total revenue.

China is the main rice export market of this enterprise with a proportion of up to 27 per cent of export revenue. Therefore, China increasing rice imports from Viet Nam will be the driving force for TAR to increase export output.

PAN will also benefit directly from Europe’s reduced production and India’s export restrictions due to drought. The agricultural segment has now become one of PAN’s key industries as it contributes 19 per cent to total revenue and 39 per cent to total gross profit. — VNS

Rice companies benefit from rising prices have 776 words, post on bizhub.vn at September 28, 2022. This is cached page on Talk Vietnam. If you want remove this page, please contact us.