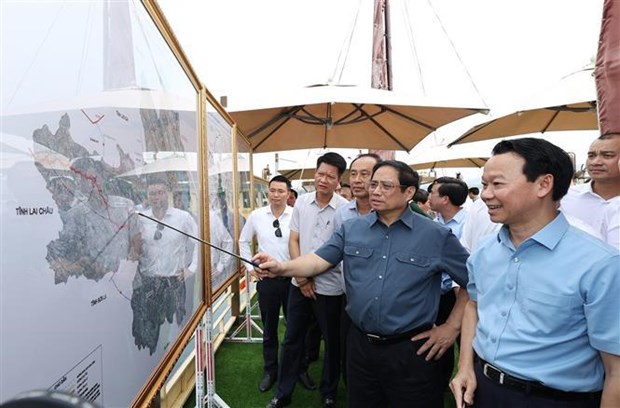 The projects included one on building Thac Ba lake national tourism site by 2040. The site is expected to attract about 1 million tourists by 2030 and some 2.5 million by 2040.

Commenting on its planning, PM Chinh asked Yen Bai province to work with relevant agencies and localities to capitalise on the connection between the lake and Phu Tho-Tuyen Quang, Tuyen Quang-Ha Giang, and Noi Bai-Lao Cai expressways.

The building of a road around the lake will help fully tap all of its space, the government leader said.

He then went on a field trip to inspect a 4.25km embankment to prevent the Red River's flooding in the area of Gioi Phien commune in Yen Bai city, and visited the under-construction Gioi Phien bridge, the fifth of its kind linking the centre of Yen Bai city on the left bank of the Red River to its right bank. He demanded the building progress of the bridge be shortened by at least six months.

Other sites inspected by the Government leader included an infrastructure project in Gioi Phien and Bao Hung communes and the construction site of the Tran Yen industrial park in Yen Bai city./.

Prime Minister inspects socio-economic infrastructure projects in Yen Bai have 428 words, post on en.vietnamplus.vn at September 24, 2022. This is cached page on Talk Vietnam. If you want remove this page, please contact us.