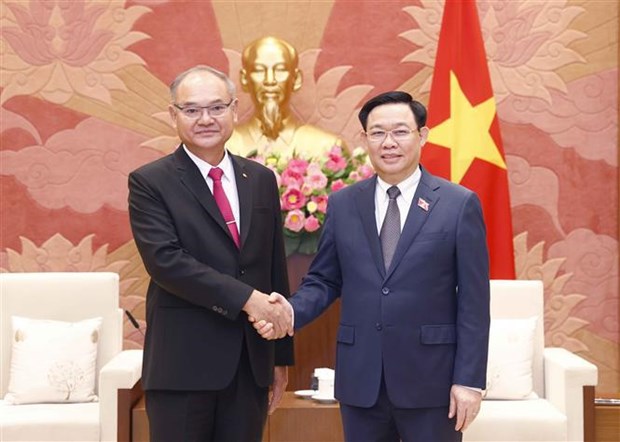 Hanoi (VNA) – Na tional Assembly (NA) Chairman Vuong Dinh Hue hosted a reception for visiting First Vice President of the Thai Senate General Singsuk Singpai and a delegation of the Senate Standing Committee on the Independent Organs under the Constitution of Thailand in Hanoi on September 28.

He expressed his joy at the increasingly growing friendship and cooperation between Vietnam and Thailand, especially in economy, trade and investment. Thailand is now the largest trade partner and the second biggest investor of Vietnam in ASEAN.

Hue said he had successful online talks with the Speaker of the House of Representatives of Thailand Chuan Leekpai in August 2021, thereby shaping the framework for the two countries’ legislatures to continue strengthening cooperation in the future.

Singpai said Thailand’s media has reported about Vietnam’s achievements, including those in corruption fight. He also expressed his impression at Vietnam's GDP and export growth  as well as the country's success in attracting foreign direct investment (FDI).

He hoped that both Vietnam and Thailand will achieve their development goals in the future and the bilateral relations will develop more and more sustainably.

On behalf of the Thai Senate, Singpai invited NA Chairman Hue to attend the 30th Asia-Pacific Parliamentary Forum (APPF-30) in Thailand next month.

Members of the delegation of the Senate Standing Committee on the Independent Organs under the Constitution of Thailand highly valued the effectiveness of Vietnam’s corruption combat, expressing the desire to learn about the country’s policies and share experience in this field with relevant Vietnamese agencies.

Regarding the prevention and fight against corruption and negative phenomena, the top Vietnamese legislator asserted that the Party and State of Vietnam regard this as a key task.

The Vietnamese NA issued the Anti-corruption Law to create a legal framework for this work, he said, noting that all decisions made by the legislature focus on preventing and combating corruption and negative phenomena, along with promoting thrift practice and wastefulness prevention.

The Vietnamese NA is also working hard to improve the quality of law-making, supervision and deciding on important national issues in order to contribute effectively to the fight against corruption and thrift practice promotion, He said./.

NA Chairman receives First Vice President of Thai Senate have 704 words, post on en.vietnamplus.vn at September 28, 2022. This is cached page on Talk Vietnam. If you want remove this page, please contact us.