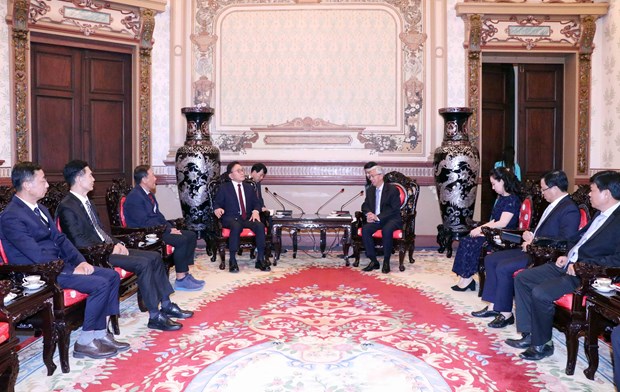 At the reception (Photo: VNA)

HCM City (VNA) – Ho Chi Minh City wishes to enhance cooperation with localities and partners from the Republic of Korea (RoK) to contribute to advancing the Vietnam-RoK strategic cooperative partnership to a new level, a municipal official said on September 26.

At a reception for visiting Park Soo Kwan , Vietnam's Honorary Consul General in Busan, Vice Chairman of the HCM City People's Committee Vo Van Hoan highlighted cooperation between the Vietnamese southern economic hub and Korean localities over the past years, especially in trade, tourism and investment.

HCM City is accommodating about 80,000 Koreans and some 2,000 Korean firms, Hoan said, considering them a bridge of culture between the two sides.

The official suggested Park continue his efforts to promote collaboration between HCM City and Busan in the time ahead, affirming that local leaders are willing to welcome Korean enterprises who come to explore investment opportunities in the city.

He also proposed the Honorary Consul General call on more Korean firms and partners to invest in HCM City and help the city organise a friendship dialogue with localities worldwide, to take place later this year.

For his part, Park said Busan's investors are interested in production, technology, green transport and renewable energy in HCM City.

He also asked local leaders continue their support to Korean enterprises, including those from Busan, and the Koreans living and working in the city./.

HCM City seeks stronger cooperation with Korean localities, partners have 378 words, post on en.vietnamplus.vn at September 26, 2022. This is cached page on Talk Vietnam. If you want remove this page, please contact us.