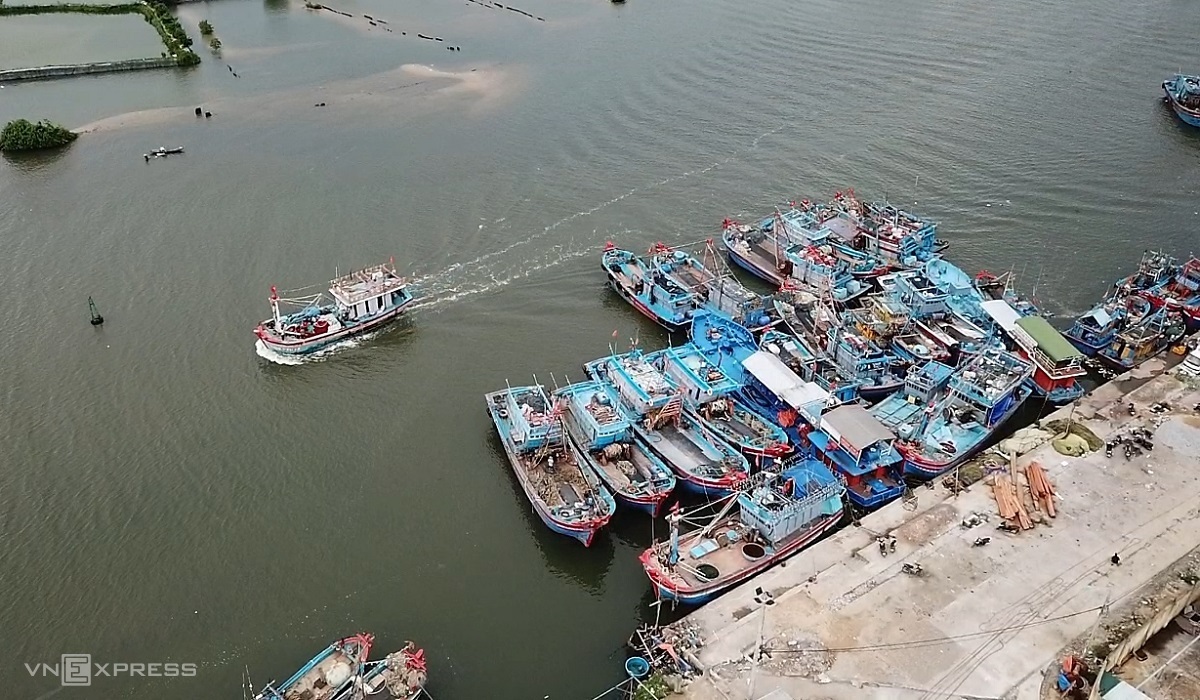 On Sunday afternoon, dozens of fishing boats rushed to the Tinh Ky Port in Quang Ngai Province to avoid getting stuck in Storm Noru’s way.

Many of them had planned to be out at sea for 20-30 days but had to return to shore after just one week.

Storm Noru, on its way to the Philippines, is set to make landfall Wednesday in the central localities Thua Thien Hue, Da Nang, Quang Nam and Quang Ngai with wind speeds of 140 kph.

The eyewall of the storm was making landfall in the Polillo Islands of the Philippines at 4 p.m. Sunday, according to the Philippine Atmospheric, Geophysical and Astronomical Services Administration (PAGASA).

At a Sunday meeting chaired by Deputy Prime Minister Le Van Thanh, central provinces from Quang Binh to Binh Thuan said they were ready to evacuate over 860,000 residents to safe areas. 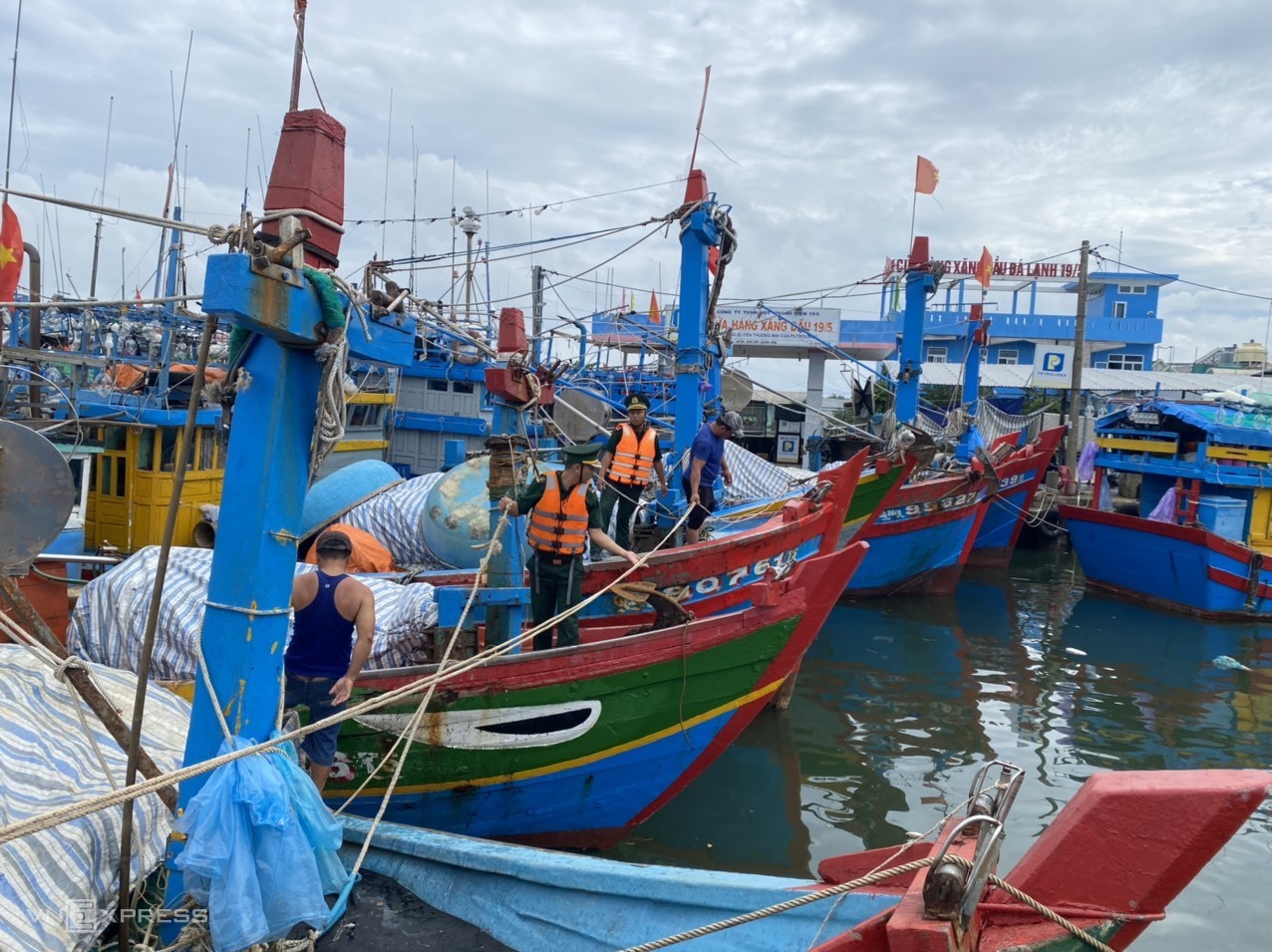 According to official statistics, Quang Ngai has more than 5,600 fishing boats with nearly 35,000 fishermen.

Lieutenant Colonel Lam Van Vien, head of the border guard station at Sa Ky Port, said his unit has contacted all ships and informed them of the direction of the storm so that they can seek shelter at the earliest. 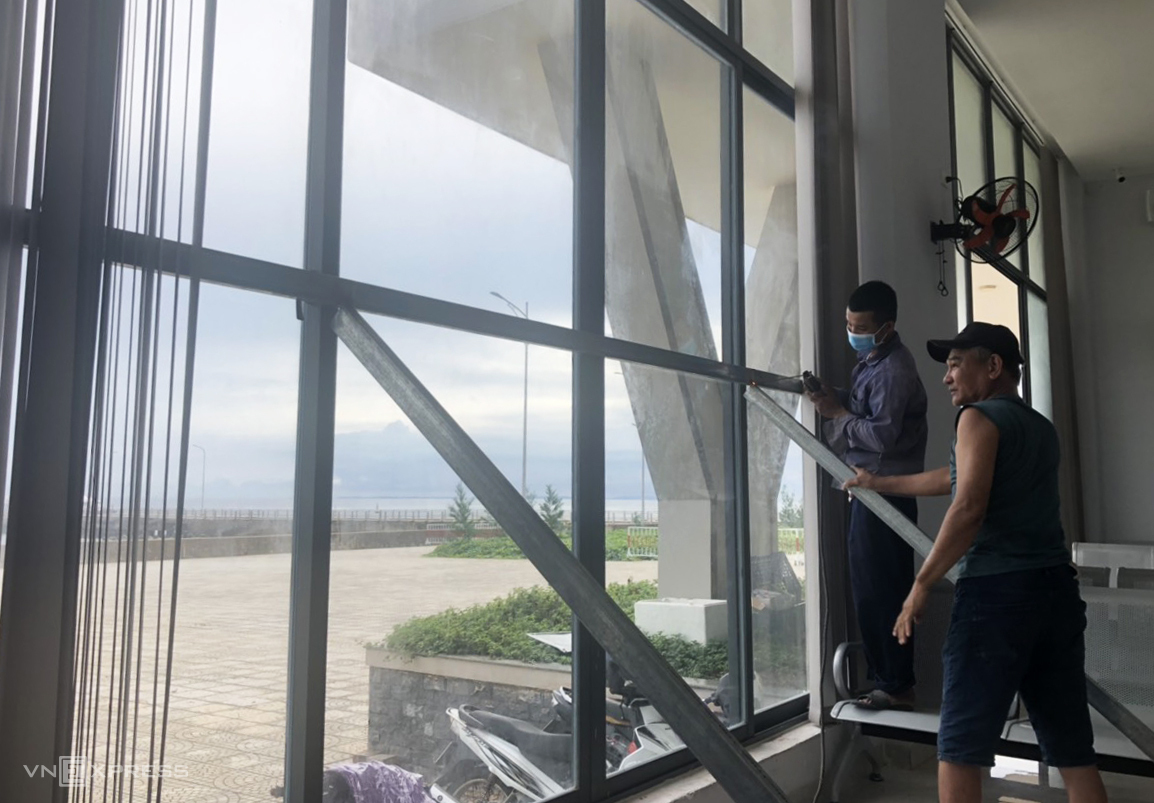 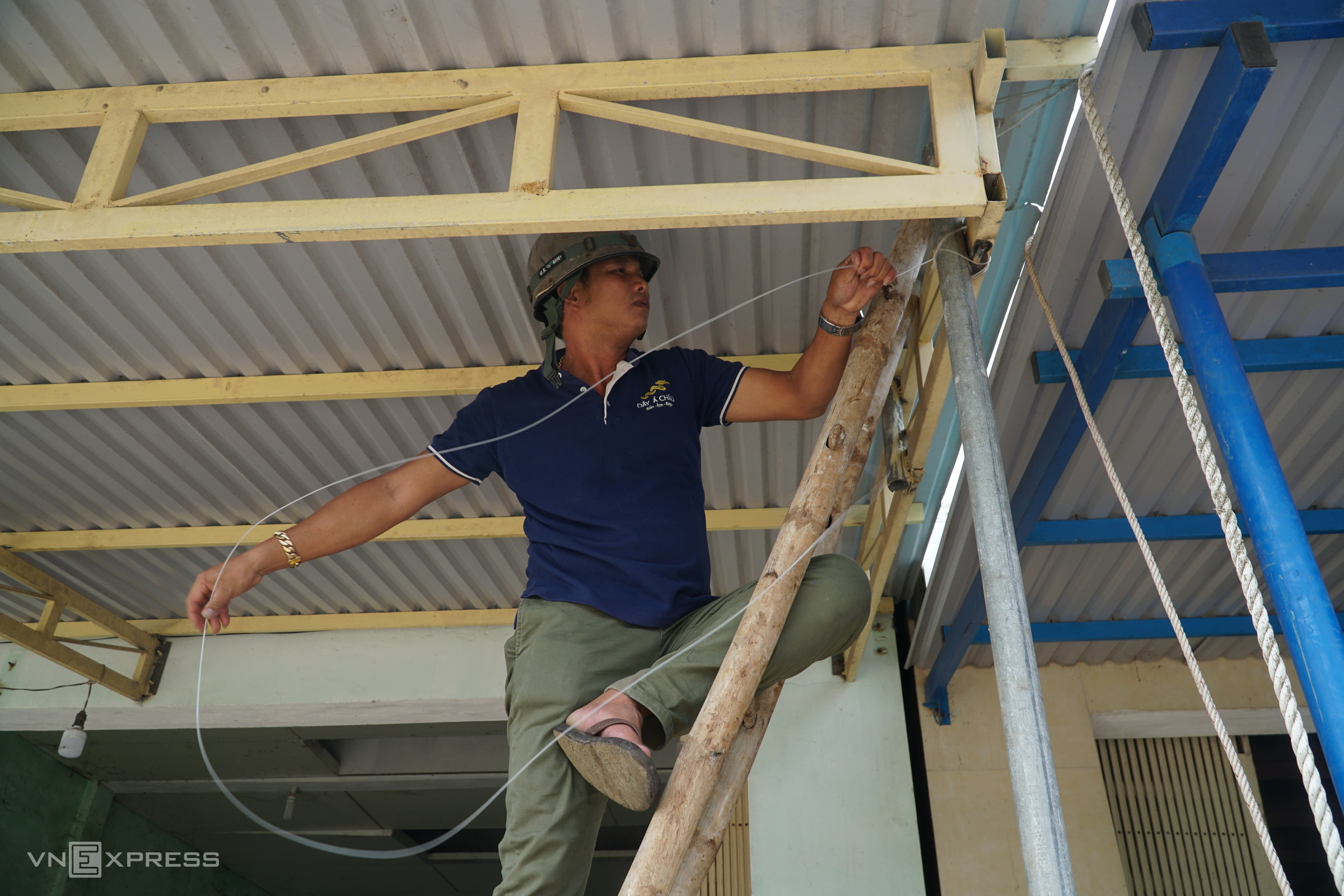 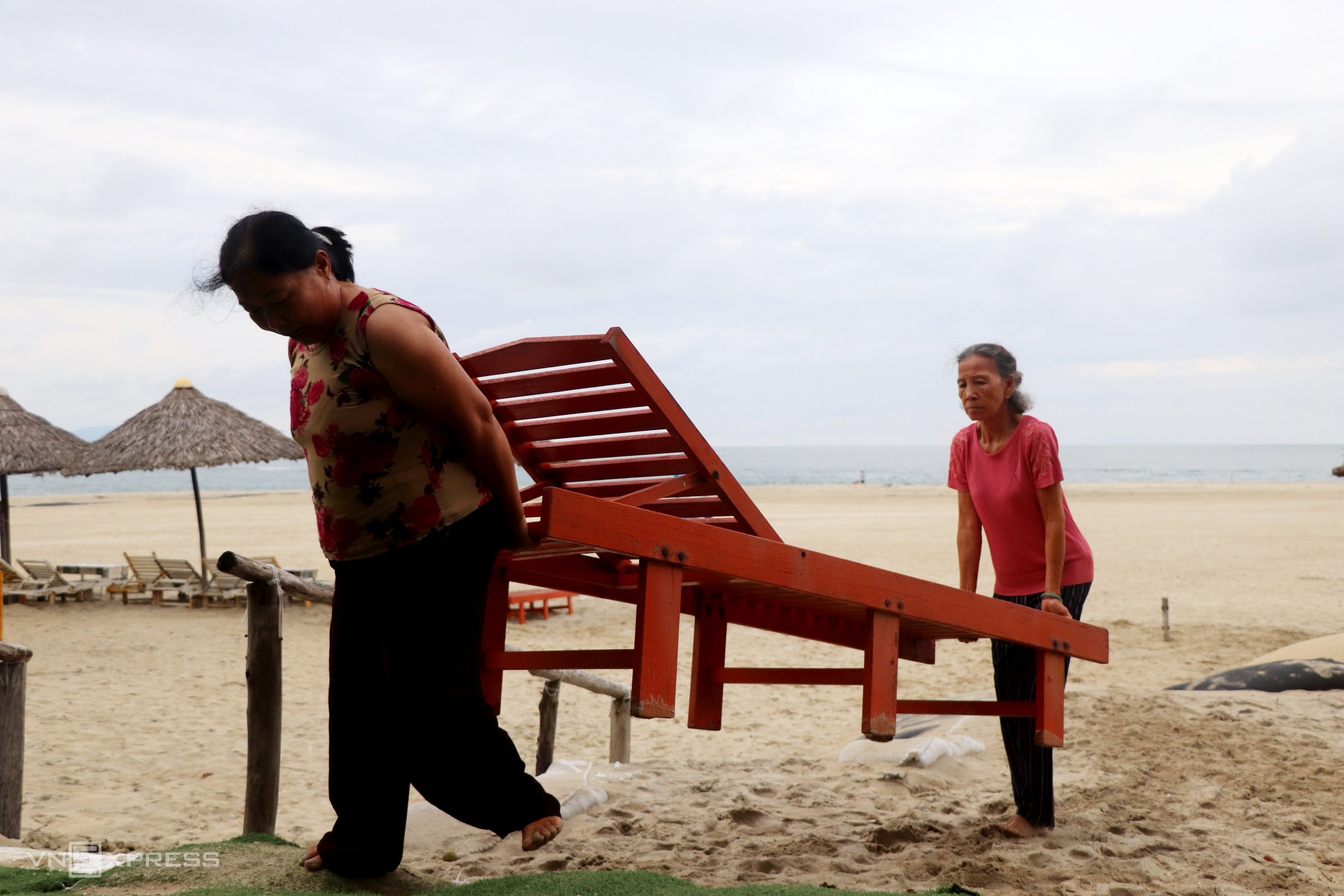 On September 25, the weather in Quang Nam was sunny, but people along the coast of Cua Dai beach, a popular tourist attraction, collect their belongings, piled sandbags on their roofs and used ropes to tie them down. 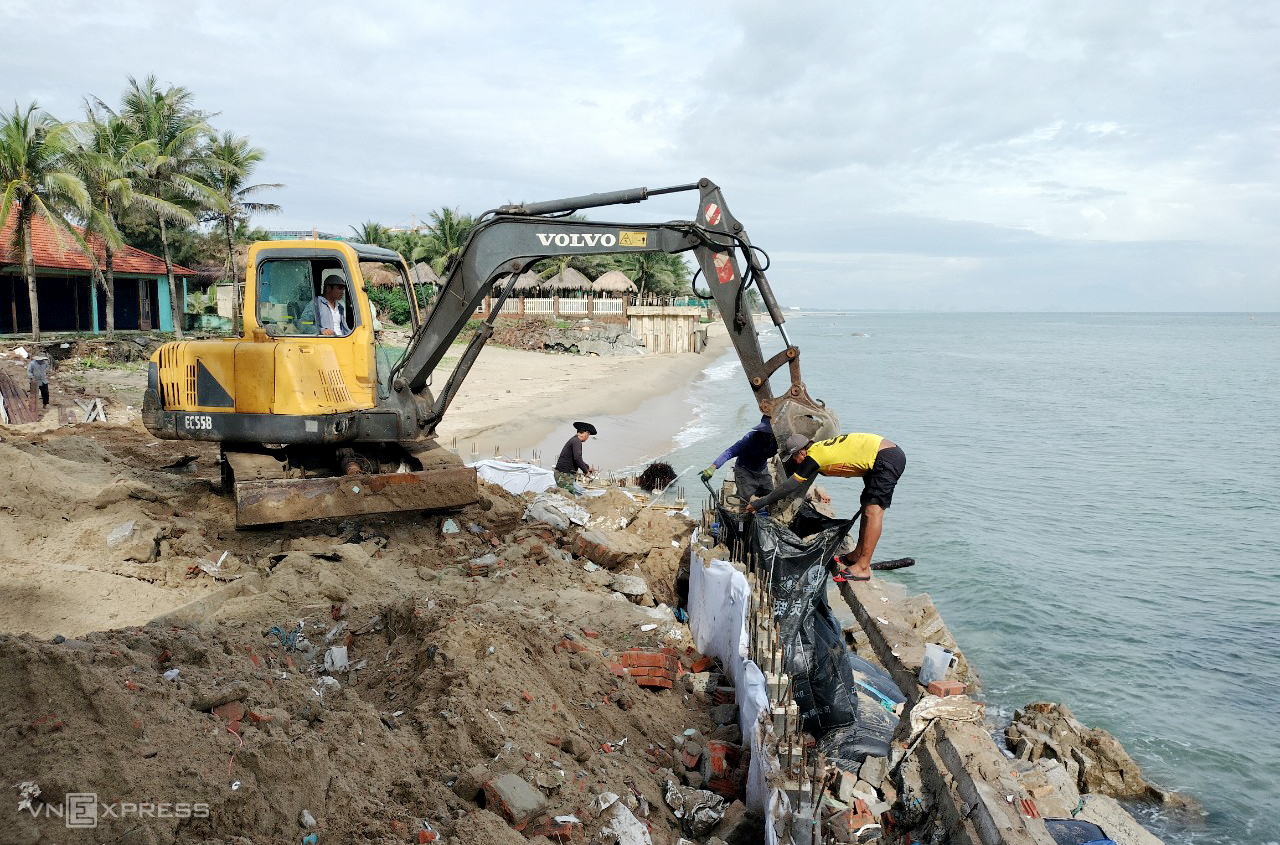 Quang Nam, home to the ancient town of Hoi An, is expected to be one of the hit-hardest localities.

A restaurant owner in Cua Dai has rented an excavator to scoop sand into sacks and build an anti-erosion embankment.

Over the years, the Cua Dai beach has been seriously eroded during the rainy season, badly affecting tourism. 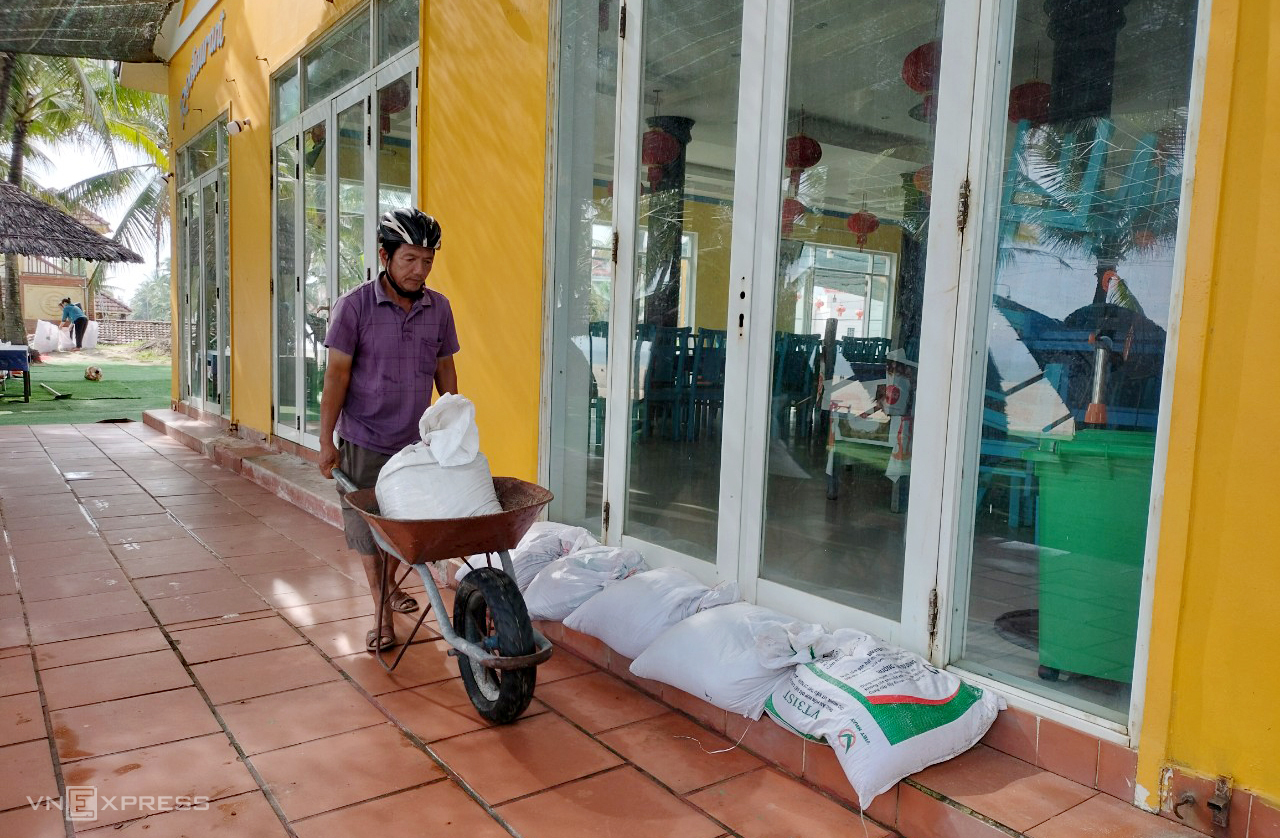 Le Hung Thang, a resident of Cua Dai Ward in Hoi An Town, places sandbags in front of his restaurant's glass doors. 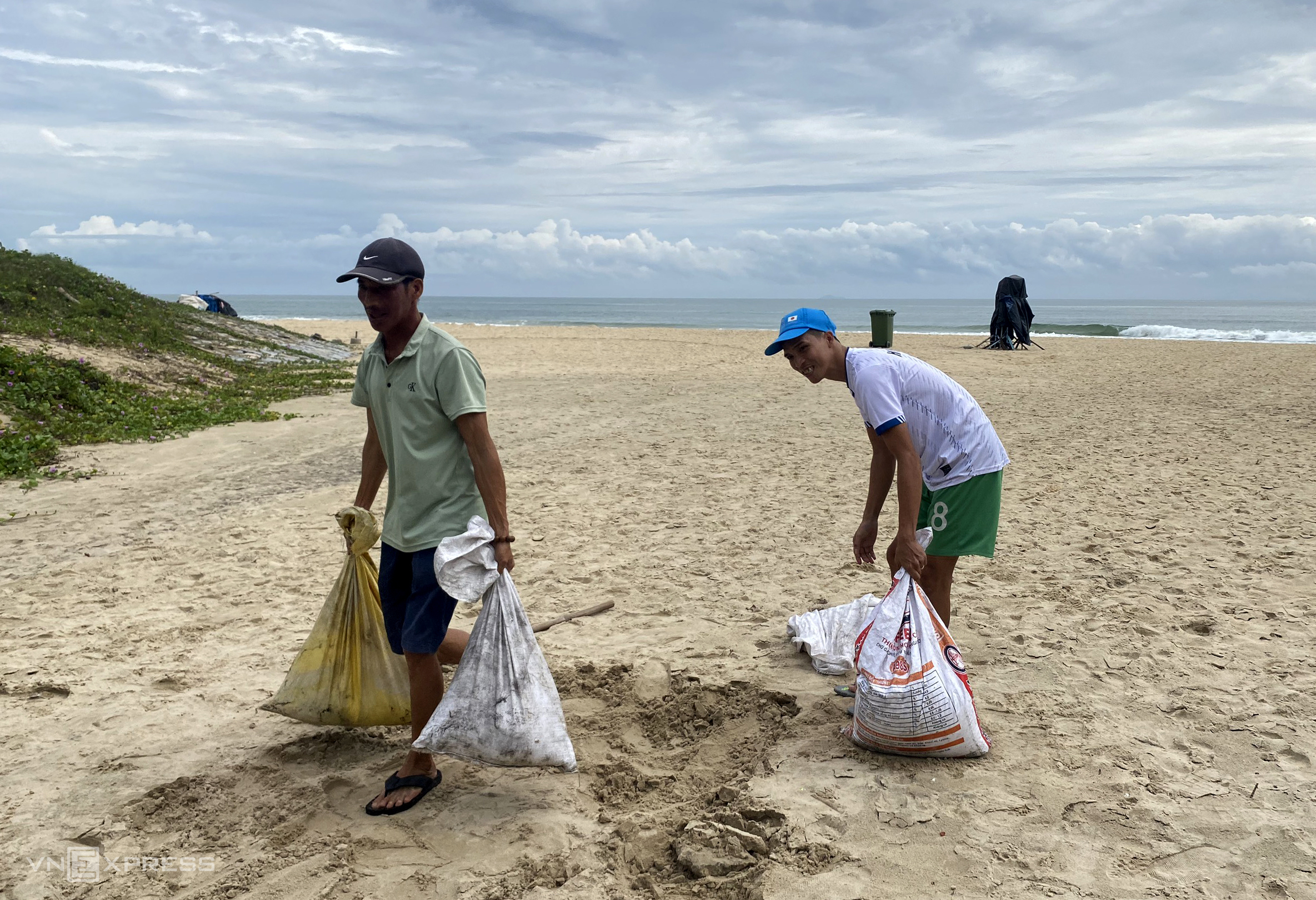 Residents of Tam Ky Town fill sacks with sand from the beach to place on roofs and other places to protect their houses.

Quang Nam has a 125-km-long coast covering six districts and towns. It is home to beautiful beaches like Ha My and An Bang. 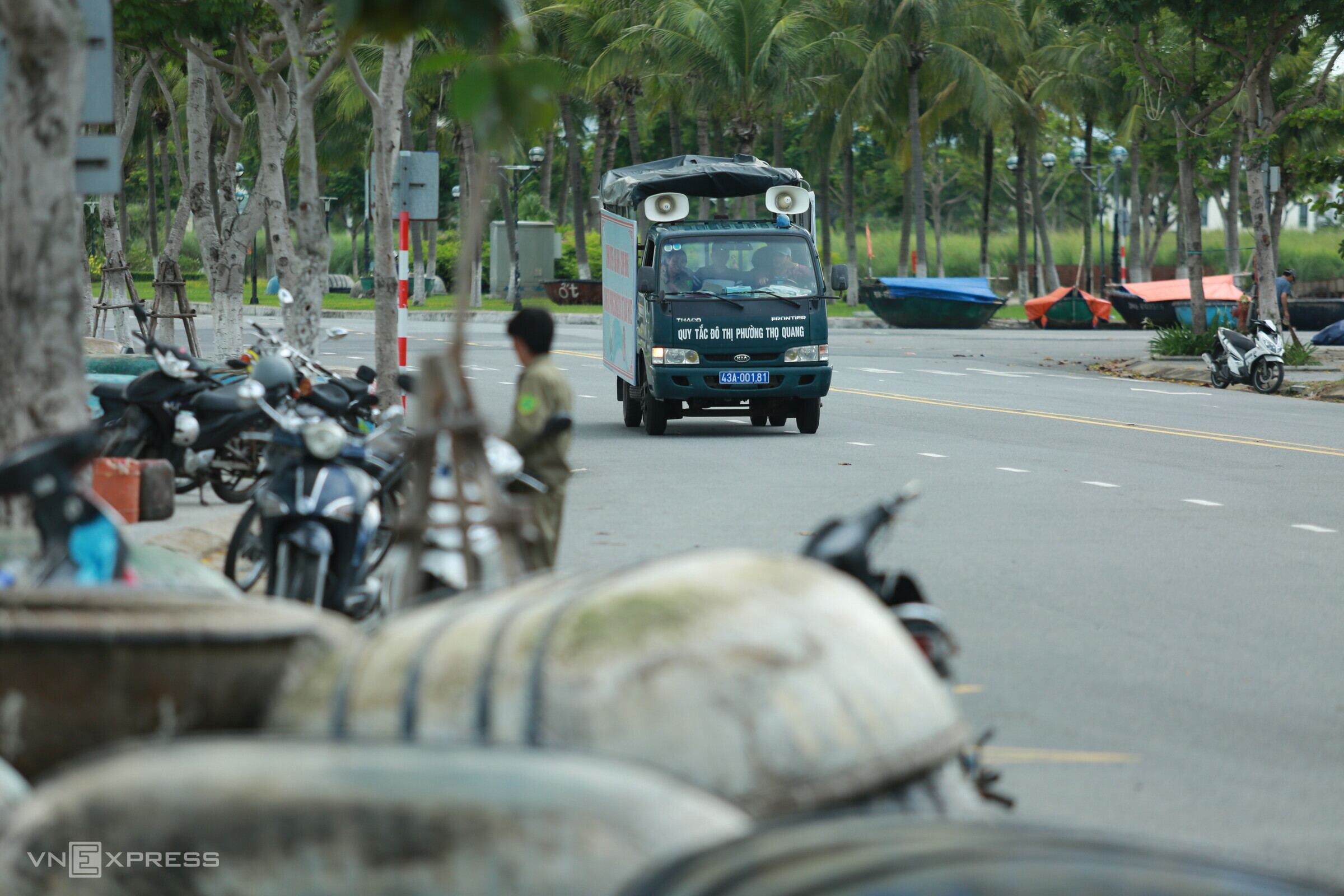 On Sunday afternoon, Da Nang City started broadcasting announcements about the storm and precautions that need to be taken from loudspeakers mounted on pickup trucks.

The city has asked authorities in coastal and low-lying areas to prepare plans for evacuating people to safe areas. 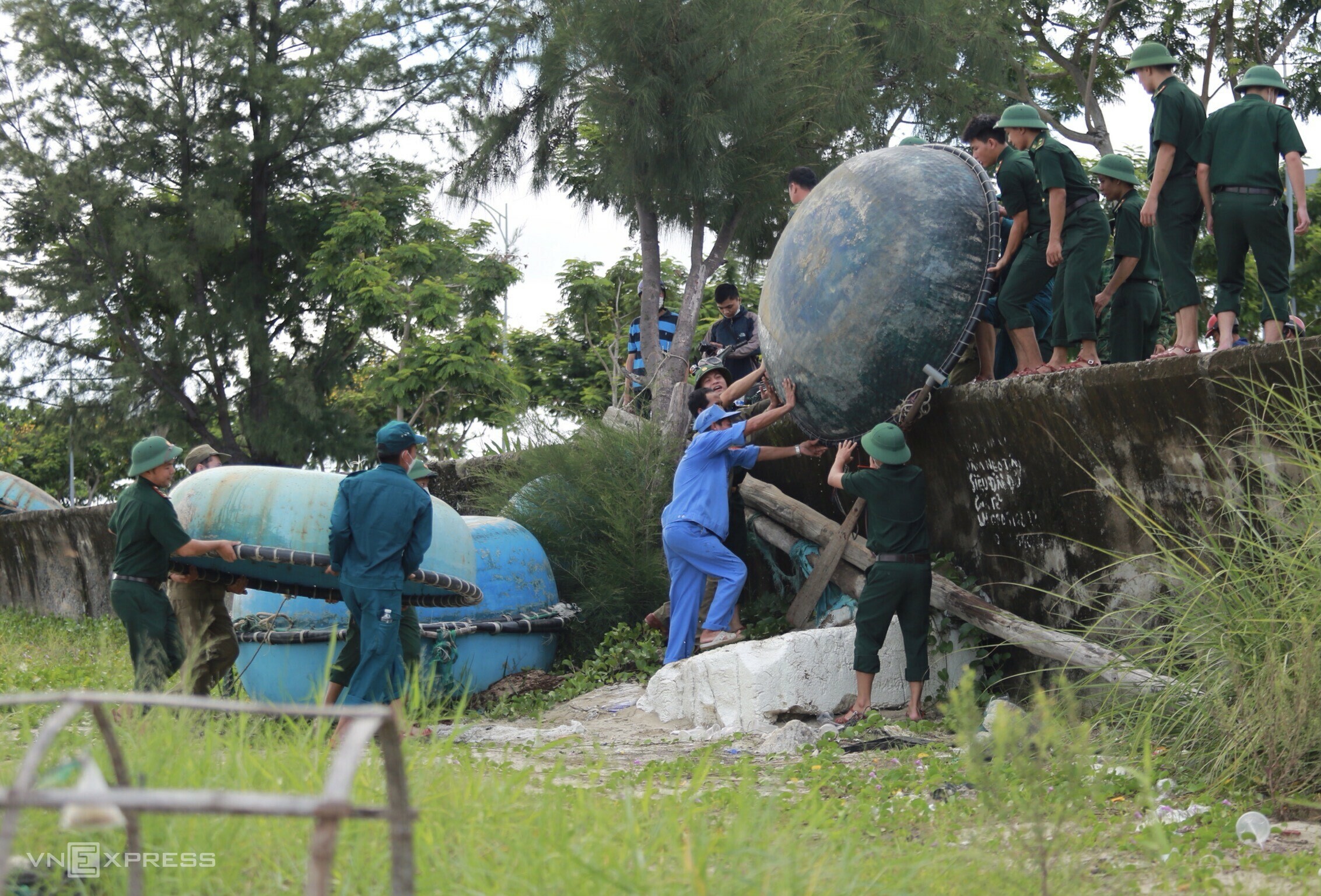 Border guard officers in Son Tra district and militia force help residents take their coracles to higher ground. They were taken across Hoang Sa Street and placed face down on the sidewalk. 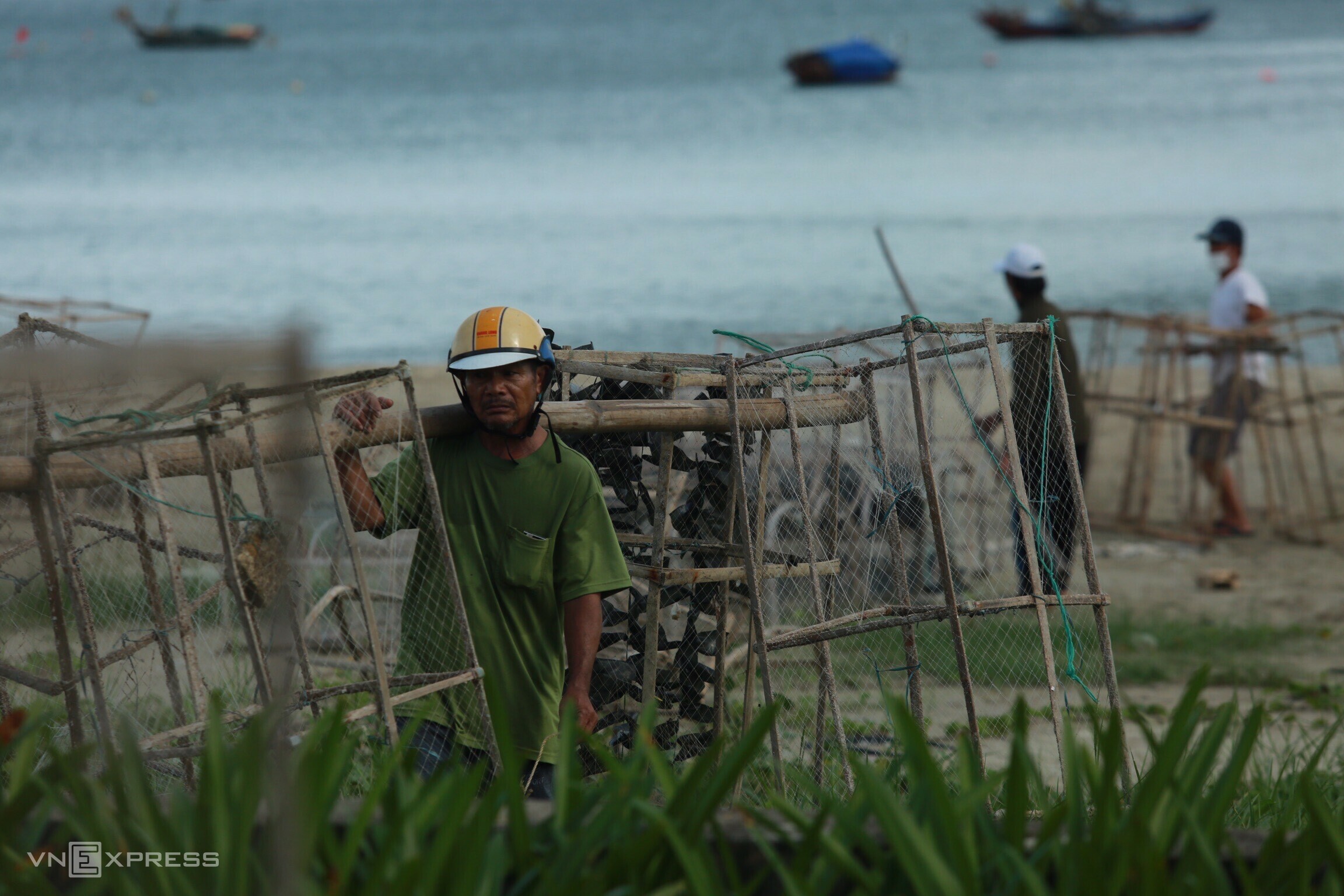 Residents take baskets and other fishing gear away from the beach.

“Although we are used to tropical storms every year, we are not taking risks and are proactively relocating our assets early,” said a fisherman.

Central Vietnam residents brace in a rush for giant Storm Noru have 750 words, post on e.vnexpress.net at September 25, 2022. This is cached page on Talk Vietnam. If you want remove this page, please contact us.