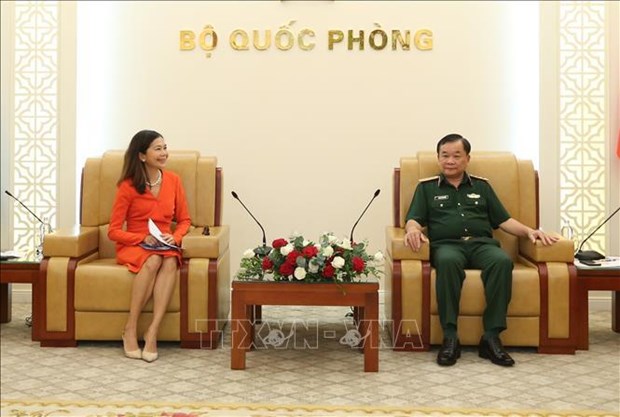 Chien appreciated the cooperation and assistance from the UN and its agencies in Vietnam, especially the UN Resident Coordinator Office, when the country served as the ASEAN Chair in 2020 and a non-permanent member of the UN Security Council during 2020 – 2021.

He thanked the UN and relevant agencies for working closely with Vietnam to successfully carry out many war aftermath settlement activities, particularly the programmes and projects on addressing war-left unexploded ordnances and toxic chemicals, resulting in positive outcomes.

The official said he hopes the UN will continue coordinating with the Defence Ministry in war aftermath settlement through financial and technical aid, capacity building, experience sharing, and database building.

Since Vietnam officially joined UN peacekeeping forces in 2014, it has successfully deployed over 500 personnel to peacekeeping missions and the UN headquarters. It is also the first country in Southeast Asia to implement three training courses on heavy engineering equipment under the Vietnam – UN – Japan trilateral partnership programme, receiving high evaluation from UN leaders.

The country has always maintained a rate of female participation in peacekeeping operations higher than the average, and pledges to maintain and increase the rate to over 20% by 2025, according to Chien.

Vietnam will further engage in UN peacekeeping operations, including sending personnel to more missions and diversifying participation forms, he noted, adding that it plans to deploy police to the operations.

The official asked the UN to keep supporting Vietnam's commitments and political resolve to join peacekeeping operations, and create favourable conditions for further enhancing cooperation in this regard.

For her part, Tamesis applauded Vietnam’s efforts, especially its military and police forces, to contain the COVID-19 pandemic.

The UN will assist the Vietnamese Government and people to secure the best possible post-pandemic socio-economic recovery and meet healthcare-related demand, she went on.

The official said she recently had the honour to sign the Strategic Framework for Sustainable Development Cooperation with the Vietnamese Government, describing it as a very important document outlining the UN's strategy and assistance priorities for the country in the next five years. The document also underlined the UN's role in helping Vietnam recover after the pandemic and ensure that no one is left behind.

The Resident Coordinator spoke highly of Vietnam's achievements in joining UN peacekeeping operations, including the high rate of female participation, noting the UN pledges to continue assistance in this field.

The UN also highly values Vietnam sending police officers to peacekeeping operations, including three to the mission in South Sudan and one to the Police Division in New York, Tamesis added./.

Vietnam to engage in UN peacekeeping operations more extensively: official have 662 words, post on en.vietnamplus.vn at August 12, 2022. This is cached page on Talk Vietnam. If you want remove this page, please contact us.