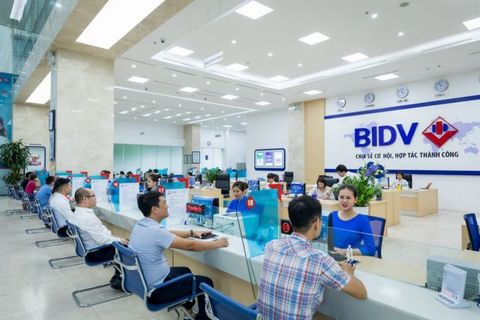 Customers at BIDV’s trading office. The bank’s shares climbed 4.59 per cent on Monday, leading the rally. —Photo courtesy of BIDV

The market ended mixed on Monday, with benchmark indices gaining points on the return of cash flow improving general sentiment.

The market's breadth was positive with more stocks increasing, while liquidity also rose over the previous session. Accordingly, matching value on HoSE jumped 15 per cent to nearly VND14 trillion (US$596.8 million), equivalent to a matching volume of 586 million shares.

The market benchmark rallied for the second straight session, boosted by the uptrend of large-cap stocks. The 30 biggest stocks tracker VN30-Index closed the trading day at 1,293.79 points, up 2.83 points, or 3.1 per cent.

Analysts from Saigon-Hanoi Securities JSC (SHS) said that the market's short-term trend remains positive, and the VN-Index is likely to head toward the next resistance territory of 1,260-1,285 points.

Meanwhile, the market continues to form an accumulation zone on low valuation for a long-term trend as economic growth is maintained, providing many investment opportunities.

During the session, nearly 81.1 million shares were traded on the northern bourse, worth over VND1.65 trillion.

Foreign investors were still net buyers on the market, with a net value of VND62.9 billion. Particularly, they net bought VND65.19 billion on HoSE and VND26.13 billion on HNX, while net sold VND28.42 billion on UPCoM. — VNS

Return of cash flow lifts investor sentiment have 594 words, post on bizhub.vn at August 15, 2022. This is cached page on Talk Vietnam. If you want remove this page, please contact us.