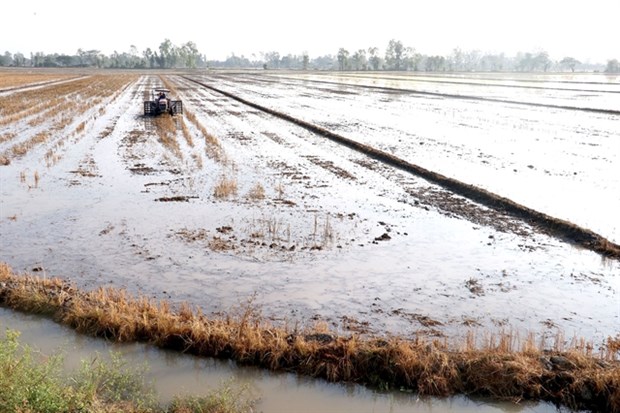 HCM City (VNS/VNA) – The Mekong Delta is expected to have less flooding than normal this year, according to the Directorate of Water Resources.

The delta, the country largest producer of rice, fruits and seafood, is normally flooded in the Mekong's upstream areas, and this fertilises the soil as sediments are deposited and brings river creatures into farms.

The floods are expected to peak at 3.5-3.7m at the Tan Chau Station in An Giang province in October, the directorate said.

They are estimated to reach 3 metres by the end of this month, but will not affect the cultivation the autumn-winter crop.

However, the high tides are expected to be high this year and flood low-lying areas in the delta's central and coastal areas, especially when the tides occur at the same time as heavy rains.

The flooding is now low and does not affect agriculture production or daily life.

The water levels in the Tien and Hau rivers, two major tributaries of the Mekong River, reached 1.84m at Tan Chau Station and 1.87m at Chau Doc Station in early last week, according to the National Centre for Hydro-Meteorology Forecasting.

An Giang and Dong Thap provinces are on the border with Cambodia, from where the Mekong enters Vietnam and are the first localities to be flooded annually.

To avoid damages and to benefit from the flooding, they take various measures every year.

An Giang has warned its farmers not to grow the autumn-winter rice in areas that lack dykes.

Tran Anh Thu, deputy chairman of the province People's Committee, said to sow the crop effectively, the Department of Agriculture and Rural Development has been instructed to assist localities with inspecting and consolidating sluices and flood-prevention dykes.

"Farmers should not grow the autumn-winter rice in flood-prone areas."

In Dong Thap, farmers will not cultivate the autumn-winter rice on more than 88,000ha of fields and will release floodwaters into them to fertilise the soil and destroy disease-causing pathogens.

The paddies are mostly in Chau Thanh, Cao Lanh, and Thap Muoi districts.

The floodwaters also provide livelihoods to farmers by bringing fish and other creatures into their lands and also enabling them to farm them.

Handicraft villages that make tools for catching fish and small boats are also busy during the flooding season ./.

Mekong Delta floods to be below normal this year: authorities have 582 words, post on en.vietnamplus.vn at August 15, 2022. This is cached page on Talk Vietnam. If you want remove this page, please contact us.