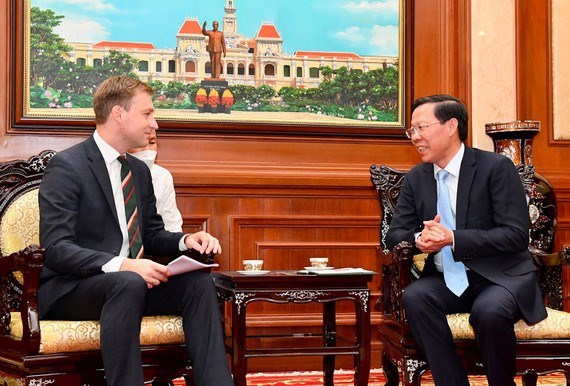 During the meeting, Mai expressed the belief that the opening of the Belarus ian Consulate General in HCM City will contribute to fostering cooperation between the two countries and their localities, affirming that the municipal authority will create favourable conditions for the mission’s operation.

He suggested the two countries strengthen cooperation in terms of trade, investment, culture, education and tourism, which he said will be a foundation for further developing the Vietnam – Belarus relations in general and between HCM City and Belarusian localities in particular.

Regarding the Belarusian Prime Minister’s visit to Vietnam slated for late this year, Mai said HCM City will be honoured to welcome the Belarusian leader.

Regarding the cooperative relationship between HCM City and Minsk city of Belarus, the official proposed that the two sides select specific items to carry out in the framework of the cooperation programme between the two localities in the 2020-2025 period.

For his part, Varankov affirmed that his country considers Vietnam one of its important partners in the region, and wishes to develop a strategic partnership with the Southeast Asian nation.

The opening of the Belarusian Consulate General in the Vietnamese southern hub is a testament to the importance of cooperation with Vietnam, particularly in the context of the two countries celebrating the 30th anniversary of their diplomatic ties, he noted.

HCM City looks to boost ties with Belarus have 449 words, post on en.vietnamplus.vn at August 10, 2022. This is cached page on Talk Vietnam. If you want remove this page, please contact us.