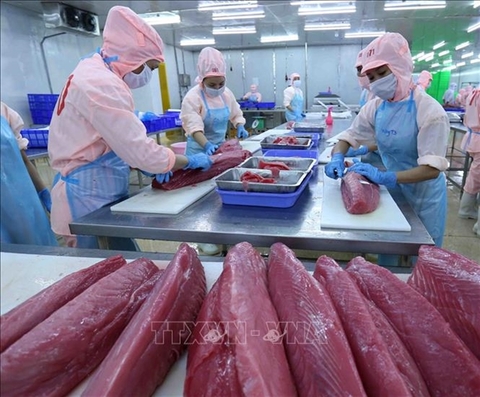 Viet Nam's exports of tuna products to France in the first seven months of the year were 203 per cent higher year-on-year. — VNA/VNS Photo

The value of aquatic exports in July fell below US$1 billion for the first time in 2022, according to the Vietnam Association of Seafood Exporters and Producers (VASEP).

It was expected to fetch $970 million, up 14 per cent year-on-year and 4 per cent month-on-month.

The country's total aquatic export turnover in the first seven months of this year reached nearly $6.7 billion, an increase of 35 per cent compared with the same period last year.

After recording a sharp rise of 34-62 per cent in the first five months of the year, aquatic exports began cooling in June with an increase of just 18 per cent.

The decline is mainly due to unfavourable weather, with early rains affecting seafood production. The stockpile of aquatic products from last year has also dropped.

Shrimp exports in June decreased by 1 per cent compared to the same period last year because of a shortage of raw materials. It continued to fall by nearly 13 per cent in July, reaching only $385 million. Viet Nam earned $2.65 billion from shrimp exports in the first seven months, up 22 per cent year-on-year.

Export earnings from pangasius reached $197 million in July, up 56 per cent year-on-year. By the end of July, its value hit over $1.6 billion, an increase of 79 per cent over the same period last year.

Meanwhile, exports of tuna, squid, octopus and other marine fish maintained a high growth rate of 37-44 per cent in July. In the first seven months of 2022, tuna exports increased by 53 per cent to reach $641 million, while those of squid and octopus, and other fish surged by 31 per cent and 16 per cent, respectively, earning $417 million and over $1.1 billion.

Meanwhile, the export of seafood products to the European Union grew by 28 per cent in July, with the value hitting $829 million in the first seven months. Export earnings from seafood to China reached $1 billion in the period, up 71 per cent year-on-year.

VASEP forecasts that seafood exports in the third quarter of this year will grow slower than in the second and first quarters, with export value expected to hit about $3 billion.

Tuna exports to France topped $350 million in the first seven months of the year, a 203 per cent increase year-on-year, according to VASEP.

Tuna fishing is being hampered in France and some other EU countries by factors like global political complications, inflation and the euro falling against the US dollar, according to VASEP.

France's tuna imports from other Asian countries is also rising. Viet Nam is only France's 14th largest supplier outside Europe.

European tourism is recovering, which is leading to higher import demand for fresh and frozen tuna as well as large-sized canned tuna for restaurants.

This is playing a major role in facilitating Viet Nam's tuna exports to EU countries.

Viet Nam's exports to other markets also increased in the first half of the year, including to the US and members of the Comprehensive and Progressive Agreement for Trans-Pacific Partnership.

Aquatic exports drop below US$1 billion in July have 800 words, post on bizhub.vn at August 5, 2022. This is cached page on Talk Vietnam. If you want remove this page, please contact us.