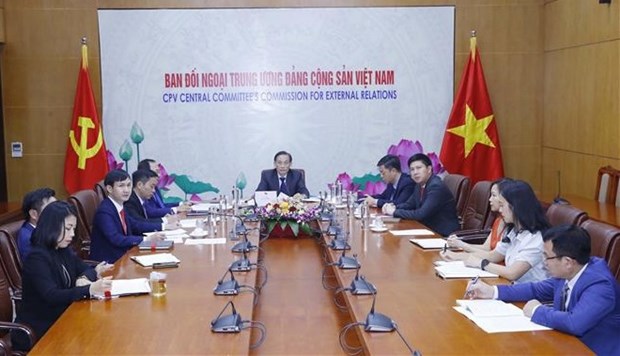 At the online meeting (Photo: VNA)

Trung conveyed congratulations from General Secretary Nguyen Phu Trong and other leaders of the CPV to JCP Chairman Shii Kazuo, leadership and all members of the JCP on the occasion of its 100th founding anniversary (July 15).

Yasuo conveyed regards from JCP Chairman Shii Kazuo to General Secretary Nguyen Phu Trong and other leaders of the CPV.

He appreciated the organisation of the online conversation just before the JCP's founding anniversary and the election of the House of Councillors on July 10.

The two officials informed each other about the situation, development and foreign policies of each Party; and exchanged opinions and assessments on the world and regional situation.

They also discussed and agreed on several cooperation orientations in the coming time such as resuming the exchange of delegations and meetings at all levels, increasing theoretical, experience and information exchange, and implementing agreements signed during the talks between the two Parties' senior leaders in December 2021. The agreements include active support for cooperation between people’s organisations to contribute to enhancing mutual understanding and strengthening the foundation of people-to-people friendship between the two Parties; and coordination in promoting the two countries’ relations.

Vietnamese, Japanese communist party officials discuss ways to intensify bilateral ties have 506 words, post on en.vietnamplus.vn at July 5, 2022. This is cached page on Talk Vietnam. If you want remove this page, please contact us.