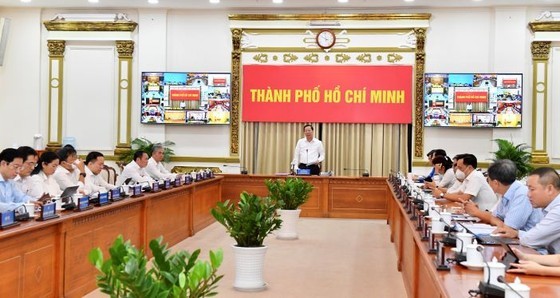 At the city's working place, chairman Mai informed prompt and comprehensive recovery of the city’s socio-economy and it is expected to reach the growth as the pre- Covid-19 pandemic period.

Specifically, the city's economic growth in the second quarter surged by 5.74 percent and up to 3.82 percent in the first half of the year. The budget revenue has reached 61.7 percent which would promote the whole year's economic growth to 6-6.5 percent.
According to chairman Mai, when the socio-economy of the city tends to strongly develop, HCMC has to focus on removing obstacles and difficulties related to procedures.

In addition, the city shall concentrate on drastically implementing the set targets, and planned programs, including administrative reforms meeting the demand of socio-economy recovery.

Besides, HCMC will partially sum up a year of implementing the model of urban authority, summarize the implementation of Politburo's Resolution No. 16-NQ/TW on developing Ho Chi Minh City and National Assembly's Resolution No. 54 for piloting a special mechanism and policy for the development of HCMC.

On the other hand, the city will also focus on promptly implementing the missions of socio-economy planning, review and adjust the general planning of the city and Thu Duc City. Specifically, the city shall concentrate on public disbursement to meet the year-end target, organizing monthly meetings to remove barriers and obstacles, establishing working teams serving for site clearance, high-value investment projects, ODA projects and so on.

In addition, the city will strongly develop the transport projects, comprising closed Ring Road No.2, Ring Road No.3 implementation, Ring Road No.4 warm-up , metro lines and expressways. Of which, the city had worked with relevant localities to consult the Government to soon issue the resolution to implement Ring Road No.3. The city will also concentrate on the infrastructure project of digital transformation, general database building serving for connectivity and implementation project No.6 of the Ministry of Public Security. Particularly, the city will focus on implementing the tasks of society, culture and social welfare.

Chairman Mai will also propose the Government soon promulgate the Resolution on implementing Ring Road No.3 and shall propose the Prime Minister direct relevant units to adjust the unit prices for construction projects as the construction materials tend to sharply surge.

HCMC proposes Government promulgate implementation resolution of Ring Road 3 have 673 words, post on m.sggpnews.org.vn at July 4, 2022. This is cached page on Talk Vietnam. If you want remove this page, please contact us.