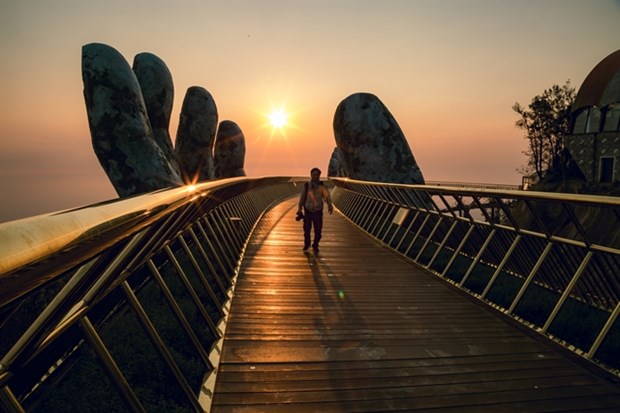 The Golden Bridge offers a check-in for tourists visiting the Sun World Ba Na Hills in Da Nang . The city has been designed as a liveable urban city. (Photo courtesy of Sun Group)

Da Nang (VNS/VNA) – With stable growth in the economy, infrastructure, urban management, tourism and investment attraction, the central city of Da Nang is challenging to develop into a 'liveable' city of regional and global status.

Economist Vo Tri Thanh said at a seminar on how to develop Da Nang as a destination and a liveable city in Vietnam and region, emphasising that the central city had not yet approached the 'liveable' standard and it needed much progress to reach the target.

Thanh said Da Nang had been known as a favourite destination in Vietnam but was not yet a 'worth living' location in terms of enjoyment, relaxation, and entertainment.

"A 'liveable' city requires maximising consumption, commodities, working places while promoting a 'green' environment, humanity, safe, smart and sustainable conditions. It means that everything is available to the needs of the people," Thanh said.

"The city should have a favourable business environment, hospitality, good working space condition, and accommodations in comparison to luxury areas such as Dubai and Singapore."

Tran Dinh Thien, former Director of the Vietnam Institute of Economics, said Da Nang had a decade of economic development from 2010-2020.

He said the city increased the Gross Regional Domestic Product (GRDP) by eight times as much as in 2010 while making it in the top-ten group in Provincial Competitive Index (PCI) Public Administration Performance Index from 2006-2021 and hosting 8.7 million tourists in the successful year of 2019.

Thien said the city had formed an attractive urban city in central Vietnam by planning key deep-sea airports, high-tech parks, an innovation centre, a logistics and multi-transport service centre, and a digital and smart urban city.

Luong Hoai Nam, a member of the Vietnam Tourism Advisory Council, suggested that Da Nang should build a destination for the 'super rich' with luxurious services at the airport, and a yacht harbour with docking for long stays.

He said the COVID-19 was a chance for luxury service promotion as 'rich' people sought a 'safe' location or hidden destination as a safe shelter for their family members.

Nam said Da Nang Airport, which plans to upgrade new terminals and a cargo terminal could handle 40 million passengers if it expands to the east with available area.

He also said visa exemptions should be applied to potential markets such as the European Union, India, Japan and others to boost the post-COVID-19 tourism recovery.

Tran Nguyen, head of the business section of Sun Group, said tourism was seen as one of the best income industries in Da Nang before the COVID-19 pandemic broke out.

She said the 10,000-seat restaurant and vine tunnel in Ba Na Hills – 1,500m above sea level – would be the favourite choice for nighttime entertainment during weekends and summer vacations.

She said the InterContinental Da Nang Sun Peninsula Resort – awarded the World's Leading Luxury Resort in 2014-2016 – had been one of the most luxurious accommodations for wealthy tourists.

The resort hosted a three-day vacation for billionaire financier George Soros in 2012.

Tourism made 23.7% of the city's GRDP in recent years.

Huynh Thi Lien Phuong, Director of the city's Investment Promotion Agency (IPA), said Da Nang had been revving up preparations for pivot projects such as an international finance centre, duty-free zone, nursing home, and international school with a hope that visitors would choose Da Nang as a second home, she said.

Da Nang has been planning to become a 'smart city' and the first in Vietnam to join the ASEAN 'smart' city network by 2030 in the form of a world destination and a 'liveable' city.

The new Lien Chieu port will be constructed by the third quarter of 2022 for handling cargo ships with 100,000 deadweight tonnage (DWT) and container ships with loading capacities from 6,000 to 8,000 twenty-foot equivalent units (TEUs), according to the city's IPA.

The Da Nang International Airport will handle 28 million passengers and 200,000 tonnes of cargo by 2030.

The Republic of Korea's LG Electronics began construction of its R&D centre – the second in Vietnam – in Da Nang in 2021, while the city will offer the most favourable conditions for Samsung to expand cooperation and investment in the city and central Vietnam.

Da Nang strives to develop itself into ‘liveable’ city have 1117 words, post on en.vietnamplus.vn at July 2, 2022. This is cached page on Talk Vietnam. If you want remove this page, please contact us.