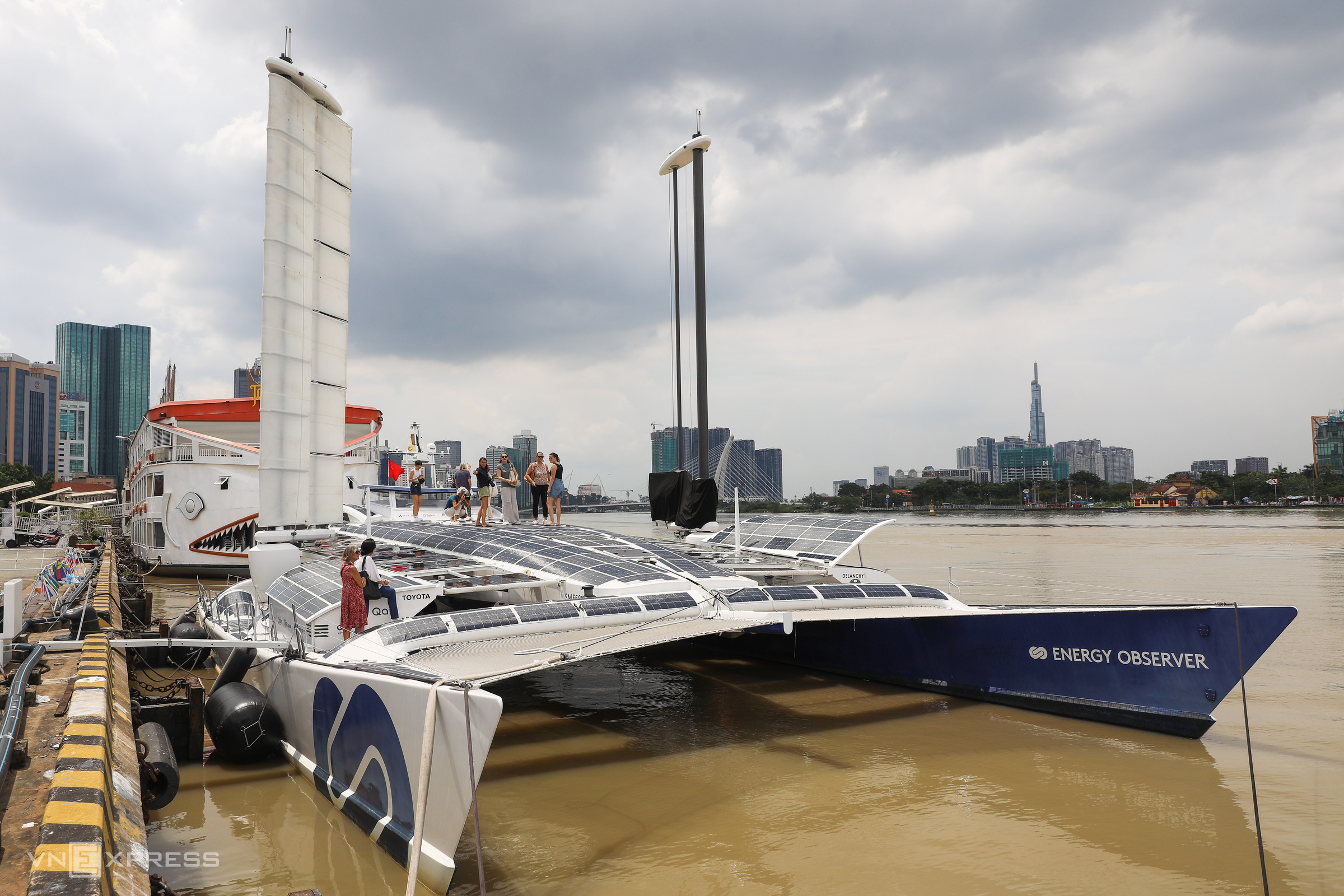 Energy Observer docks at Khanh Hoi Port in HCMC’s District 4 on Wednesday as part of its visit to the city from June 18 to 29.

The French vessel has been on a world tour for five years without having to consume any fossil fuel. It is the first vessel in the world that is autonomous in energy thanks to her onboard technologies, combining multiple sources of solar, wind and hydropower produced on board.

Following her launch in April 2017, Energy Observer departed on a world tour that year, with HCMC its 73rd stop.

Departing from its home port of Saint-Malo (France) in 2017, the Energy Observer has sailed more than 50,000 nautical miles and visited more than 40 countries and territories. 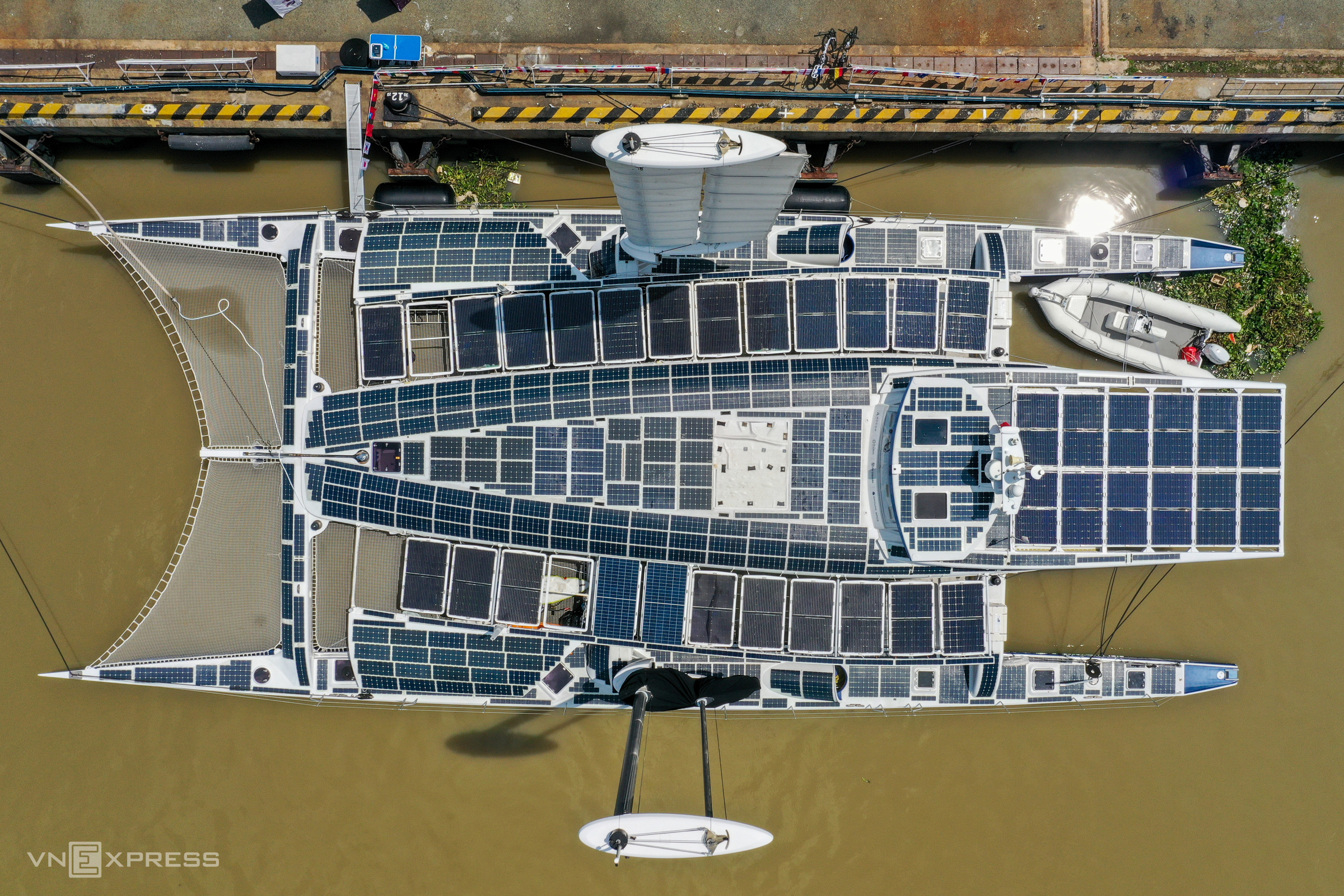 The Energy Observer features a dual-body design to reduce water resistance. The ship has a length of 30 meters, a width of 12 meters, and can reach a maximum speed of 14 knots per hour. On board, there are a total of more than 200 solar panels placed on the hull to receive energy from the sun.

The ship is on a mission to raise awareness for a green transition while exploring solutions to prove that another energy world is possible. 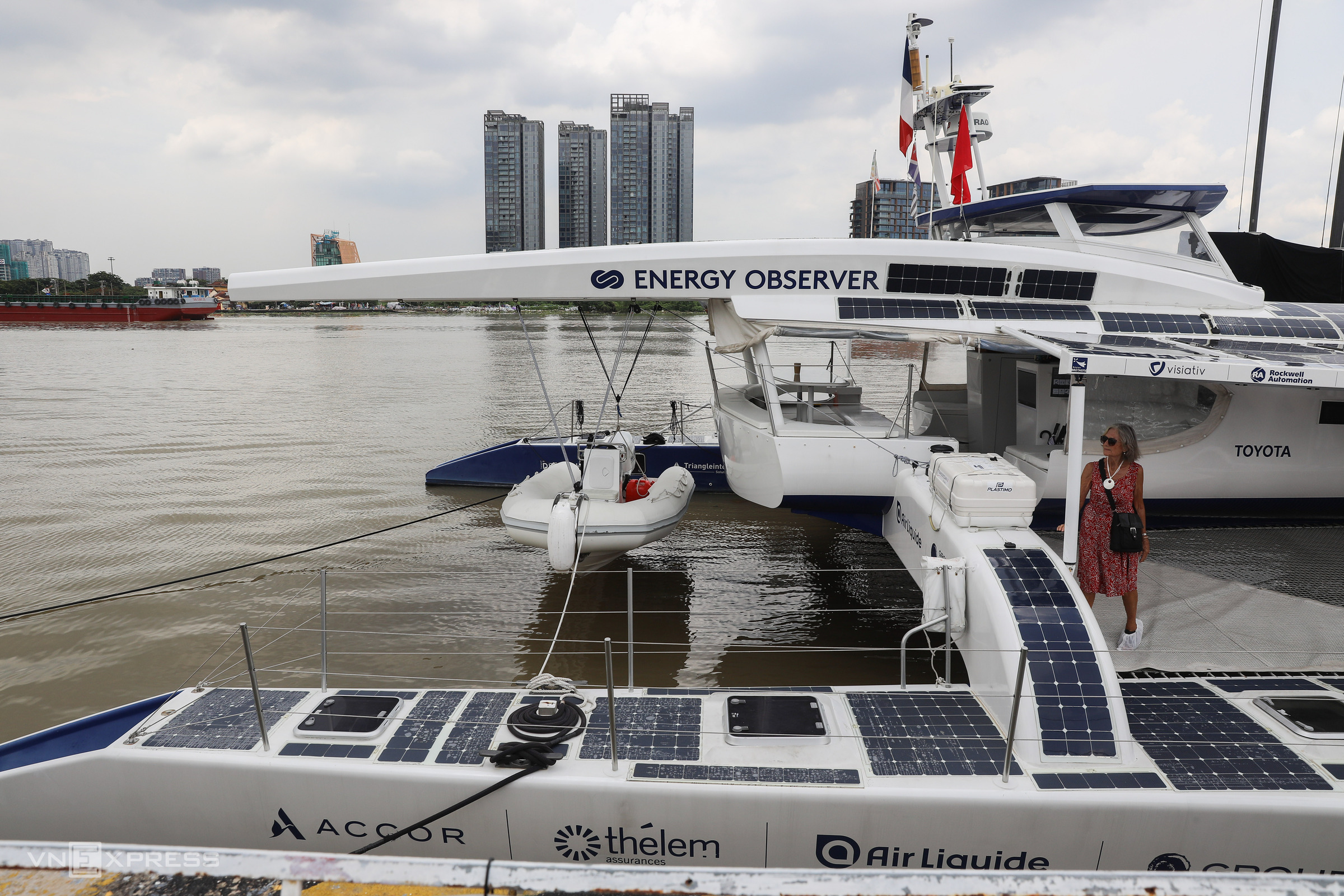 The stern of the ship has a two-hull design with energy panels placed around. In between the fuselages are lifebuoys and a seat with a roof.

At the stopover in HCMC, the crew of the Energy Observer will introduce the ship’s automated zero-emissions system to tourists, policy makers and students. 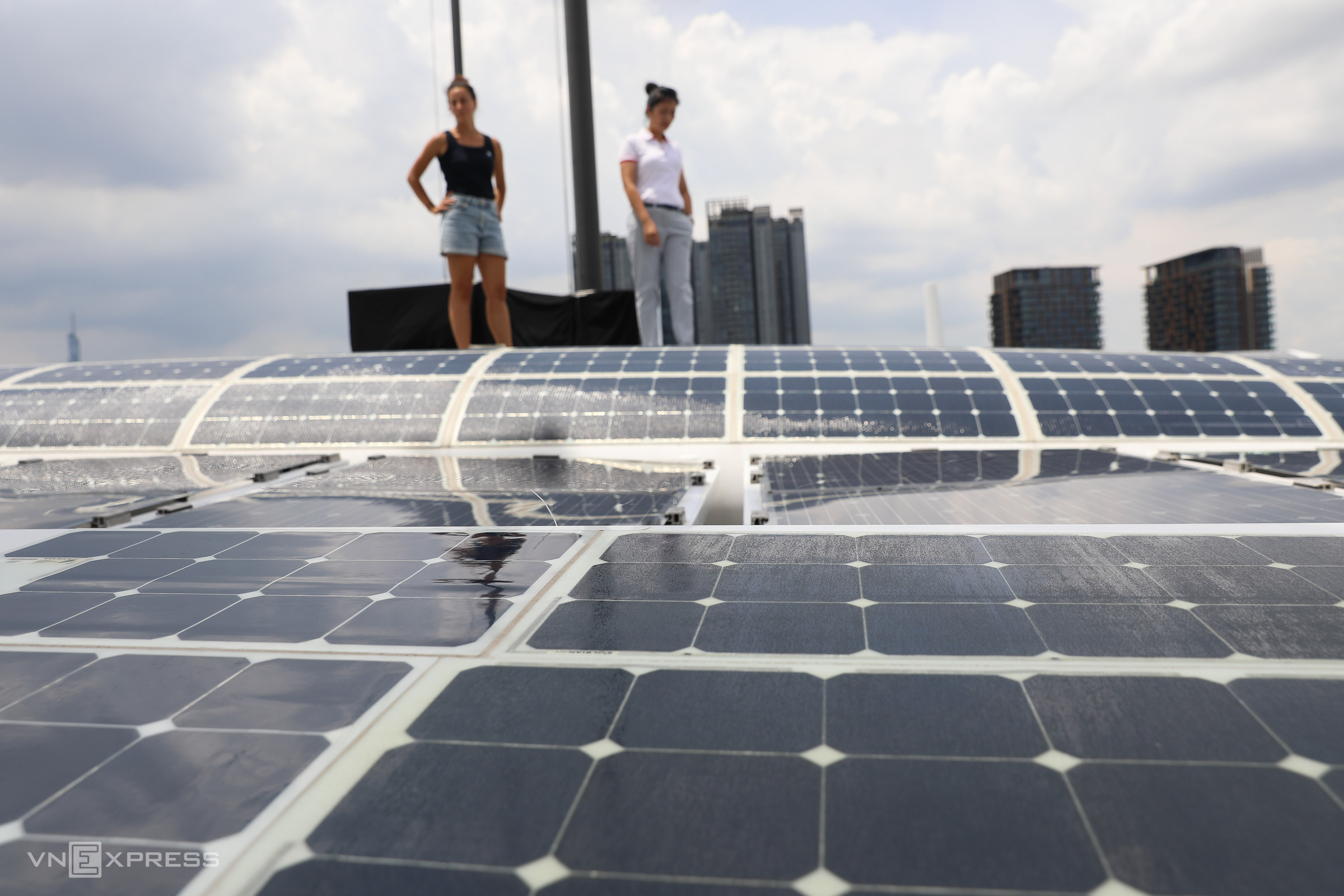 There are three types of energy batteries throughout the hull and depending on the installation location, different panels will be used.

The surface of the panel is made rough to increase light absorption and allow people to walk on it. 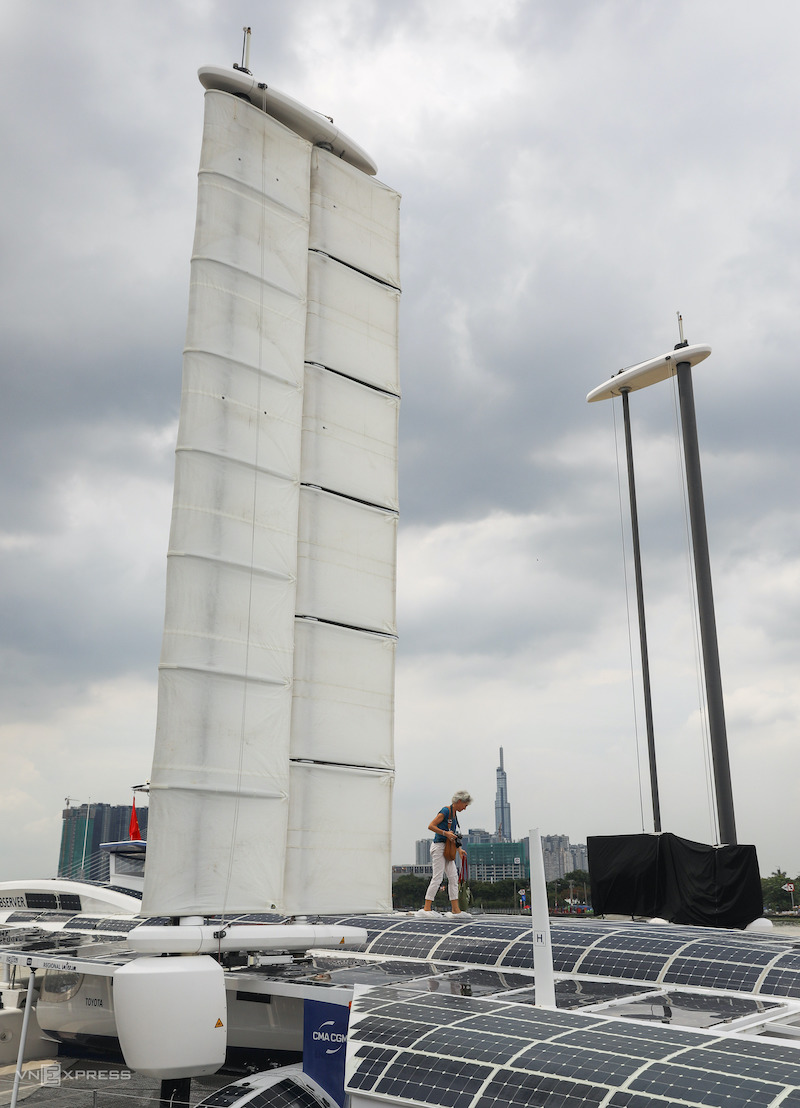 The ship has two masts running on electricity. The sailing system can be stretched to help the ship operate when the battery power is not enough.

To ensure compatibility, the fuel cell system is capable of providing stable power even when operating at high intensity throughout the journey. 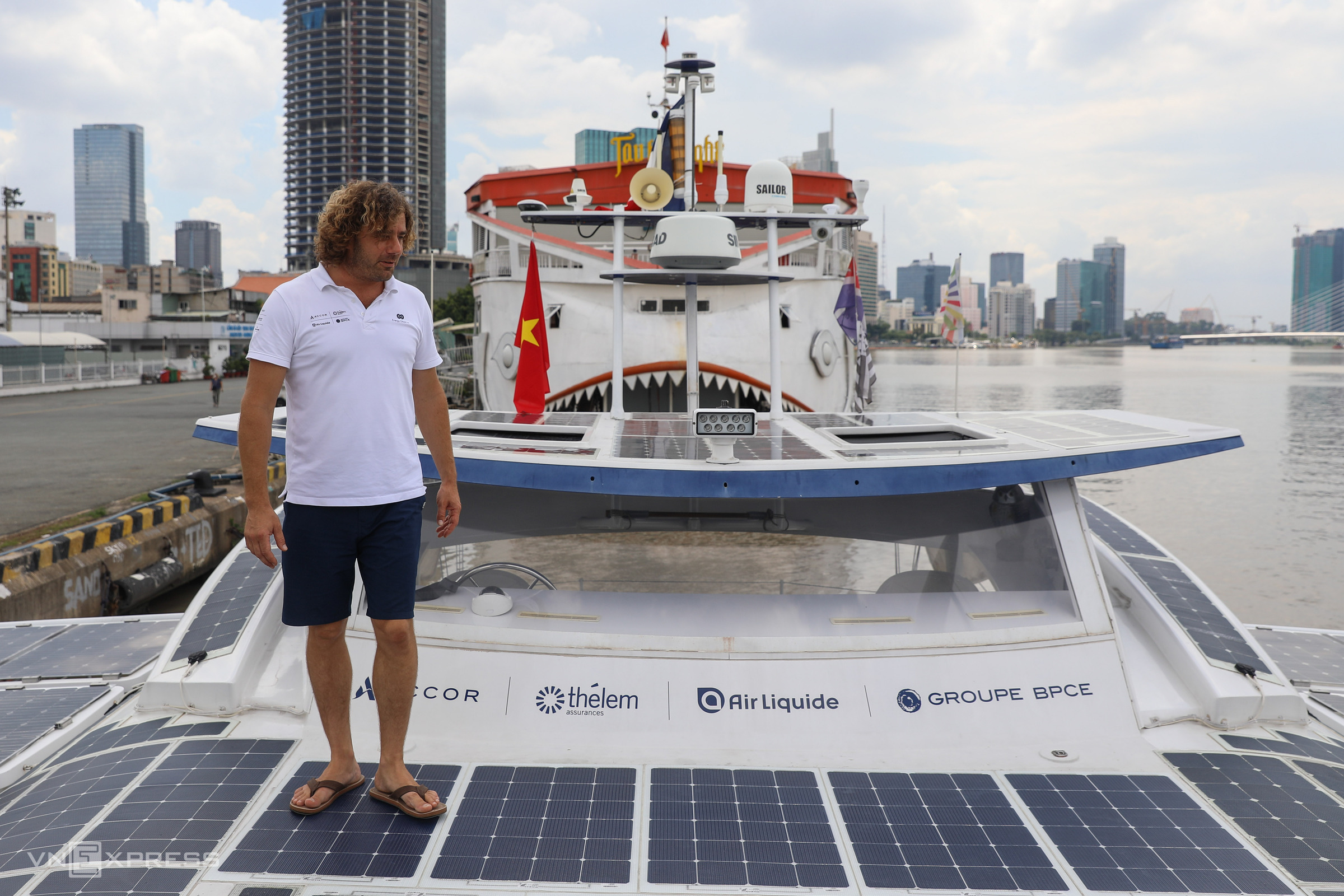 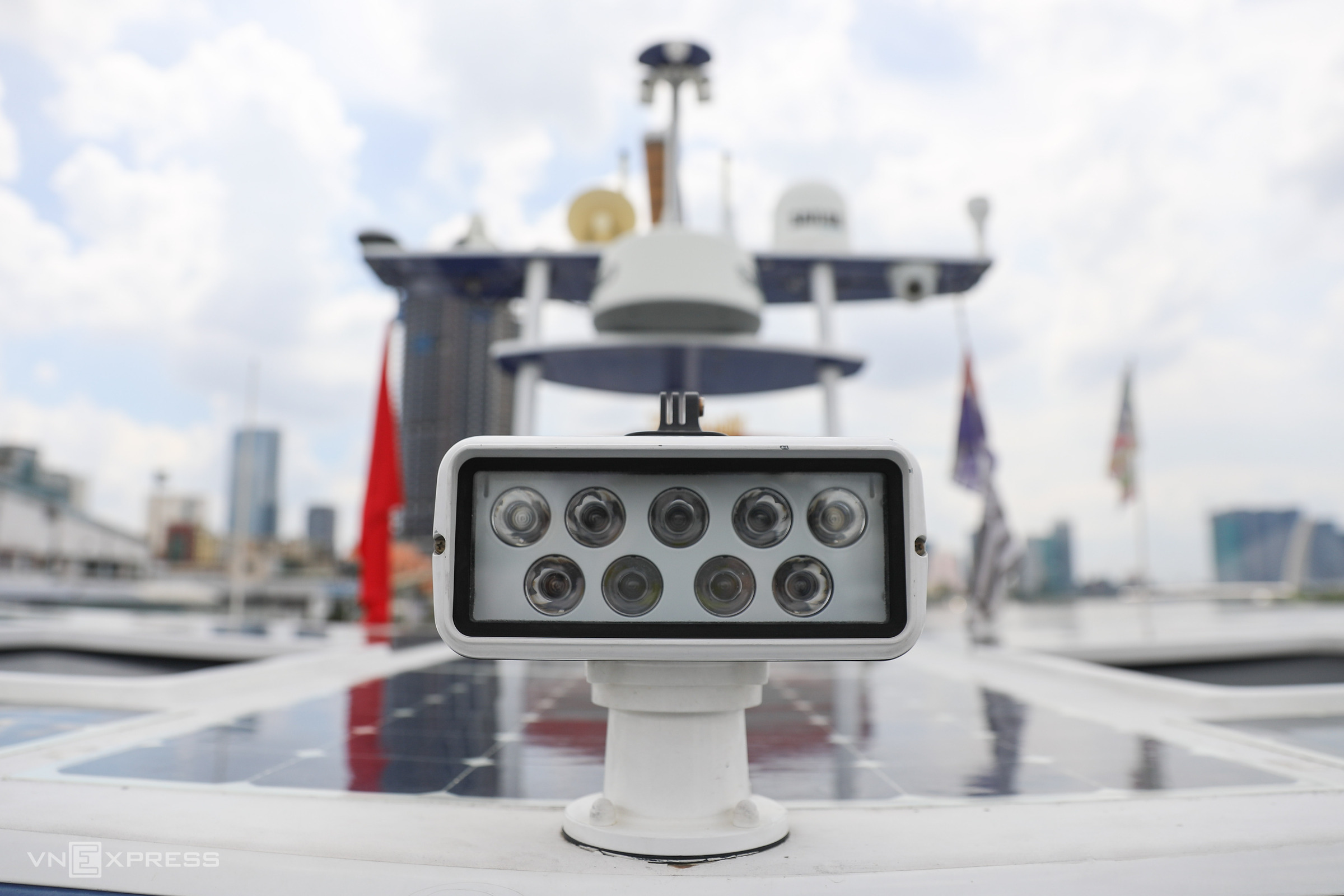 On the roof of the ship are radar, camera and light navigation systems. 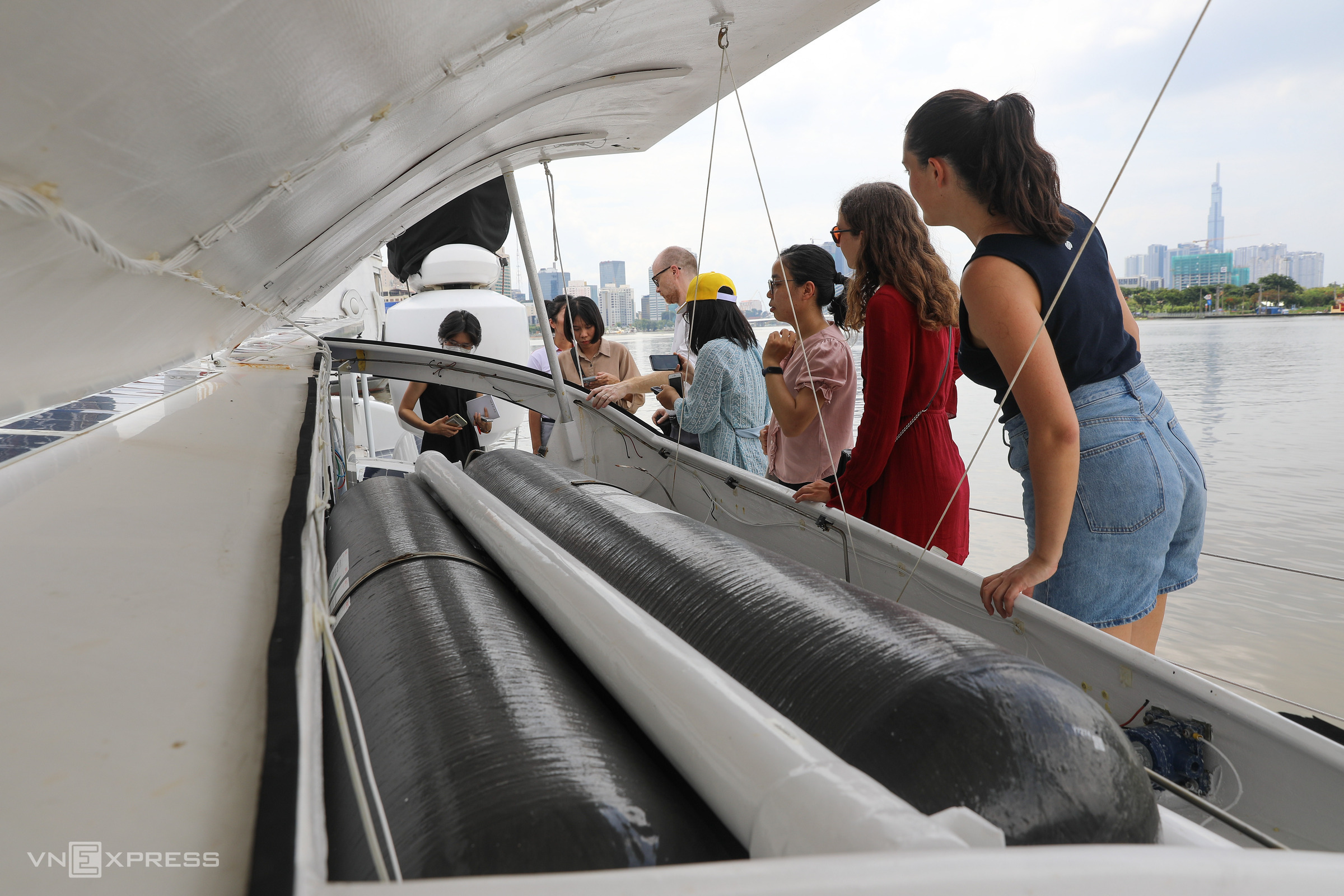 Visitors to the ship stand by a hydrogen chamber on the hull of the vessel. Hydrogen is produced directly on board from seawater. 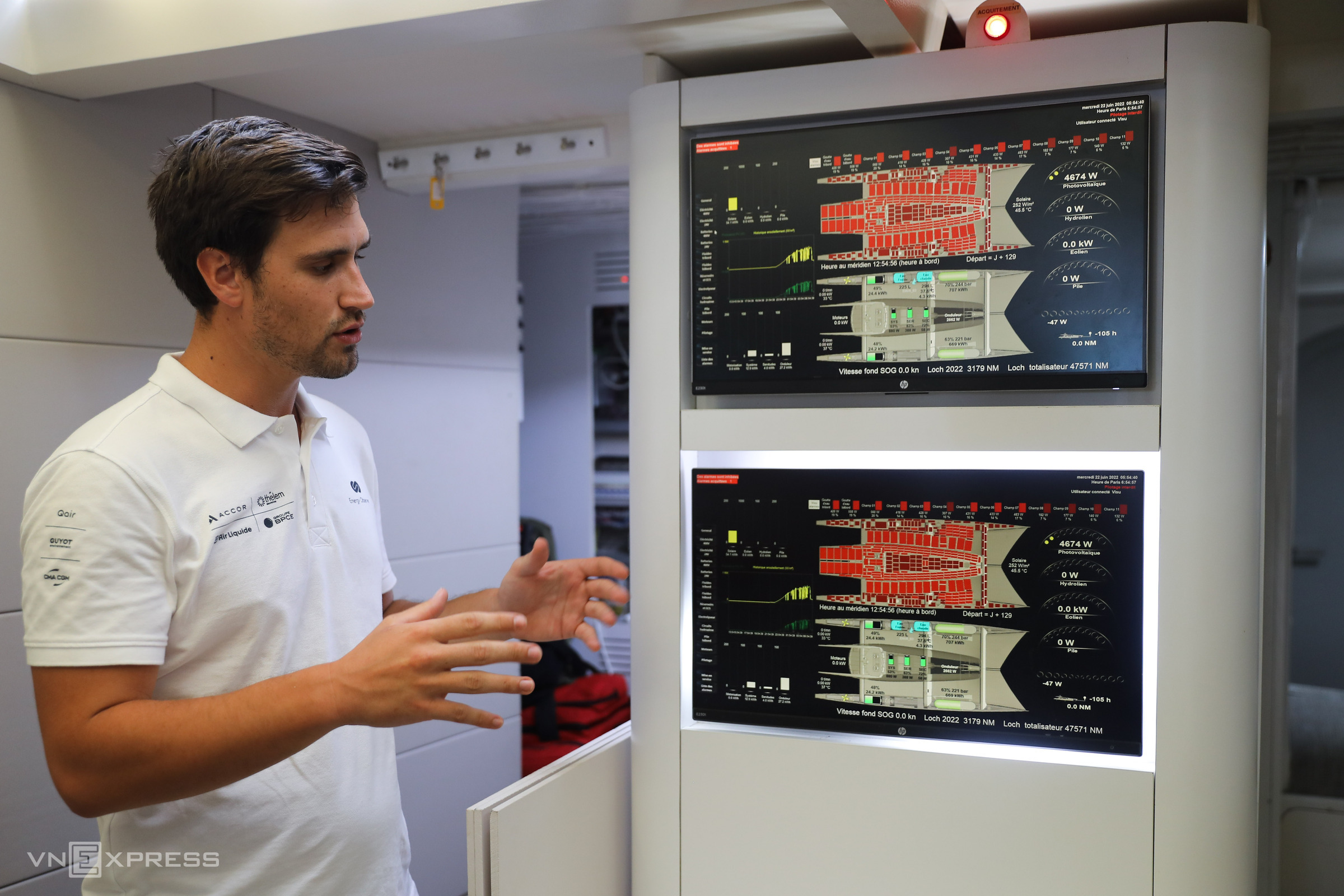 Engineer Luc Bourserie presents a system to manage the ship. Crew members can easily detect damage to the ship by looking at these screens. 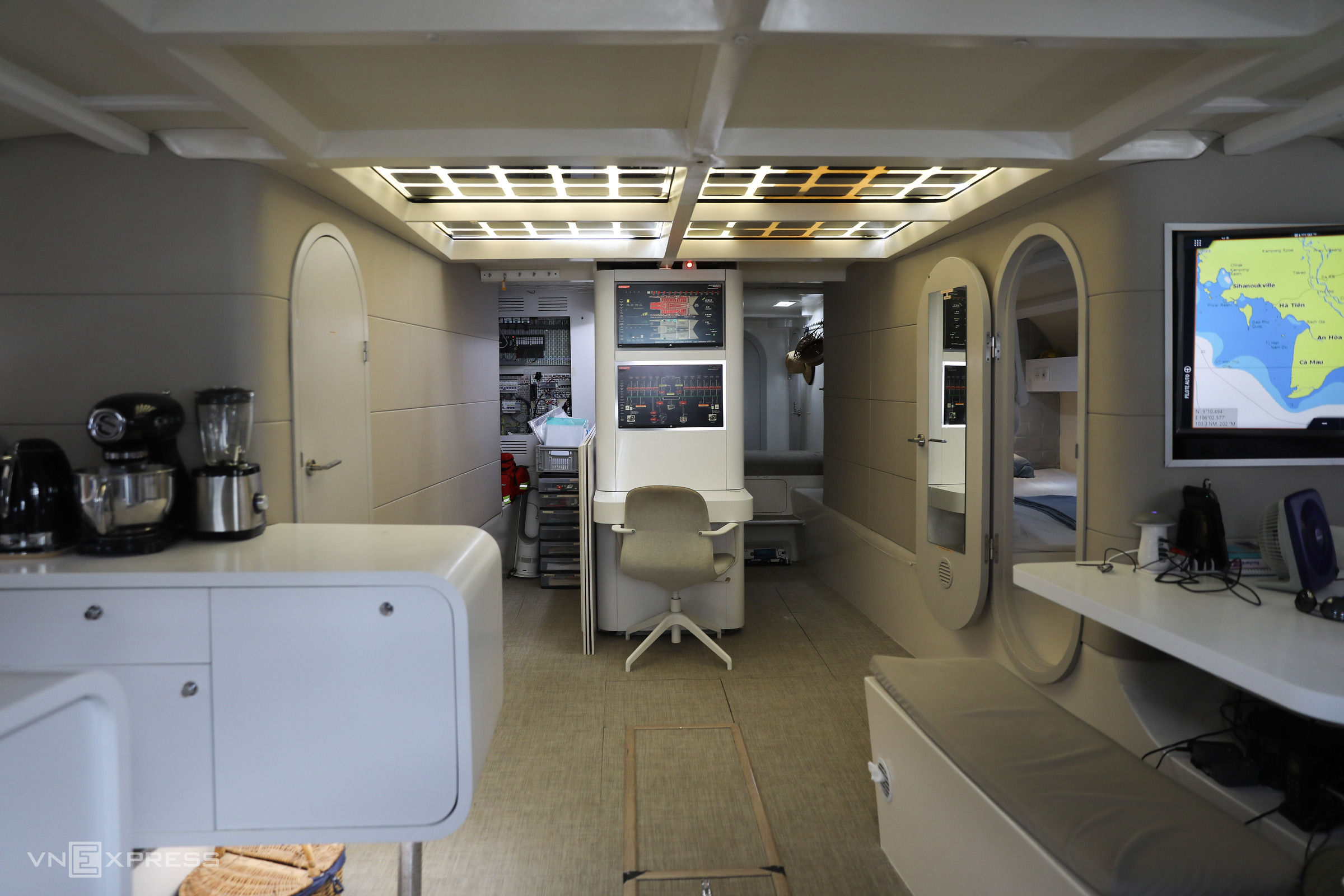 The ship provides accommodation for around 10 people. 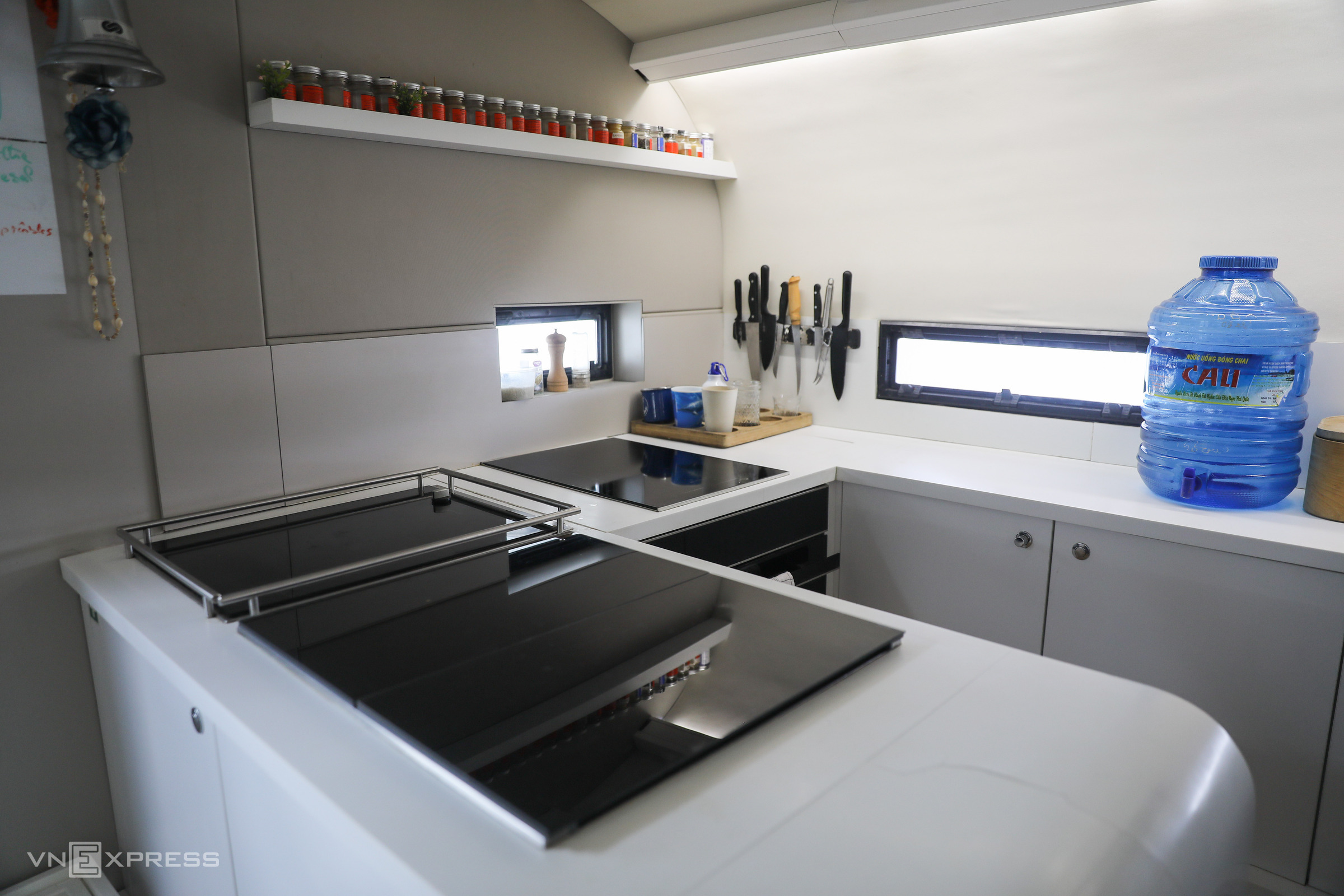 The kitchen on the ship. 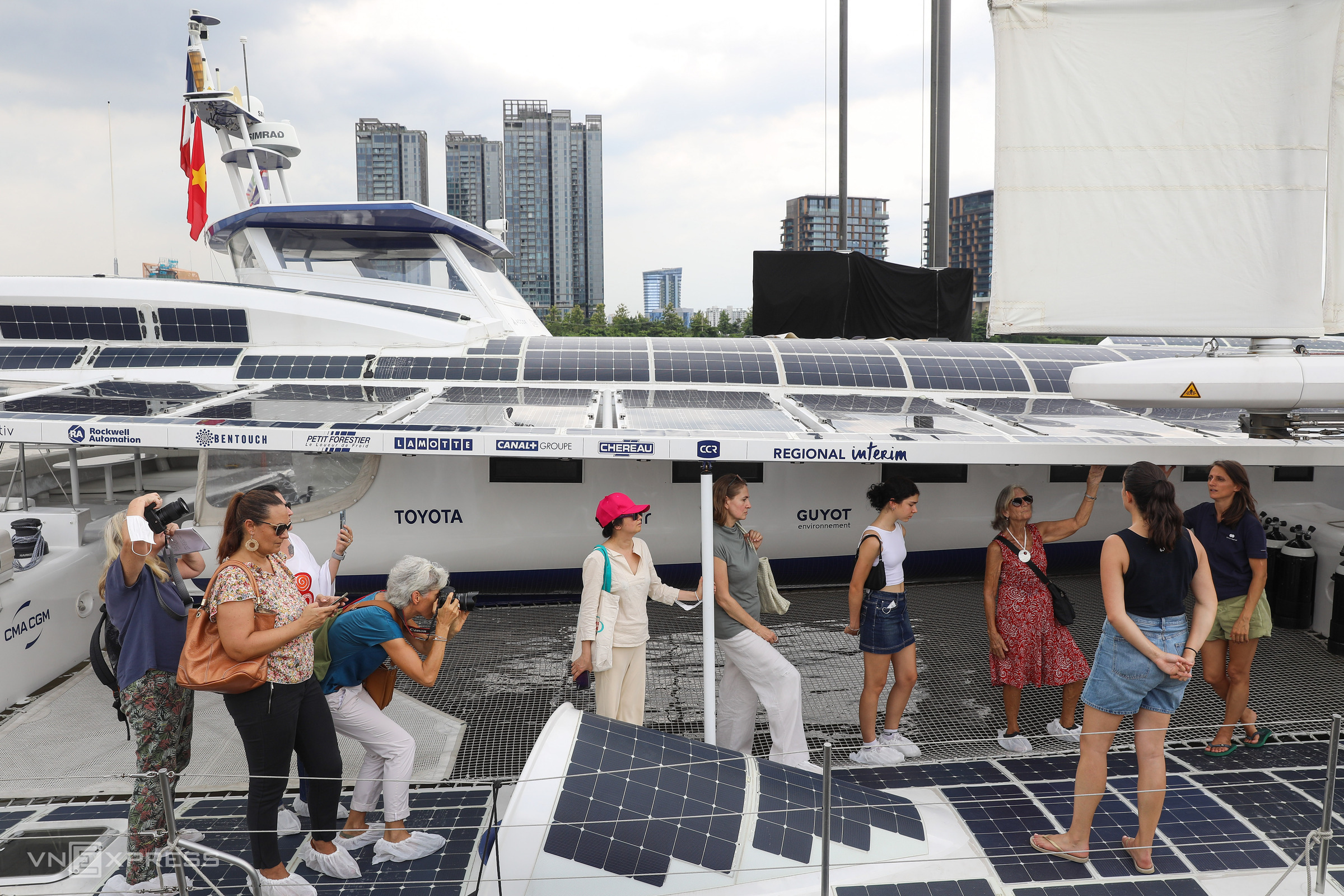 A delegation of visitors tour the ship Wednesday.

As planned, the crew of Energy Observer will observe and record issues related to pollution, including plastic pollution, the Can Gio mangrove forest on the city outskirts and UNESCO biosphere reserve, nearshore wind turbines, and salt-intrusion in the Mekong River during their tour to HCMC and other Southeast Asian destinations.

World’s first zero-emission ship docks in HCMC have 666 words, post on e.vnexpress.net at June 23, 2022. This is cached page on Talk Vietnam. If you want remove this page, please contact us.