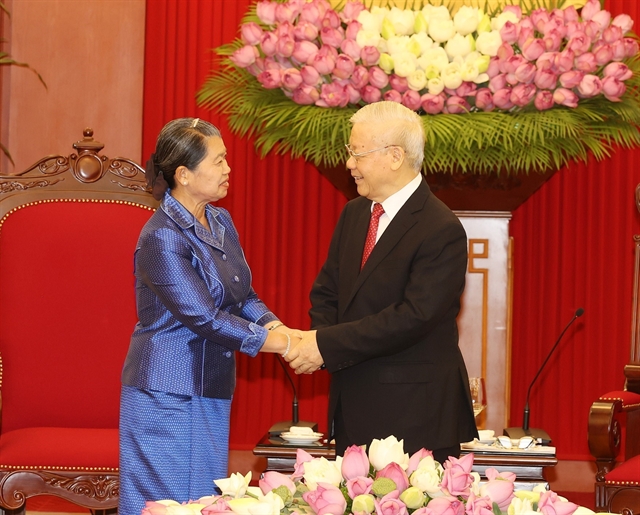 She expressed delight to visit Việt Nam and attended the ceremony held to celebrate the 55th anniversary of the diplomatic relations between the two countries.

She stressed that over the past 55 years, the Party and people of the two countries had always stood side by side. She thanked the Party, State, Army and people of Việt Nam for their support and assistance for Cambodia during its national liberation cause, saving Cambodia’s people from the genocidal threat, as well as during the national construction and development process.

The Cambodian Deputy PM also expressed delight at the all-faceted development of the good neighbourly relationship, traditional friendship, and comprehensive and long-term sustainable cooperation between Cambodia and Việt Nam.

For his part, Party General Secretary Trọng spoke highly of the important meaning of the Việt Nam-Cambodia Friendship Year, particularly the 55th anniversary of diplomatic relations, marking a new page in bilateral relations.

He congratulated Cambodia for gaining important achievements and expressed his belief that the Cambodian People’s Party and people will continue to reap new achievements.

The Party leader expressed his pleasure at the continuous development of the Việt Nam-Cambodia relations and thanked the Party and people of Cambodia for standing side by side and supporting Việt Nam during its revolutionary period.

He also stressed the meaning of the solidarity and mutual support between the parties and peoples of Việt Nam, Laos and Cambodia. He proposed the three parties and three countries continue promoting cooperation toward the orientation set by their leaders.

PM Chính congratulated Cambodia on its achievements gained in recent years, particularly in COVID-19 prevention and control and socio-economic development as well as in assuming the role as 2022 ASEAN Chair.

He expressed delight at the positive development of the two countries. Two-way trade turnover in the first five months of 2022 reached US$5.44 billion, a year-on-year increase of 19 per cent.

Cooperation in the fields of national defence, security, education and training and transport continued to be promoted.

On the basis of treaties and agreements reached, the two sides were actively coordinating to implement the demarcation and planting of landmarks on the land border, with 84 per cent of the line already completed, and talks on the remaining 16 per cent underway.

Cambodian Deputy PM Men Sam An spoke highly of the development of the relations between the two countries and said she would continue to strive to contribute to boosting the friendship between the two nations. — VNS

Vietnamese leaders welcome Cambodian Deputy PM have 562 words, post on vietnamnews.vn at June 24, 2022. This is cached page on Talk Vietnam. If you want remove this page, please contact us.