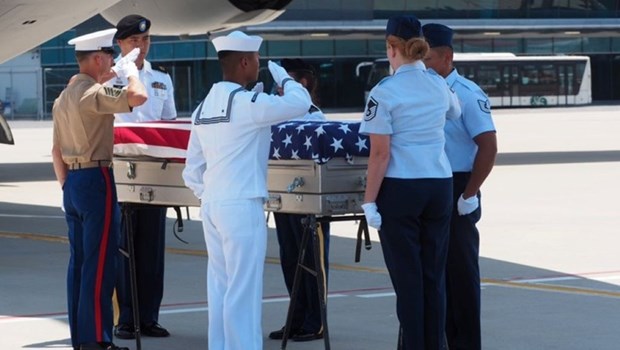 A handover of remains of missing US soldiers is held in Da Nang in September 2019. (Photo: VNA)

Hanoi (VNA) – The Vietnam Office for Seeking Missing Persons (VNOSMP) handed over remains of American soldiers missing in action during the war in Vietnam to the US in a ceremony held at Da Nang International Airport on June 30.

The US side included representatives from the US Embassy in Hanoi and the US Missing in Action (MIA) Office in Hanoi (DET2).

The two sets of remains returned to the US side this time were the results of the two countries' 146th and 147th joint searches from February to June. Examined by both Vietnamese and American forensic specialists in Da Nang, they were found to potentially link to missing US servicemen in Vietnam. They will be sent to Hawaii for further examination.

The search for missing US soldiers’ remains from the war in Vietnam has been an ongoing humanitarian activity jointly conducted by the Vietnamese and US Governments. This was the 158th handover since 1973./.

Vietnam hands over more remains of US soldiers missing in action have 388 words, post on en.vietnamplus.vn at June 30, 2022. This is cached page on Talk Vietnam. If you want remove this page, please contact us.