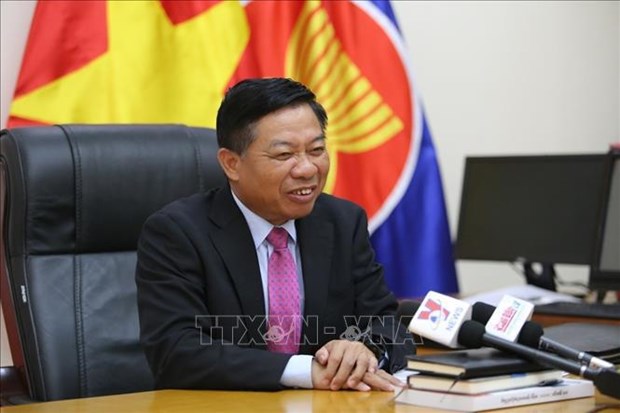 Hanoi (VNA) – With achievements in diplomatic relations over the past 55 years and the determination of Vietnam and Cambodia's Parties, leaders and people, it is believed that the bilateral ties will constantly develop in line with the motto of "good neighbourliness, traditional friendship and comprehensive, sustainable and long-term cooperation", said Vietnamese Ambassador to Cambodia Nguyen Huy Tang.

Tang gave an overview of the outstanding achievements made in Vietnam – Cambodia multifaceted relationship, particularly in politics, defence- security, economy, investment, education-training and border demarcation, over more than five decades during an interview with Vietnam News Agency on the occasion of the 55th anniversary of the two countries' diplomatic ties (June 24, 1967-2022).

Political relations between Vietnam and Cambodia have constantly grown, providing a basis for cooperation in all areas, the diplomat said, adding that both sides' leaders have maintained regular contact, discussions and meetings, both in-person and virtually, to achieve bilateral strategic agreements and seek solutions to existing problems to further boost their partnership.

The Vietnamese and Cambodian Parties, States and people have also provided practical and timely support to help each other fight the COVID-19 pandemic, he noted.

They have also shared information and experience in fighting trans-national crime and made concerted efforts to search and repatriate the remains of Vietnamese volunteer soldiers and experts killed during wartime in Cambodia.

Vietnam and Cambodia have seen remarkable progress in their economic partnership with two-way trade reaching 5.32 billion USD in 2020 and 9.54 billion USD last year. In the first five months of this year, the figure rose by 19 percent year-on-year to 5.44 billion USD.

The two countries can definitely raise bilateral trade to over 10 billion USD this year as targeted, Ambassador Tang said.

Vietnam has topped ASEAN investors and remained among the top five foreign investors globally in Cambodia for years. Vietnam is currently operating 188 projects worth 2.88 billion USD in Cambodia. Many of the Vietnamese projects in Cambodia are very successful, he noted, citing Metfone and the Vietnam Rubber Group’s companies as examples.

He added that the two nations have completed 84 percent of their land border demarcation and marker planting goal.

A host of celebration activities are underway to mark the 55th anniversary of the two countries' diplomatic ties, he said. Cambodian Deputy Prime Minister Men Sam On is on a visit to Vietnam for the anniversary celebration on June 24./.

Vietnam, Cambodia live up to “good neighbourliness” commitments have 579 words, post on en.vietnamplus.vn at June 24, 2022. This is cached page on Talk Vietnam. If you want remove this page, please contact us.