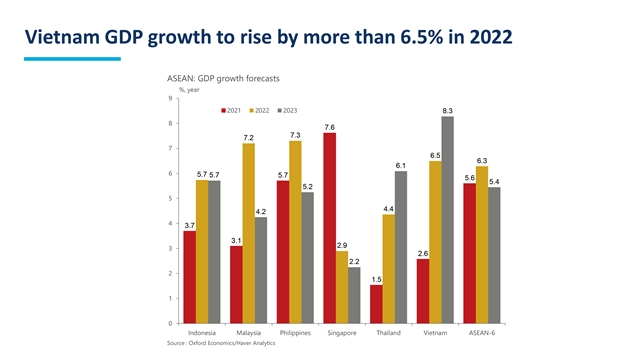 Việt Nam has high regional growth prospects, predicted at more than 6.5 per cent in 2022. — Infographic by Oxford Economics

HÀ NỘI — The economic recovery across the South-East Asian region has been uneven and must now contend with rising external headwinds from outside the region.

Việt Nam is predicted with a high growth prospect in the region, at more than 6.5 per cent in 2022, 0.7 per cent higher than the average growth of 5.8 per cent for the whole region.

This was a key finding from the Economic Forecast presented by the experts at the Institute of Chartered Accountants in England and Wales (ICAEW) Economic Insight Forum Q2.

Việt Nam was able to bounce back relatively quickly in 2021 compared to the rest of the region. With the easing of restrictions from last year's Q4 that carried over to this year's Q1, there has been a significant recovery in its services sector driven by domestic tourism.

With the current endemic phase, there should be a boost on the international tourism front as travellers return to Việt Nam. Realised foreign direct investments inflow this year should also support construction performance and labour and achieve export capacity, which remains healthy.

The ICAEW report said that even though recovery across the Southeast Asian region had been uneven with the Delta COVID variant, GDP for Singapore, Indonesia, Malaysia, the Philippines, and Việt Nam has risen back to pre-pandemic levels – except for Thailand, which is still at 2 per cent below pre-pandemic levels as its tourism industry struggled with travel and mobility restrictions.

It was noted that Việt Nam was not particularly affected by the Delta variant wave and hence did not experience large lockdowns that impacted its economy as much as Malaysia and the Philippines did.

On the other hand, Singapore was able to take advantage of the increase in demand for consumer electronics globally to increase its GDP growth by 7.6 per cent last year. — VNS