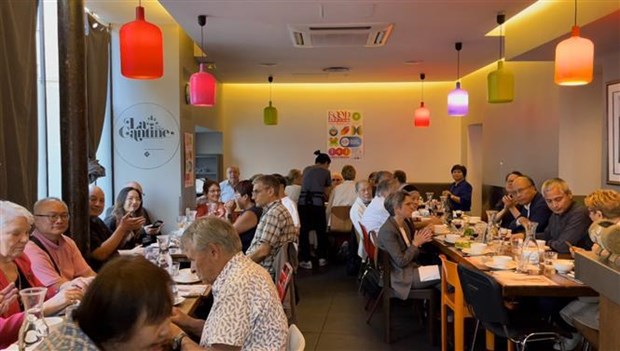 More than 90 people participating in the meal (Photo: VNA)

Paris (VNA) – The committee in support of Tran To Nga who sued US firms for manufacturing the toxic AO defoliant used by US forces during the war in Vietnam on June 24 offered a charitable meal in Paris to raise fund for her lawsuit.

The meal, the third of its kind after those in March and May, was participated by more than 90 people, including Vietnamese Ambassador to France Dinh Toan Thang and MP Sandrine Rousseau of the Europe Écologie les Verts (EELV) – Green Party.

Nga said she was happy and felt touched when seeing a large number of overseas Vietnamese and French friends attending this event.

She stated that this is a great honour and encouragement for her in this arduous and long battle.

In 2014, Nga, who used to be a war correspondent in south Vietnam during wartime, sued the multinational companies, including Monsanto – Bayer, that produced or supplied herbicides for the US during the war in Vietnam.

On May 10, 2021, the Crown Court of Evry city in the suburbs of Paris rejected her lawsuit , saying it did not have jurisdiction to hear the case, a ruling that disappointed the Vietnamese and international public.

However, Nga and her lawyers decided to file an appeal, and the struggle for justice for AO/dioxin victims is still underway.

From 1961 to 1971, the US army sprayed 80 million litres of herbicides which contained about 400kg of dioxin – one of the most toxic substances, on Vietnam. Over the last 60 years, effects of this deadly chemical have still lingered in land, water, and many people's bodies. More than 4.8 million Vietnamese people are suffering from its consequences.

Every year, Vietnam earmarks more than 10 trillion VND (over 440 million USD) from its budget for providing aid and health care for AO/dioxin victims and for assisting the disadvantaged areas severely affected by the herbicides./.

Tran To Nga’s dioxin lawsuit receives encouragement have 577 words, post on en.vietnamplus.vn at June 25, 2022. This is cached page on Talk Vietnam. If you want remove this page, please contact us.