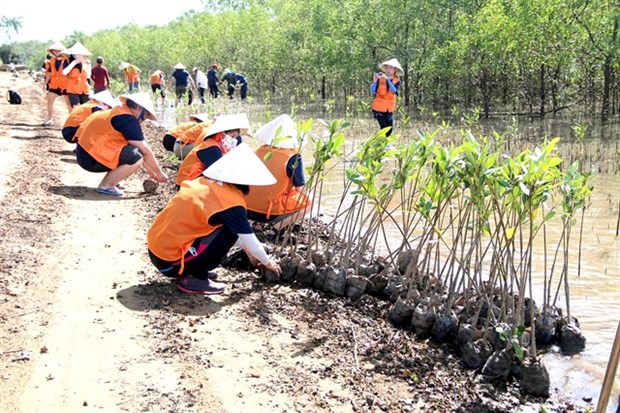 Tra Vinh (VNS/VNA) – The Mekong Delta province of Tra Vinh is growing more forests and strengthening conservation of existing ones.

This is meant to protect the environment, adapt to climate change and improve people's livelihoods, according to the coastal province's Forest Protection Sub-department.

Nguyen Vu Phuong, head of the sub-department, said 200,000 trees would be planted in forests every year.

Tra Vinh is one of the delta's provinces hardest hit by climate change , especially rising sea levels, which have impacted the environment and the lives of people living in coastal areas.

To mitigate the impacts, it has implemented various forest growing programmes in recent years.

The sub-department and other relevant units planted 1,000 mangrove trees in the commune on the first day of the programme.

Le Quang Rang, deputy director of the provincial Department of Agriculture and Rural Development, said more than 360ha of forests were planted in the last five years and another 54ha would be planted this year.

The province has nearly 9,500ha of forests, the sixth largest area among the delta's 12 provinces and Can Tho City, he said.

Mangrove forests have helped protect the province's 65 kilometres of coasts from strong winds, waves and storms.

They are also habitats for aquatic species that provide livelihoods to locals.

He has a 3,000sq.m of farmlands near a mangrove forest where he grows watermelon and peanut, and earns a large income, he said.

The province aims to increase its forest cover rate from 4 percent last year to 4.2 percent by 2025.

To achieve this, the sub-department plans to strengthen dissemination activities to enhance the awareness of local authorities and people about forest management, protection and development.

It has set up nurseries to ensure they have a steady supply of seedlings for planting. One of them is a huge 50ha nursery in Duyen Hai district's Dong Hai commune to produce mangrove seedlings./.

Tra Vinh province plants forests to protect coasts, improve environment have 656 words, post on en.vietnamplus.vn at June 24, 2022. This is cached page on Talk Vietnam. If you want remove this page, please contact us.