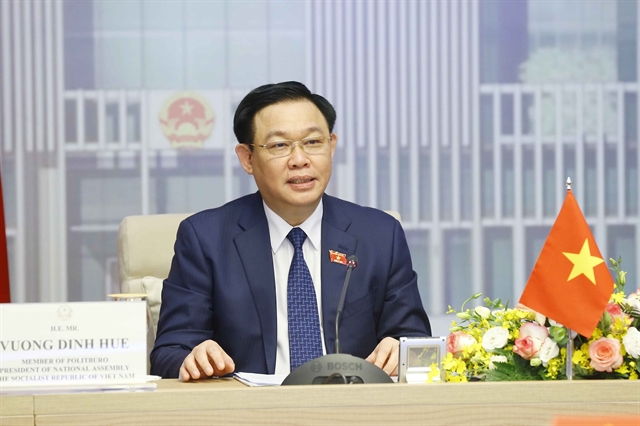 Could you talk about the meaning and purposes of the official visit to Hungary by NA Chairman Vương Đình Huệ?

This is an important visit by a Vietnamese high-ranking leader to deepen the comprehensive partnership and the parliamentarian relations between Việt Nam and Hungary, amid the context the two countries are in a period of economic recovery after the COVID-19 pandemic.

Việt Nam and Hungary have a history of 72 years of friendship and cooperation in many fields, such as education and training, law and justice, culture, sports and people-to-people exchanges.

The two countries established the comprehensive partnership in September 2018, on the occasion of the official visit to Hungary by Party General Secretary Nguyễn Phú Trọng, and have potential in many fields such as trade and investment, agriculture, healthcare, tourism and labour.

The relations between the National Assemblies of Việt Nam and Hungary are developing well. The two sides have actively exchanged delegations at all levels. In July, 2021, NA Chairman Huệ held an online talk with Chairman of Hungarian NA László Kövér.

The two sides have cooperated closely and effectively and supported each other at multilateral parliamentarian forums.

The upcoming visit to Hungary by NA Chairman Huệ is an opportunity for high-ranking leaders of the two countries to reconfirm their political commitments of attaching importance to and promoting the bilateral relations, contributing to economic recovery and sustainable development after the COVID-19 pandemic, as well as enhancing cooperation in global issues such as climate change.

What are the highlights of the bilateral relations between Việt Nam and Hungary?

Hungary has been very active in pushing for the ratification of the EU-Vietnam Free Trade Agreement. It was also the first among EU member states to ratify the EU-Vietnam Investment Protection Agreement (EVIPA).

Regarding the economy, two-way trade totalled US$1.1 billion last year with an improved balance of trade, despite the impacts of COVID-19.

Labour remains a potential field of cooperation between the two countries. More than 1,000 Vietnamese workers come to Hungary to work since 2018.

Hungary considers Việt Nam a priority partner in its international assistance policy. A number of projects using Official Development Assistance (ODA) provided by Hungary have brought socio-economic efficiency to Việt Nam, such as a project on building a population management system, a project to supply water for people in central Quảng Bình Province’s Quảng Trạch District. The two sides are actively speeding up the construction of a cancer hospital in the Mekong Delta city of Cần Thơ using ODA from Hungary.

Education and training is a field of traditional cooperation between the two countries.

The two sides signed an agreement on cooperation in culture, sports and tourism in 2013 and have actively implemented many cultural cooperation activities.

Over the past 20 years, Hungary has had many cooperation programmes and shared experiences with Việt Nam in the field of justice and law. Hungary has recently supported Việt Nam in training human resources for the justice sector.

In the context of the COVID-19 pandemic, the two countries demonstrated their friendship and solidarity. Việt Nam presented face masks to Hungary while Hungary donated 256,000 COVID-19 vaccine doses and 100,000 rapid test kits to help Việt Nam battle the pandemic. The country also transferred 400,000 vaccine doses to Việt Nam under a non-profit mechanism.

What are the key contents of the official visit to Hungary by NA Chairman Huệ?

The visit is aimed at demonstrating the political commitment to promoting the comprehensive partnership between Việt Nam and Hungary more deeply and effectively and deepening the relations between the two parliaments.

As scheduled, the chairmen of the NAs of Việt Nam and Hungary will sign an agreement to enhance regular and practical cooperation between the two parliaments in place the old one inked in June 2008, focusing on enhancing exchanges of delegations and meetings between leaders and agencies of the NAs; organising conferences and dialogues on issues of common concern within the framework of official visits by leaders of the two parliaments, exchanging information about law building activities and bilateral and multilateral international treaties of which they are both members; and promoting meeting, consultancy, coordination and mutual support at multilateral parliamentarian forums.

The two chairmen will attend a dialogue between the two parliaments on completing a legal framework for reducing greenhouse gas emissions, renewable energy and a green economy.

The two countries also expect to boost bilateral ties in the fields of economy, trade and investment, tapping opportunities from EVFTA and striving to increase the two-way trade turnover by 10 per cent annually.

Chairman Huệ is scheduled to attend a dialogue about Vietnam-Hungary Economy, Trade and Investment; and meet Vietnamese entrepreneurs in Europe.

The two sides will continue to boost cooperation in traditional fields such as education, justice and law, national defence, ODA, labour and tourism. — VNS

Top legislator’s visit to Hungary expected to deepen bilateral ties have 1146 words, post on vietnamnews.vn at June 24, 2022. This is cached page on Talk Vietnam. If you want remove this page, please contact us.