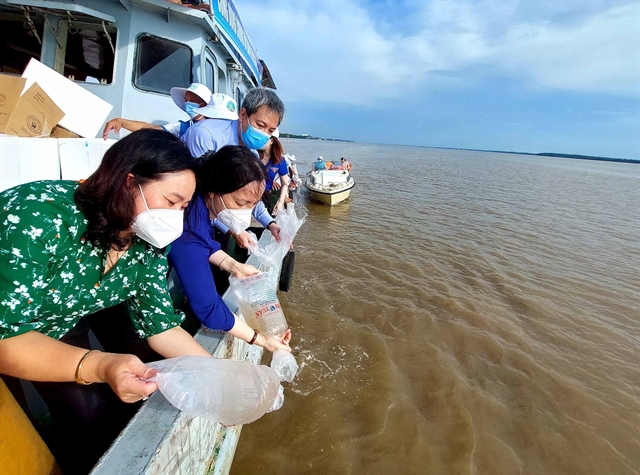 SÓC TRĂNG – The Cửu Long (Mekong) Delta province of Sóc Trăng has taken a number of measures to protect its natural fisheries resources to ensure sustainable livelihoods for its people.

Its coastline of more than 72km includes large mudflats that are habitats for clams and other aquatic species.

In Cù Lao Dung District and Vĩnh Châu Town, mudflats contain around 140 tonnes of clam seeds, according to the province Fisheries Sub-department.

They have high value and a fishing boat can earn around VNĐ1 million (US$43) a day from catching the bivalve molluscs, but their quantity has declined significantly in recent years due to several reasons including overfishing.

Đỗ Văn Thừa, deputy head of the Cù Lao Dung Bureau of Agriculture and Rural Development, said the quantity of clams caught now was only equal to 80 per cent of the pre-2010 figure.

The major reasons were overfishing and changes in the water flow of the Mekong River, he said.

Juveniles can normally be found in mudflats between the third and eighth lunar months, attracting fishing boats even from neighbouring provinces.

This kind of overfishing has both affected fishery resources and young mangrove forests, according to the sub-department.

To prevent it, it collaborates with military and forest protection authorities to conduct random inspections.

It has strengthened advocacy to enhance public awareness of the importance of fishing and protecting fishery resources.

Fisherman Thái Văn Đến in Trần Đề District's Trần Đề Town said he only caught large fish and kept away from species whose catching was prohibited.

Fishermen warned each other against violating regulations that seek to protect fishery resources to ensure sustainability, he said.

It releases juveniles of various species into the sea to regenerate resources.

In April, for instance, it released 4.3 million young shrimp and crab in Trần Đề District. – VNS

Sóc Trăng Province strengthens protection of fisheries resources have 478 words, post on vietnamnews.vn at June 25, 2022. This is cached page on Talk Vietnam. If you want remove this page, please contact us.