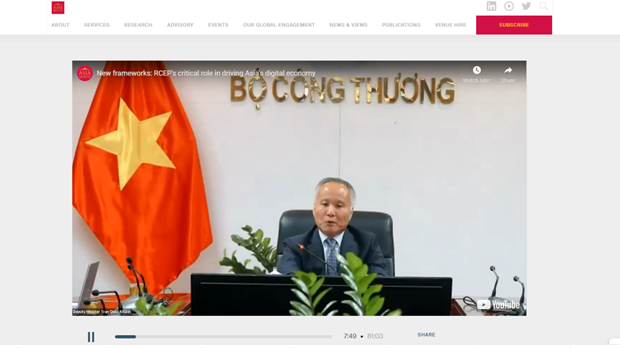 London (VNA) – The implementation of the Regional Comprehensive Economic Partnership (RCEP)'s e-commerce commitments will help establish a large e-commerce space based on internationally accepted standards with the participation of big economies who are advanced in e-commerce, according to Deputy Minister of Industry and Trade Tran Quoc Khanh.

The webinar brought together governmental representatives, senior business leaders, economists and scholars across Asia Pacific to discuss how the RCEP could play a critical role in driving the region's digital economy.

Khanh highlighted RCEP as the largest free trade agreement (FTA) in the world so far and the most comprehensive that ASEAN has ever signed. It is also the first between ASEAN and external partners with a standalone chapter on e-commerce, he added.

The RCEP shows significant efforts by ASEAN and its partners in promoting e-commerce in the region, he said.

The Vietnamese official held that the growth of e-commerce – one of the components of a digital economy – in RCEP economies has been elevated by the widespread outbreak of COVID-19. "Total e-commerce revenue of the whole ASEAN in 2021 increased by 62 percent as compared to the year of 2020."

Revenue from e-commerce in five ASEAN member states who are signatories to RCEP surged 15 percent, he said.

He recommended to maintain the current practice of not imposing customs duties on electronic transactions between countries and reducing barriers to paperless transactions while ensuring national security and legitimate public policy objectives.

Additionally, it is crucial to establish mechanism to address issues related to the development among countries through consultation and dialogue, he emphasised.

Bringing together 15 signatories across Asia Pacific, RCEP includes enhanced provisions in areas such as cross-border data flows, online consumer protection, and several aspects of digital trade. It has the potential to consolidate and deepen the digital trade environment for businesses and SMEs throughout Asia./.

RCEP commitments help establish large e-commerce space in Asia: Deputy Minister have 652 words, post on en.vietnamplus.vn at June 23, 2022. This is cached page on Talk Vietnam. If you want remove this page, please contact us.