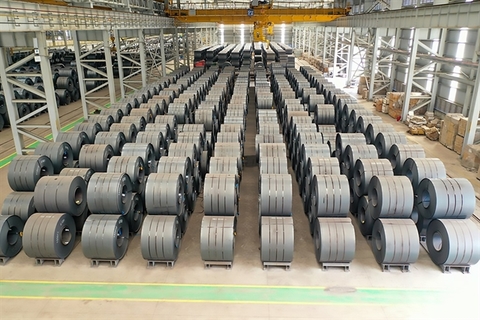 Inside a factory of Hoa Phat Group (HPG). HPG increased 5 per cent on Monday. — VNA/VNS Photo

The benchmark last week registered a weekly decrease of 2.6 per cent.

Nearly 527 million shares were traded on the southern bourse, equivalent to VND12.3 trillion (US$529 million).

Market breadth was positive with 116 losers and 340 gainers.

Vietcombank (VCB) was the only decliner in the group.

In the basket, 26 stocks climbed, and four dropped.

On a sector basis, 23 out of 25 sector indices on the stock market gained ground, including insurance, oil and gas, banking, wholesale, construction, rubber production, IT and logistics, agriculture, real estate, food and beverage, construction materials, securities, and healthcare.

The northern market index had dropped 1.5 per cent last week.

Some 49.4 million shares were traded on the northern exchange, worth VND962 billion. — VNS

Market surpasses 1,200-point mark thanks to steel, banking stocks have 529 words, post on bizhub.vn at June 27, 2022. This is cached page on Talk Vietnam. If you want remove this page, please contact us.