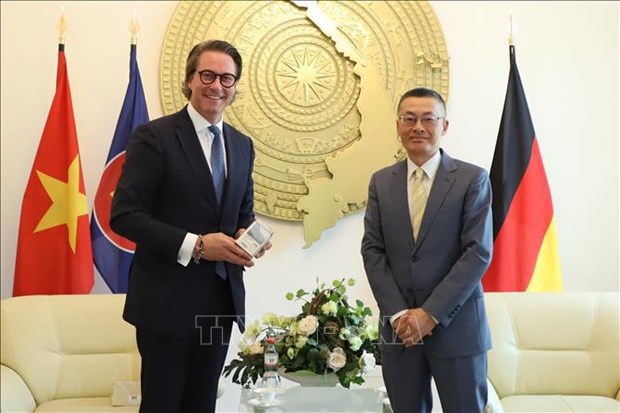 Hanoi (VNA) – Vietnamese Ambassador to Germany Vu Quang Minh on June 22 had a working session with Parliamentarian Andreas Scheuer, President of the Asian Bridge Initiative programme, on prospects for strengthening cooperation between Vietnam and the European Union (EU) in general, and Germany in particular.

The two sides agreed that there remains large room to develop bilateral cooperation between Vietnam and Germany , especially in the economic field.

They emphasised the importance of strengthening the exchange of all-level delegations, including business delegations, in order to bring information about the potential of Vietnam and Vietnamese businesses closer to partners in Germany and Europe in general.

Scheuer, who is also former German Federal Minister of Transport and Digital Infrastructure, affirmed that the executive board of the programme wishes to further promote the Germany-Vietnam cooperation in the areas of economy, trade, investment, labour, cultural exchange, knowledge and technology transfer, and infrastructure, including transport infrastructure.

He expressed his impression on the rapid development and the young, enthusiastic and talented workforce of Vietnam, saying that he is willing to act as a bridge to promote a bilateral cooperation framework in the field of labour, considering Vietnam an important partner in the Young Leaders programme to be launched by the Asian bridge initiative programme.

With a network of reputable experts, large enterprises as well as extensive connections with diplomatic corps, the Asian bridge initiative programme is expected to play an important role in creating a catalyst for the Eurasian cooperation in general and between Germany and Vietnam in particular, he said.

Ambassador Minh took the occasion to invite Scheuer and experts and businesses representing the programme to visit Vietnam to further promote cooperation between the two sides./.

Large room for Vietnam, Germany to boost cooperation: parliamentarian have 414 words, post on en.vietnamplus.vn at June 23, 2022. This is cached page on Talk Vietnam. If you want remove this page, please contact us.