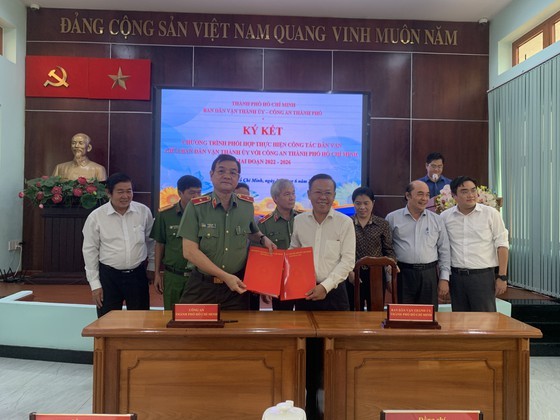 Speaking at the conference, Head of the Ho Chi Minh City Party Committee’s Commission for Mass Mobilization Nguyen Huu Hiep highly appreciated the results of the two units in the past five years, contributing to enhancing the quality and efficiency works of the political system. Specifically, the city police received over 63,730 valuable information sources from residents. Moreover, residents accompanied the police forces to handle 12,930 violation cases related to security and order, and arrest over 13,160 violators.

Installation of surveillance cameras in 22 districts and Thu Duc City to monitor security and order situations in residential areas were also deployed during the period.

At the conference, Director of the Ho Chi Minh City Public Security Department Major General Le Hong Nam said that the unit will work closely with the Ho Chi Minh City Party Committee’s Commission for Mass Mobilization to apply many initiatives and the best practices in the terms of propaganda and mobilization of people to participate in voluntarily denouncing, arresting criminals, handing over weapons, explosives and so on.

HCMC Commission for Mass Mobilization collaborates with city police have 453 words, post on www.sggpnews.org.vn at June 23, 2022. This is cached page on Talk Vietnam. If you want remove this page, please contact us.