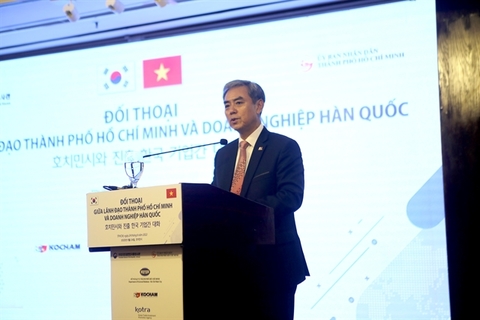 The chairman of the Korean Chamber of Commerce and Industry in Viet Nam, Shon Young Il, has called on HCM City authorities to help Korean firms resolve difficulties they face in investing and operating in the city.

Shon was speaking at a meeting between Korean business executives and city officials late last week organised by the People's Committee and Korean consulate general in the city.

The meeting was held to review the performance of Korean enterprises and for the city officials to listen to their problems and offered solutions.

The problems discussed included some related to labour, with Shon saying a number of businesses complained about difficulties in obtaining work permits for foreign workers.

Reducing costs, including salaries, is an imperative part of doing business, and so companies reduce the hiring of foreign personnel even without the Government calling for it, he said.

He said another problem when hiring personnel is that Vietnamese authorities consider the compatibility between university degrees and jobs when issuing labour licences.

For instance, if a company recruits a business administration graduate for its human resources department, a work permit would be refused, he said.

"This is inappropriate in the current context when not everyone is properly trained and there is co-operation between industries. So the focus on certification should be avoided."

The imposition of seaport infrastructure fees was also brought up by many of the Korean firms.

Since April, all container vehicles entering and leaving Cat Lai Port have to pay an additional fee for using infrastructure, and the payment has to be made every time they enter.

The Korean executives called it an inefficient way because it takes a lot of time and personnel and suggested creating a monthly payment system and improving the electronic toll collection system.

They also said the fees have to be reduced considering the high logistics costs for businesses due to the COVID-19 pandemic.

A representative of Korea Financial Telecommunication and Clearing (KFTC) Viet Nam said the fees are too high if their purpose is to fund construction and repair of roads damaged by vehicles.

It is not even reasonable to charge the fees while the Government's policy is to encourage water transport, he said.

"We would like to propose waiver of the fee for using the port when goods are transported by sea from other provinces, and apply the basic infrastructure fee for goods entering and leaving the port from bonded warehouses."

Answering the problems on labour procedures, deputy director of the city Department of Labour, Invalids and Social Affairs Nguyen Van Lam said businesses that want to recruit foreign workers must submit a labour use plan.

Applications for work permits are normally processed the same day or next morning, and nothing takes more than five days, he said.

In the case of other shortcomings raised in this regard, the department would instruct competent authorities to respond at the earliest, he added.

The comments and recommendations by the businesses were noted and will be forwarded to the Government.

Phan Van Mai, chairman of the city People's Committee, said after two years of being affected by the pandemic the city is recovering but also faces new challenges.

"The city's economic recovery is significantly thanks to the business community, including Korean businesses."

The city always supports foreign enterprises and ensures they could make safe, effective and long-term investments, he said.

The dialogue was an opportunity for the two sides to exchange, share, listen, and absorb ideas and suggestions, thereby building trust and cooperation to together overcome difficulties and grow, he said.

He instructed the Department of Foreign Affairs and other agencies to give specific answers to the issues raised by the businesses, and said those beyond the city's authority would be passed on to the Government and feedback obtained as soon as possible.

According to a report by the Korea Trade-Investment Promotion Agency, manufacturing is the most attractive sector for Korean investors in Viet Nam.

In the last 10 years, Korean investment in the sector has been worth US$23 trillion. — VNS

HCM City promises to ease problems faced by Korean investors have 955 words, post on bizhub.vn at June 27, 2022. This is cached page on Talk Vietnam. If you want remove this page, please contact us.