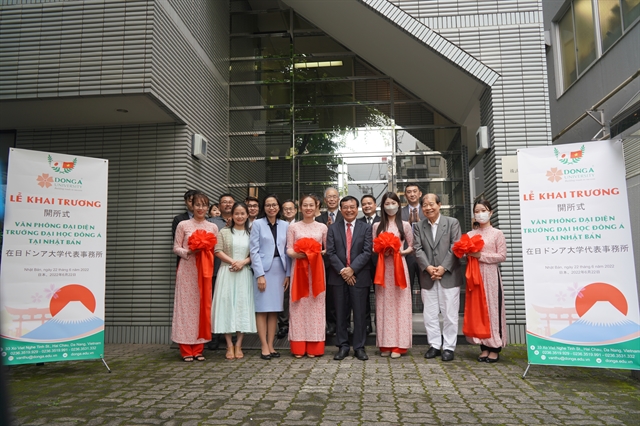 Officials from the Việt Nam embassy in Japan and Đông Á University join a ribbon-cutting ceremony of the representative office of the university in Tokyo, Japan. Photo courtesy of Phương Chi

Chairman of the university council Lương Minh Sâm said the university had appointed the Japanese professor Yasuhiro Yamada as the representative in Tokyo, and the office will be a rendezvous for more than 300 students from the University in Japan and other Vietnamese students and workers.

Sâm said the debut of the representative office in Japan was part of the strategic education programme in supplying high-quality human resources for both Vietnamese and Japanese markets.

He said the appointment professor Yamada, who had experience as chairman of the Japan External Trade Organisation (JETRO) offices in Hà Nội, Paris, and the Economic Research Institute for ASEAN and East Asia (ERIA) in Cambodia, Myanmar, Laos and Việt Nam, would help build closer links among the university and universities, institutions, business community and people in Japan for more effective co-operations in different fields.

It would also offer support and consultancy for Vietnamese students – who are working and studying in Japan – vocational education and job recruitment, as well as educational opportunities.

She said the introduction of the representative office of Đông Á University in Tokyo would play as a milestone in the celebration of the 50th anniversary of Japan-Việt Nam diplomatic ties.

Hương also highly appreciated the cooperation from the university with 82 businesses and eight cities in Japan over the past years, and the sending of 300 Vietnamese students to Japan was an endeavour in building long-term sustainable manpower education and cooperation. 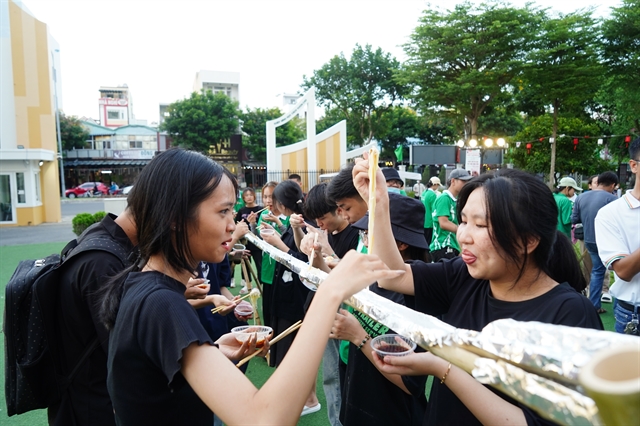 The Đà Nẵng-based university had sent 300 nursing and hospitality students to serve at medical centres, health care and shopping centres in Japan since 2017.

It said a group of 300 students qualified for recruitment by Japanese companies in the Japanese-Vietnamese Culture Exchange and Jobs Enrollment Day in Đà Nẵng last week.

The university plans to send 500 students from 15 industries including hospitality, hotel, restaurant, business management, information technology, control and automation, automobile engineering, and electronics to work in Japan from 2022-24.

Đông Á University is the only education centre in central Việt Nam supplying human resources for the Japanese labour market. The university centre has been educating 9,000 students, including 2,000 studying the Japanese language, in 35 industries.

Japan promoted its Consulate Office in Đà Nẵng City to General Consulate just a year after it was founded, to boost ties between Japan and the central city earlier this year.

Head of the Japanese General Consulate, Yakabe Yoshinori said the relationship between Japan and Đà Nẵng would be further strengthened, and the number of Japanese tourists and investors to Đà Nẵng would increase in the post-COVID-19 time.

He said high-quality human resources training in the Japanese language would play a key role in boosting different exchanges between Japan and Việt Nam, and the General Consulate would promote the ties with Đông Á University to contribute to Japanese-Vietnamese diplomatic ties.

Osaka was the first province in Japan to receive students from central Việt Nam for one-year at-work training and internship courses at hospitals from March, after a deadlock due to COVID-19 in 2020-21.

The Air route from Narita, Japan to Đà Nẵng would resume in the third quarter of 2022. VNS

Đà Nẵng university opens office in Japan have 873 words, post on vietnamnews.vn at June 24, 2022. This is cached page on Talk Vietnam. If you want remove this page, please contact us.