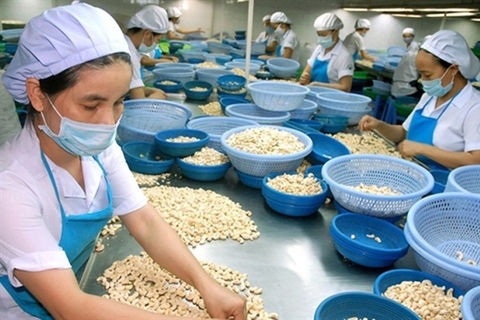 Cashew exports reduced both in volume and value in the first five months of the year. — Photo congthuong.vn

Viet Nam's cashew exports reduced significantly in both volume and value in the first months of the year, exports for the entire year are forecast to be lower than last year, according to the Viet Nam Cashew Association (Vinacas).

Speaking at a meeting to review the industry's performance in the first half of the year and set plans for the latter half, Tran Van Hiep, Vinacas' deputy chairman, said cashew exports in the first five months fell by 7.81 per cent in volume and 6.81 per cent in value to 206,111 tonnes and US$1.19 billion, respectively.

Enterprises imported about 968,000 tonnes of raw cashew nuts from abroad worth nearly $1.4 billion, down 35.24 per cent in volume and 37.84 per cent in value in the first five months. But the price of raw cashews imported from Africa has increased by 15-20 per cent compared to the beginning of the year, Hiep said.

According to Hiep, "local cashew importers and processors have reduced buying raw materials due to many reasons, with a uneven increase in the price of imported raw cashew nuts and export prices being the main reason. The price of raw cashew nuts stand at a very high level, the processing cost for export is also high, while cashew nut export prices are low. It is difficult for processing plants to break even, not to mention get profits."

Developments in the world, such as the Russia-Ukraine conflict and global inflation, are affecting the consumption and export of cashew nuts, he said.

The cashew industry exported cashews to 104 countries and territories last year, with Russia being 11th largest buyer of Vietnamese cashews, accounting for 1.63 per cent of the industry's total export value.

Since the beginning of the Russia-Ukrainian war, Western countries have excluded Russia from the SWIFT payment system, which has greatly affected Viet Nam's cashew exports to that market due to difficulties in payment.

On the other hand, inflation in the US and Europe is spreading all over the world, pushing prices of many items higher, so people are spending more money for essential needs, and reducing spending for unessential items such as cashew nuts.

China, one of Viet Nam's major cashew nut markets, still maintains a "Zero COVID" policy, causing difficulties for the export of cashew nuts and other agricultural products to the market, he added.

“Exports in 2022 will continue to face difficulties because shipping rates are still high compared to before the COVID-19 pandemic. Meanwhile, the increase in cashew nut export prices is lower than the increase of raw cashew nut prices, factories therefore cannot balance processing costs and export prices. So cashew nut export volume is forecast to decrease in the coming months, possibly until the end of 2022," he said.

Earlier this year, the Ministry of Agriculture and Rural Development assigned the cashew industry an export target of $3.8 billion for this year, an increase of $200 million from last year.

"But with the current context, Vinacas has proposed that the ministry lower the full-year export target to $3.2 billion, down $400 million compared to 2021," Hiep said.

Ta Quang Huyen, chairman of Binh Phuoc Province-based Hoang Son 1 Company and Vinacas' deputy chairman, said: "Cashew export in the first half of the year faced difficulties due to lower demand than that in the previous year.”

With rising competition from emerging exporters in African countries, Tran Huu Hau, Vinacas' general secretary, suggested that local cashew processors and exporters pay more attention on ensuring the best quality and delivery on schedule to keep the industry's reputation and customers' trust, while also increasing the ratio of processed products to add value.

Vinacas Chairman Pham Van Cong said in the context of many unpredictable fluctuations in the global market, many cases of fraud and export disputes have happened. Enterprises must pay attention to the detailed terms in the export contract, export documents, form of payment, and check buyers' information to see whether they are reliable. — VNS

Cashew exports to slow in 2022 amid global inflation, Russia sanctions have 967 words, post on bizhub.vn at June 27, 2022. This is cached page on Talk Vietnam. If you want remove this page, please contact us.