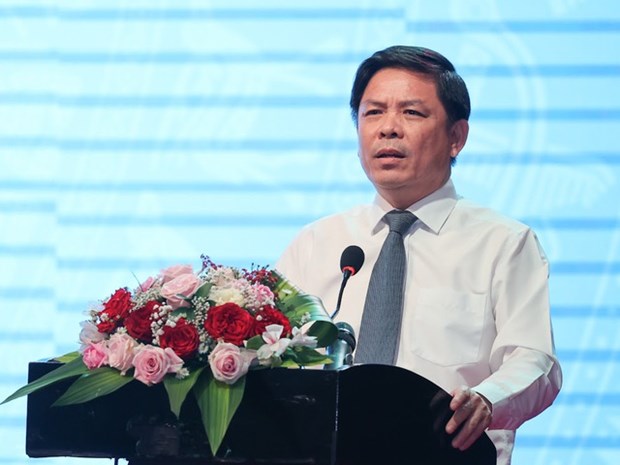 Minister of Transport Nguyen Van The speaks at the conference. (Photo baochinhphu.vn)

Hanoi (VNS/VNA) – Minister of Transport Nguyen Van The has confirmed that around 86 trillion VND from the State budget will be invested in developing an expressway system for the Mekong Delta region.

He made the statement while presenting a plan on transport infrastructure development investment for the Mekong Delta region at the Conference on Promulgation of the Mekong Delta Regional Master Plan and Investment Promotion for the 2021-30 Period, which opened on June 21 in Can Tho City.

The whole region at present has only 90km of expressways, in addition to another 30km under construction.

During this term, investment in an additional 400km of expressway in the region will be carried out, including the construction of a main axis connecting Ho Chi Minh City with Mekong Delta’s Can Tho City and connecting Can Tho City with southernmost Ca Mau province, according to the minister.

Another important highway will connect An Thu in Cao Lanh district in Dong Thap province with Rach Gia city in Kien Giang province.

The end of the expressway system will connect with Tran De port in Soc Trang province.

Under the plan, ships of up to 10,000 tonnes will be able to arrive in Can Tho and some other ports. The Tran De deep water port in Soc Trang, which is considered the main gateway to the Mekong Delta region, will be capable of accommodating ships of 80,000-100,000 tonnes.

Regarding aviation, apart from Can Tho International Airport, the ministry is studying to upgrade three airports, including Phu Quoc, Ca Mau and Rach Gia.

“With that expressway system together with the Tran De port and Can Tho International Airport, we believe that the Mekong Delta region will have favourable conditions for economic development. Domestic and foreign investors can come to the region to develop industrial zones,” Minister The said.

Investment will also be poured into developing maritime and waterway transport for the region.

The ministry is studying to report to the Government a plan to build a railway connecting HCM City and Can Tho city./.

86 trillion VND earmarked for transport infrastructure in Mekong Delta have 508 words, post on en.vietnamplus.vn at June 22, 2022. This is cached page on Talk Vietnam. If you want remove this page, please contact us.