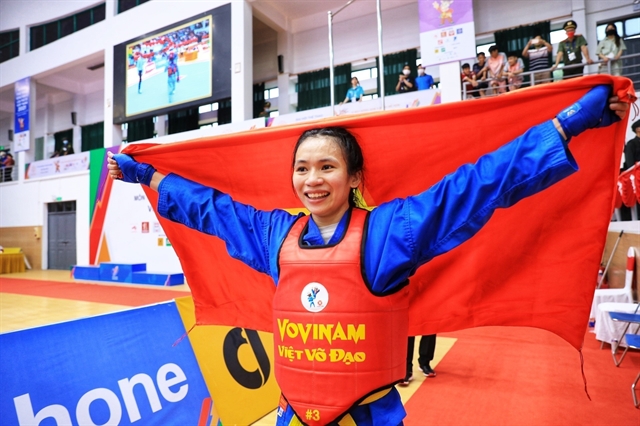 HÀ NỘI — Việt Nam’s vovinam proved their strength at the SEA Games 31 as the team topped the rankings after the final day of competition on May 22.

The Vietnamese team won a total of six gold, six silver and two bronze medals to take the lead.

Lê Thị Hiền brought home the only gold medal on May 22 in the women’s 60kg event. In the qualifying round, the central province of Thanh Hóa-born player overcame Pech Chomno of Cambodia, and then defeated Zephania Ngaa Paga of the Philippines in the semi-finals.

The final match between Hiền and Kesinee Tabtrai of Thailand was dramatic and fierce. With better skills and experience, Hiền won 5-2.

Head coach of the national vovinam team, Nguyễn Tấn Thịnh, said that the big success that vovinam gained at the Games 31 was to widely promote its image to the public and international friends. Vovinam is now being received more and more actively and widely.

This is a favourable premise for vovinam to continue to develop. Vovinam has set a goal of mobilising all 11 countries in the region to compete at the SEA Games 32 held in Cambodia in 2023. There are four countries not participating in this sport at the Games 31, Singapore, Brunei, Malaysia and Timor Leste.

According to Thịnh, the matches at this year’s Games had high professional quality, and most delegations were well prepared and showed professional progress.

In addition, the enthusiastic cheering of the audience at Sóc Sơn Gymnasium in Hà Nội was an important factor in helping martial artists engage more competitively.

Vietnamese vovinam tops team rankings have 477 words, post on vietnamnews.vn at May 22, 2022. This is cached page on Talk Vietnam. If you want remove this page, please contact us.