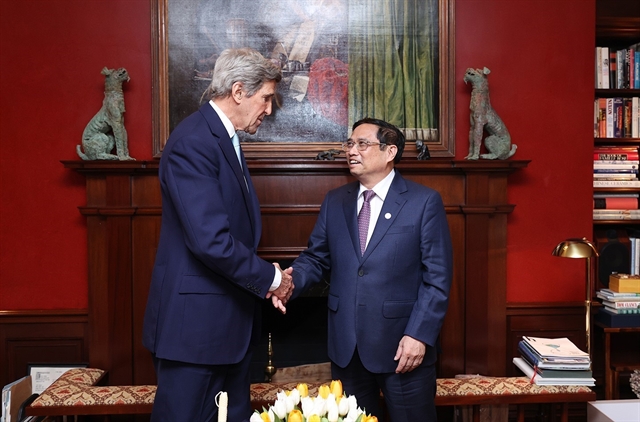 Prime Minister Phạm Minh Chính has a meeting with US Special Presidential Envoy for Climate John Kerry in Boston on May 14 (US time). — VNA/VNS Photo Dương Giang

HÀ NỘI — Prime Minister Phạm Minh Chính met with US Special Presidential Envoy for Climate John Kerry in Boston on May 14 (local time) as part of his working trip to the US.

PM Chính highlighted Kerry's heartfelt sentiments towards the country and people of Việt Nam, as well as his responsibility and enduring contributions to Việt Nam-US relations over the past years.

He also praised Kerry for his role in building the two-Party consensus in the US in supporting the relationship with Việt Nam, especially the settlement of war consequences – part of the process of reconciliation and trust-building between the people of the two countries.

Việt Nam consistently pursues a foreign policy of independence, self-reliance, peace, friendship, cooperation, development, multilateralisation and diversification of relations, and being a good friend and a reliable partner of countries worldwide, and an active, responsible member of the international community, the PM affirmed.

During the process, Việt Nam always considers the US a leading important partner, and wants to work together with the US to promote bilateral ties on the basis of respect for each other's political institutions and in a stable, effective and substantive manner, for peace, stability, cooperation and development in the region and the world, he continued.

PM Chính also appreciated the US' policy of supporting a strong, independent and prosperous Việt Nam.

He told Kerry that during the three-day stay in Washington DC, he and the Vietnamese high-ranking delegation attended the ASEAN-US Special Summit and held practical working sessions with President Joe Biden and senior officials of the US administration and Congress, representatives from Vietnamese and US businesses, experts and scholars.

The COVID-19 pandemic has been brought under control in Việt Nam, partially thanks to vaccines provided by international friends, including the US, the PM said, noting that at the ASEAN-US Special Summit, he suggested the US support the ten-member bloc in assessing post-pandemic impacts, covering people's health and spirit.

For his part, Kerry reiterated the US' consistent view of attaching importance to its comprehensive partnership with Việt Nam and supporting the country's proactive and practical role in the region, and in responding to global issues, including climate change.

Expressing his special sentiments towards and impression on the country and people of Việt Nam, Kerry promised that in any position, he will strongly back and work to promote the Việt Nam-US relations.

The envoy also affirmed the US President's resolve to boost global efforts to prevent rising global temperatures in the next five years.

Kerry said when he was Secretary of State, he paid due attention to cooperation in climate change response and energy transition in Việt Nam, and had made visits to the country to discuss this issue.

In this regard, PM Chính said Việt Nam has seen climate change response as a key, urgent matter that offers both challenges and opportunities for the country to shift toward a green, sustainable growth model.

Though being a developing nation, Việt Nam has joined commitments by developed countries to cutting gas emissions, he said, stressing that these efforts need great support from international partners in the principle of equality and justice, including the granting of preferential credit loans with streamlined administrative procedures.

Lauding the US administration's efforts to promote global efforts in climate change response, PM Chính suggested the US continue its coordination with and assistance for Việt Nam in terms of resources and finance, especially preferential loans, infrastructure, technology and personnel training.

The Vietnamese Government welcomes the engagement of enterprises under the public-private partnership (PPP) and creates the best possible conditions for foreign investors to cooperate with Vietnamese ministries, agencies and businesses in energy transition, he said.

Việt Nam prefers any method of energy transition and reduction of gas emissions that would benefit businesses and people most, he emphasised.

Kerry said he was impressed by Việt Nam's commitments at the 26th United Nations Climate Change Conference of the Parties (COP26), as well as its approach to energy transition and climate change response, and believed that the international community also supports the country in the process with many financial sources.

He stressed that the US government and he himself will further coordinate with Vietnamese ministries and agencies, and stand ready to provide assistance as much as possible to help the country develop renewable energy, reduce gas emissions and consolidate its infrastructure in a sustainable way.

Many major enterprises in the world and in the US are interested in and willing to invest in and join the energy transition in Việt Nam, he noted, suggesting the country make the best use of this opportunity. — VNS

US climate envoy Kerry pledges to assist Việt Nam with energy transition, climate change have 1093 words, post on vietnamnews.vn at May 16, 2022. This is cached page on Talk Vietnam. If you want remove this page, please contact us.