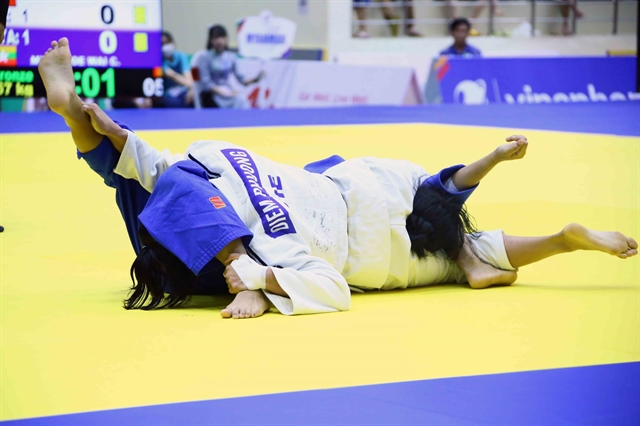 Nguyễn Ngọc Diễm Phương (in white) competes with Myat Neo Wai Chu of Myanmar in the mixed event at the SEA Games 31 on May 22. VNA/VNS Photo Quang Quyết

HÀ NỘI — The Thai judokas brought home the gold medal in the mixed event on May 22.

The event was held at Hoài Đức Gymnasium in Hà Nội.

In the final, Thailand competed with Indonesia with six pairs of athletes in six weight classes. Thailand defeated Indonesia 4-2 to take the gold.

Although it rained heavily, many fans came to the gymnasium to cheer for the martial artists.

After five days of competition, Việt Nam topped the team's rankings with nine gold, one silver and three bronze medals.

Head Coach of the Vietnamese judo team Nguyễn Duy Khanh expressed his satisfaction with the efforts and results of the Vietnamese team. After the SEA Games, the athletes will prepare for the Paris 2024 Olympic qualifiers.

Thai judokas take top spot in mixed event have 425 words, post on vietnamnews.vn at May 22, 2022. This is cached page on Talk Vietnam. If you want remove this page, please contact us.