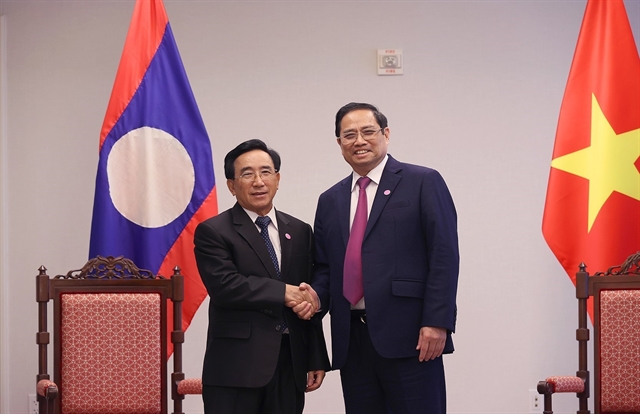 WASHINGTON — Vietnamese Prime Minister Phạm Minh Chính met with his Lao counterpart Phankham Viphavanh in Washington DC on May 13 afternoon (US time) as part of his trip to the US.

The Vietnamese PM conveyed the regards of Party General Secretary Nguyễn Phú Trọng, President Nguyễn Xuân Phúc, and Chairman of the National Assembly Vương Đình Huệ to the Lao PM and other Party and State leaders of Laos.

He congratulated Laos on its results in the fight against COVID-19 and reopening, highly valuing the two countries' sound cooperation in bilateral frameworks and at regional and international forums.

The Lao PM spoke highly of Việt Nam's recent achievements, especially in bringing the pandemic under control and promptly reopening its borders for socio-economic, and thanked Việt Nam for its cooperation and support over the years.

The two PMs rejoiced at the sound development of the Việt Nam-Laos great friendship, special solidarity and comprehensive cooperation.

Since the start of 2022, the countries have arranged exchanges of delegations at all levels, notably an official visit to Việt Nam by the Lao PM in January.

They have collaborated to ensure the effective implementation of high-level agreements and those adopted at the 44th meeting of the Inter-Governmental Committee chaired by the two PMs in the Vietnamese capital earlier this year.

Two-way trade hit US$403.6 million in the first quarter of 2022, posting a year-on-year surge of 19.22 per cent. Cooperation in national defence-security, education-training, transport and energy has been promoted.

The PMs agreed to continue collaboration to carry out agreements between the Parties and States efficiently; maintain delegation exchanges and regular meetings of high-ranking officials; step up key cooperation projects; and join hands for activities in the Việt Nam – Laos Solidarity and Friendship Year 2022 to mark the 60th founding anniversary of diplomatic ties and 45 years since the signing of the Laos – Việt Nam Treaty of Friendship and Cooperation (July 18, 1977).

Exchanging viewpoints on issues of mutual concern, they consented to closely work and support each other at regional and international forums, particularly the United Nations, ASEAN and subregion cooperation mechanisms, thereby maintaining solidarity, unity and the central role of ASEAN amid current challenges in the region and the world.

PM Chính meets with Lao counterpart in Washington have 617 words, post on vietnamnews.vn at May 14, 2022. This is cached page on Talk Vietnam. If you want remove this page, please contact us.